Essential Gear for Starting a Podcast

You’ve got a good idea and the right amount of ambition for starting a podcast, but what’s next? Assembling a DIY mobile and home studio might seem daunting, but it absolutely doesn’t need to be. The best approach is to take one thing at a time, from the right microphone and audio recorder to platforms for music and sound effects.

Below, we get into some of the audio hardware you will need to record your interviews and editorializing (you speaking directly to the audience). We also talk about types of audio software you can use to edit your interviews, add sound effects, and give your podcast musical cues and an overall musical score.

To help you find the right music for your podcast, check out our curated collection of music for podcasts, filled with songs that will make your podcast even more captivating.

When starting a podcast, It’s probably best to think first about a microphone and audio recorder. As we did in our recent article on finding the right gear for becoming a YouTuber, let’s start with audio recorders. 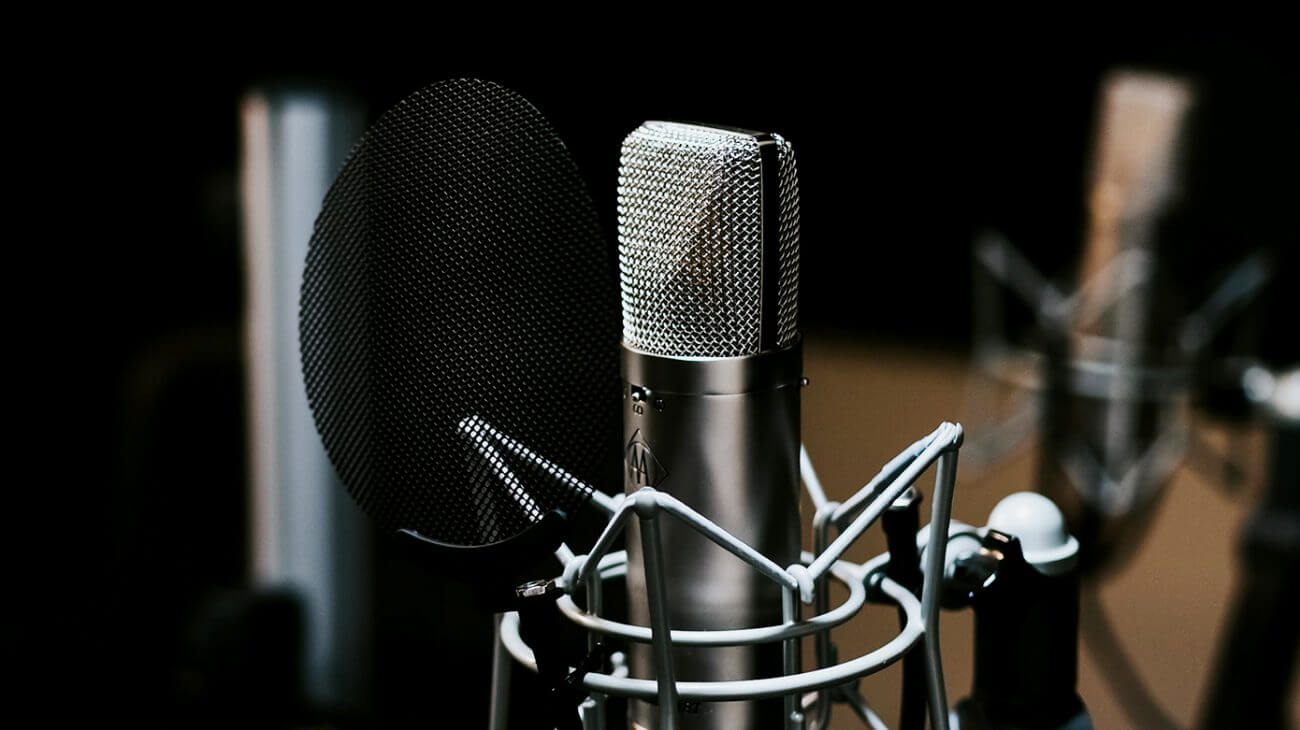 Quite a few different audio recorders exist, a few of which feature really good onboard microphones. The Zoom H4 and H6 series recorders stand out in this category. Tascam also makes several good audio recorders with built-in microphones with the DR series—specifically, the DR-40X and DR-100 MKIII series. The benefit of the mic-equipped recorders is that they are handheld and therefore highly mobile.

These and most other quality audio recorders will allow you to plug external microphones into them. But what sort of microphone is best for podcasting?

The truth is that there is no perfect answer. If you’re doing an in-person interview, the Zoom and Tascam recorder mics will work just fine. Another option is to fix a lavalier microphone to your interview subject’s shirt, a technique that has been used by professionals for decades.

If you don’t want to use a recorder’s onboard microphone or a lav mic, consider getting a directional microphone. With this type of mic, you can set up on a stand and aim it at your subject’s mouth. For convenience, you could get a microphone that allows you to plug into your laptop via USB, but it’s always good to have an option for an XLR analog output, the standard for microphone recording. Audio-Technica makes a great mic, the ATR2100-USB, which comes with both USB and XLR plug options.

All of the examples above will allow you to be highly mobile, easily bringing your recording gear anywhere the story takes you. But, if you want to record directly into your laptop, for instance, you will need an audio interface that can record interviews directly into audio editing software, which we will discuss in more detail in the next section.

An audio interface is a piece of hardware that converts audio from a microphone (or instrument) into a digital signal that can then be recorded and edited as a waveform in audio editing software. Focusrite makes several great and inexpensive audio interfaces, like the Scarlett 2i2 (two inputs/outputs) and 4i4 (four inputs/outputs), which will also be good for music recording a score for your own podcast. Universal Audio’s Apollo Twin USB—with its 4 XLR inputs—is another great option. Ultimately, you will need at least 2 inputs to record a conversation; but, having three or more XLR inputs will allow you to record more than one interview subject at a time.

What type of audio editing software should you consider? If you have a Mac, consider Garageband. It comes free in all Mac computers and gives you basic audio editing features. Another option is Audacity, which is also free—not just for Mac but for Windows as well. If you have a subscription to Adobe Creative Cloud, then you can use Adobe Audition. Other options are Apple Logic (Garage Band’s big brother) or Pro Tools, which can be expensive. 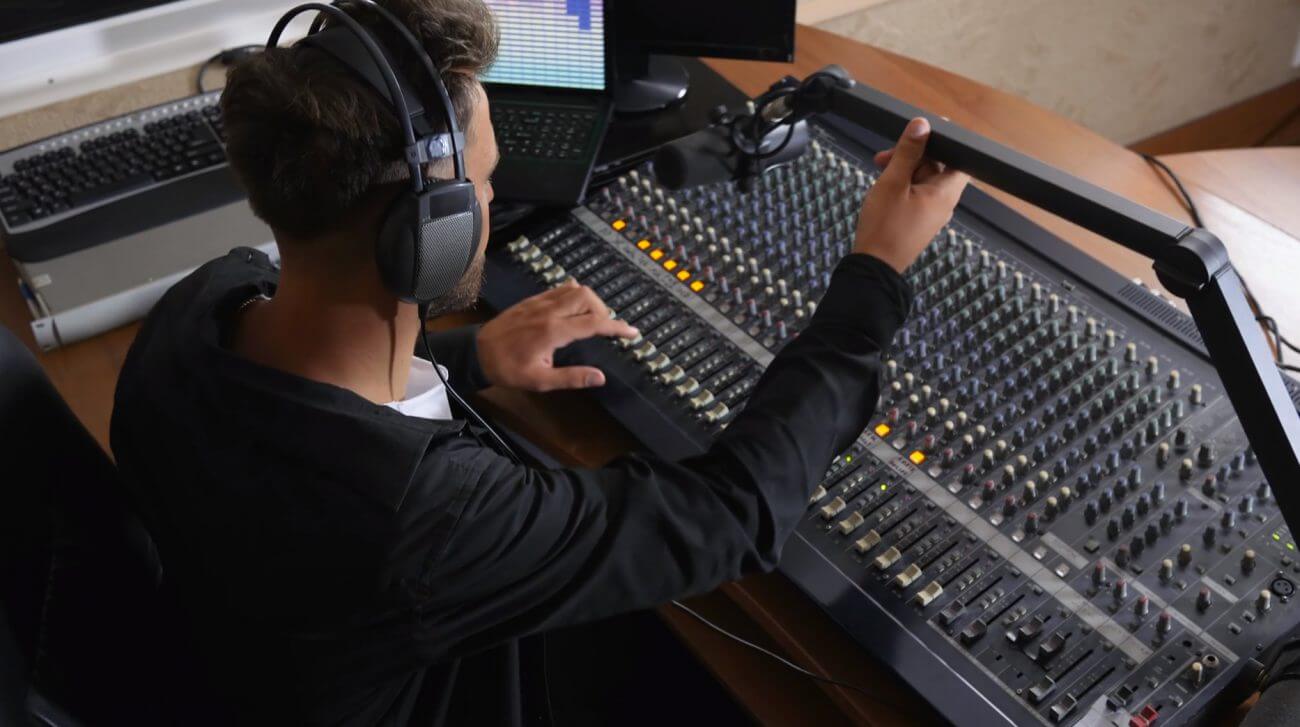 Audio software will allow you to mix your interview, as well as add music and sound effects (more on this below). But, in the future, if you want hardware with knobs and sliders for mixing, consider investing in a hardware mixer.

Early on in your podcasting production, it might be best to just keep things simple. So, whatever your format is (interview, third-person storytelling, etc.), you might want to use music as your non-conversational sound.

You could, for instance, use a piece of music as your podcast’s theme, which could play during the intro and outro sections; but, you could also have other musical cues that play for short periods of time during the podcast itself. These musical cues could stay the same from episode to episode or change every time.

As we’ve discussed in our article on royalty-free versus non-copyrighted music, there are several ways of licensing music. There are a number of different platforms that streamline this process for creatives. Artlist, for instance, has a subscription-based music catalog that users can download to use in their podcast or on their YouTube channel. To make things easier for you, we have curated a special collection of music that will elevate any podcast.

There are several other audio record accessories to consider when starting a podcast. For editing, you will also need some good over-the-ear headphones. Audio-Technica, Sony, Sennheizer and Bose all make great headphones. If you have your own preferences, then just find what works best for your ears.

Look for a microphone windscreen or pop filter, to cut out the sound of wind and pops/spikes that can ruin a recording. A headphone amp will allow you to split the signal if your podcast has multiple hosts. Do not save on XLR Microphone cables, because it might cause you more problems than they’re worth. A shock mount is also useful to prevent sounds caused by nearby vibrations, as will acoustic treatment panels that absorb sounds in your recording/editing space.

Starting a podcast requires a number of essentials, but the first piece of equipment should be owning either a laptop or desktop computer. From there, look into audio recorders, microphones and mic stands, audio interfaces, headphones, and audio editing software. Then start thinking about background music and sound effects by checking out our podcast music collection and sound effects catalog.

Instead of being intimidated by the process of finding the right gear for your style and budget, just have fun exploring the numerous options available to you. Think of it as a learning process and education in audio technology.

10 Common Video Editing Mistakes and How to Avoid Them

Music Talk: For Mika Sade It Was Music That Chose Her