Music and video go hand in hand, elements that complete one another. When matched perfectly, they come together to make a scene a lot more memorable. Just ask Quentin Tarantino. If you take music out of a scene, the whole effect vanishes immediately. Try watching the choppers scene from Apocalypse Now without music – It loses its impact. That is what led to the concept for our Valentine’s Day commercial: making a love scene without music just doesn’t work. As “evidence”, we chose to use foley sound effects to show how three different love scenes would look and sound without music. Spoiler: very bad.

To make every music-less scene as cringe-worthy as possible, we produced special foley sound effects, ASMR style. In case you missed it, ASMR is a global trend that uses the production of a range of sounds, like whispering, tapping and hand movements, to induce a soothing and satisfying sensation. The technique of creating ASMR borrows a lot from the SFX world. However, the sounds we produced were meant to be anything but relaxing. We recorded all the follies in a studio using an AKG 414 microphone and placed it close to our mouths to make them sound really awkward.

You can check out some of the other techniques used in the three scenes of our Valentine’s Day ad – the kiss scene, the nightclub scene and the broken heart scene. 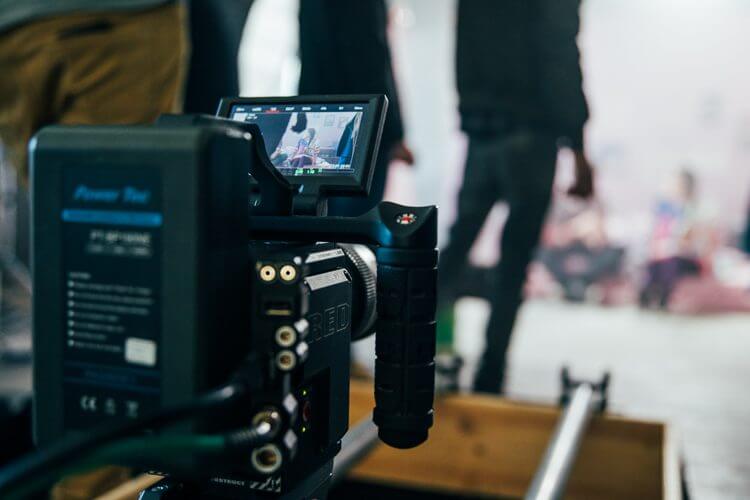 The RigWheels dolly served for the dolly-in shot. To simulate sunlight coming through the shutters and give our subjects great texture, we used the Aputure 120D. To get a nice gradient on the wall, we opted for the Westcott Flex RGB with a daylight temperature (5,600k). Another Westcott Flex, but with more of a tungsten feel, was used for the record player. Lastly, to separate our subjects from the background, we had the Arri SkyPanel as the backlight.

Part of what made this ad really fun to make was hiding Easter Eggs in every scene. All the posters hanging on the wall are Artlist album covers. We wanted all the elements of the ad to relate to the main concept, so on one of the covers, an album titled ‘Freedom’, we changed the text to ‘Mute’.

We shot this scene on a custom-built set, hanging mirrors on the walls to give the space more depth. To emulate neon club lighting, we used Spiffy Gear Spekular lights and added two Westcott RGBs, one pink and one blue, for more depth and style and the Arri SkyPanel on flicker mode to draw the audience into the nightlife scene.

As for the Easter eggs, we hung some Artlist album covers on the walls. The mute sign you see in the back, lit with Spiffy Gear practicals, is there to emphasize the point that a club without music is basically an oxymoron.

This scene involved some visual effects and compositing. Like in our Made for Creators commercial, here we also used practical effects to enhance the VFX. We did it with the Westcott RGB red light shining on the road and with the rain, which came out of a firehose.

In post-production, we did some mat painting to extend the parking lot and added some rainfall and raindrops on the road. To tie it all up, we composited in the billboard, which is another album cover – our last Easter Egg.

In our Valentine’s Day ad, we wanted to make the point that music for video is essential. Hopping on the ASMR trend to create foley SFX, using practicals to enhance VFX and especially hiding those Easter eggs made this ad very fun to shoot. Hope these tips helped you out. Join us again for more useful production DIY techniques and some post-production tips. Stay creative!

A Beginner’s Guide to Working with Audio in Premiere Pro