What Types of Video Cameras Are Out There for Creators?

When you start researching all the different types of cameras out there to choose your first video camera, it can get pretty overwhelming. We live in a world filled with fantastic technology, where people are creating award-winning films with an iPhone or a top-of-the-range cinema camera that costs close to a million dollars by the time it’s all kitted out. So where do you fit into all of this? How do you decide which type of digital camera is the right one for you? On top of the endless mirrorless vs. DSLR debate, you’ve got new releases all claiming to be one of the best low-light cameras or slow-motion cameras around…you name it! You’d be forgiven for getting a little confused. 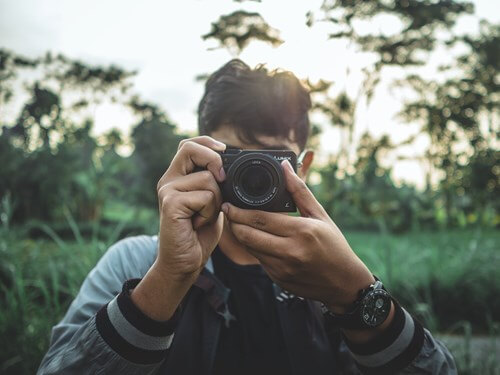 If we’re talking beginner cameras, the compact point-and-shoot can be a great place to start. They’re called point-and-shoots because…well, that’s precisely what they do. The ease of use is great because you can literally just pick one up and pretty much start rolling straight away. They’re small cameras, so they’re very lightweight and often very affordable.

Of course, there is the concern that you don’t have access to interchangeable lenses. Since the types of lenses available to you can make a huge difference to your filmmaking, bear that in mind. Having said that, more advanced compact cameras nowadays have some great zoom options and allow for manual exposure and better image quality. 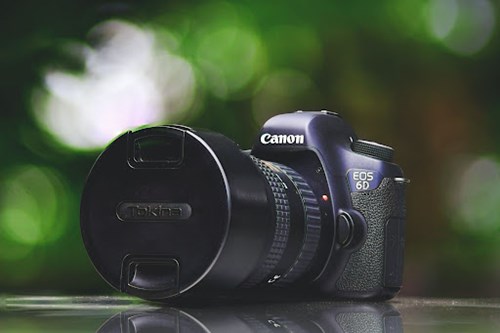 Out of all the types of cameras available, the DSLR is perhaps the most well-known and established. This type of digital camera has been around for a fair while, and it can do whatever job you need. The DSLR is a trustworthy companion whether you’re shooting sports events, weddings, documentaries, travel videos or whatever else.

No matter which model you opt for (and there are many types of DSLR out there), you can rest assured that you’ll get professional-level image quality as a standard, full manual control over all your settings and a wide array of lens choices. As for price, They range anywhere from the affordable, beginner-friendly options all the way to very expensive, professional-level models, so there’s something for everyone.

You can check out our article on some of the best DSLR cameras. 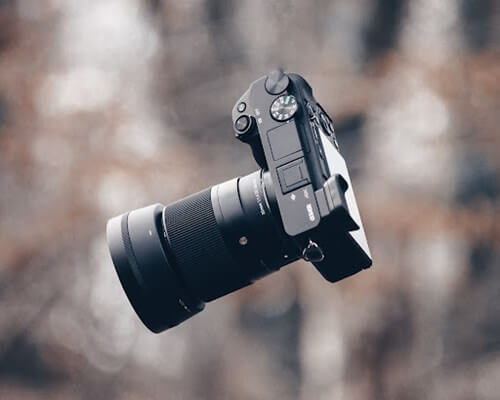 We’ve talked about it extensively here at Artlist, and the debate will rumble on. Still, many professionals are making the switch from DSLR cameras to mirrorless systems. The image quality that mirrorless cameras are capable of is exceptional, and out of all the different types of cameras out there, they’re certainly the best when it comes to low-light performance (aside from cinema cameras – more on them below).

The mechanics of the system (see mirrorless vs. DSLR to refresh your knowledge) means they’re often smaller, lighter and quieter than their DSLR counterparts. It seems to be the go-to technology of the future, and if I had to choose between the 2, I’d certainly go for mirrorless. That being said, they are often more expensive and may also be lacking in battery life and lens options. So, read our articles and research the key differences between the 2 types of cameras before purchasing. Every creator has different needs, and the right type of digital camera for me may not be the best for you.

Even amongst the mirrorless cameras, there is an array of different models. The Sony FX3 vs. a7s III is a clear example of this.

Cinema cameras wouldn’t usually be one of the choices of an aspiring creator, but it’s good to know about them.

They’re large, eye-wateringly expensive and certainly weren’t designed for use by creators making YouTube videos. However, they’re also exceptional, and a growing number of high-profile YouTubers do shoot their content with cinema cameras nowadays. Cinema cameras are used by the best for a reason. The image quality is 2nd to none, and if you really want to use the best of the best, cinema cameras are probably the way to go.

We’d recommend starting off in your career with a mirrorless or DSLR system while you’re learning the ropes before you think about making such a big commitment. 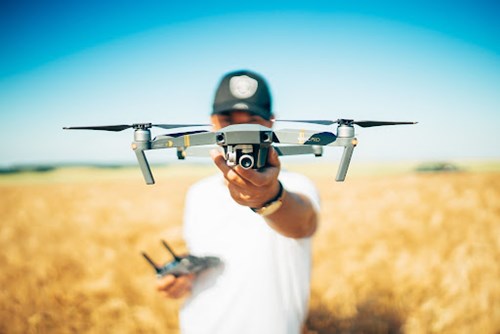 As you’re learning, there are all kinds of cameras out there but…how many of them can fly? Drones are a great niche. While they might not be your primary camera for shooting an entire documentary, they provide a lot of value to your film production.

Drones are simply flying cameras. They’re small cameras attached to a remote-controlled flying quadcopter. While their quality certainly won’t rival your DSLR or mirrorless, they’re improving all the time. Drones allow you to make use of a much larger 3D space. They give you access to different angles and perspectives previously achievable only with an expensive crane, jib arm or an even more expensive helicopter hire! While they’re not a necessity, I really think a drone compliments any filmmaker’s kit, and I certainly wouldn’t leave home without mine.

Industry leader DJI provides several different models for all abilities, and in even more exciting developments, they have recently stepped into the First-Person-View drone arena with their own FPV model, which is allowing people to get closer to the action than ever before, capturing all kinds of wild, epic and dynamic shots. 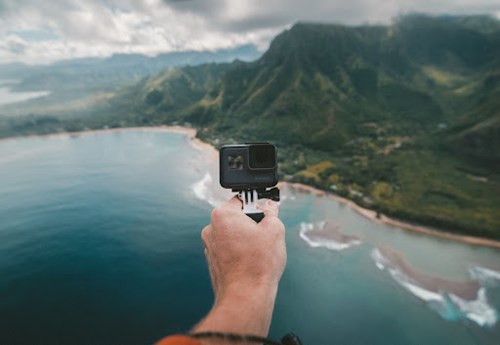 Adventure cameras, action cameras…call them what you want, and like drones, they are role-specific. Again, you wouldn’t be using this to shoot a full-length documentary (I guess you could if you wanted to), but they do play an important role in my filmmaking kit.

I love my GoPros because they’re so small and lightweight (easy to transport around), and they’re rugged as hell. Whether strapped to your head climbing a sheer rock face or 10 meters underwater, they get the unique up-close-and-personal shots that few other cameras can. They give your audience an excellent idea of what it’s like to be in the thick of the action. When you splice in the footage alongside drone and DSLR/mirrorless footage, it can all really help in fleshing out your film.

While the image quality (especially in low-light conditions) or audio quality won’t always be perfect, if you have the budget and need for one, it’s a no-brainer. And, of course, there are a fair few GoPro competitors out there now, too. 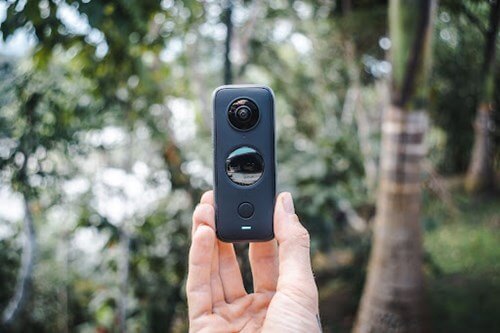 An interesting (and relatively recent) development in the ‘action camera’ space is the rise of 360 cameras. Just like your trusty GoPro, you can attach these just about anywhere, and they’re incredibly rugged, small and lightweight.

Effectively, these are just adventure cameras, but with one huge difference. Having the ability to capture your full 360° surroundings gives your audience a whole new viewing experience. It can also save you from shooting multiple pieces of footage and splicing them together in the edit since you can just switch your viewing point at any given time. They work best for adventure and ‘real life’ films where you’re looking to really capture what it feels like to be there.

Of course, there are significant drawbacks. This kind of viewing experience is unique and can only be achieved with digital viewing. The resolution will be low, and it may take a while to process and stitch all the footage together in the edit. It’s a very specific niche, but a cool one. 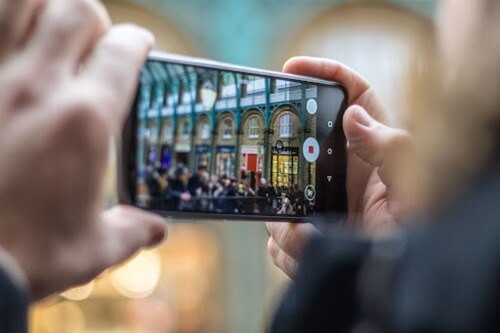 There’s that old saying that the best camera is the one you have with you… that rings truer than ever today. Shooting videos with your smartphone is becoming ever-more appealing. It’s pretty crazy that you can now create award-winning pieces of work with such a small device. The technology has come on leaps and bounds over the past 10 years and only looks to be accelerating. Perhaps someday in the future, we won’t even need mirrorless or DSLR cameras? Who knows. It would certainly help us in narrowing down all these different types of cameras.

Of course, there are certain limitations to shooting with a smartphone, so you’ll need to decide what your primary needs are and the types of films you will be making. In addition, there are certain accessories such as lens clamps, microphones, and gimbals that could further enhance your mobile device for filmmaking. 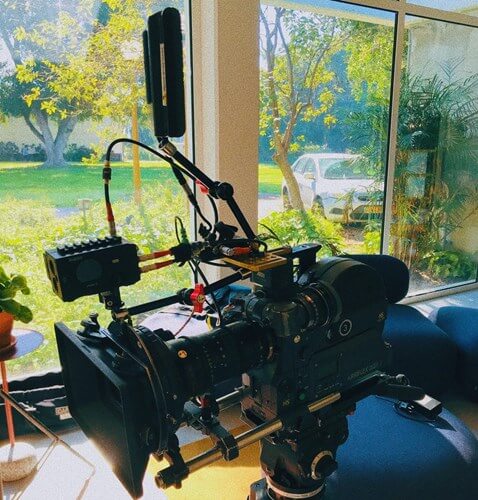 You may think that old film cameras have been assigned to the history books with the rise of all these different types of digital cameras, but the truth is, a camera doesn’t have to be digital to be a high-quality camera. Instead, film cameras offer a very nostalgic, emotional look. Yes, they are harder to operate and shoot with and certainly more expensive when you have to buy the film and manage how much you shoot, but that’s not stopping people.

You may well have noticed that creators are bringing back the ‘Super 8 look’ in a big way. While overlays (for example, film grain) could give that retro style, purists will argue that nothing can quite convey that emotion and nostalgia the way film does. Of course, it’s not a necessity for creators to have one, and it actually makes the filmmaking process a whole lot more difficult and expensive, but the option is there if you ever have the urge.

Camcorders are another one of those video cameras you think is probably in the history books. Think back to footage of camera ops in the early 2000s working in live news and broadcast TV. The camcorder came glued to their hand. And it seems now, after some years in the wilderness, they may be making a comeback. That’s if Canon’s XF605 announcement is anything to go by.

Camcorders continue to be a go-to option for many one-man-bands who are working solo. They’re solid, durable machines dedicated to the sole purpose of capturing video and the newest models really deliver at the forefront of what makes a good, usable camera for video. You’ll find they have 4K, built-in stabilization, fantastic focal range and plenty of accessory options, combining for a highly worthwhile investment for the solo filmmaker.

Wrapping up the different types of cameras

So, there’s a breakdown of all the types of cameras available to you as a creator. There are so many different kinds of cameras on the market that it can get very confusing very quickly. So we hope that this article has helped lay it all out for you in a concise, accessible way. Once you’re armed with the knowledge of what types of digital cameras (or film cameras) are available to you, you can narrow down your choices and find the one that’s right for you.