Cinematic Footage and the Types of Camera Lenses You Should Use

Learn the difference between the 2 types of lenses – Prime and Zoom
Check out the different types of Prime and zoom lenses and see examples of classic films shot with them
See why you need to take into consideration things like lens speed, crop factor, f-stop and sensor size

Capturing cinematic footage requires many things. Great framing of a scene, the right positioning of the human body, the camera’s movements, and an overall sense of what makes a great composition, which can include colors, textures, patterns, etc. One thing that will make any filmmaker’s life easier is a good lens—or several types of camera lenses, for that matter.

Together with a digital camera’s sensors (or a film camera’s film stock), each lens will give the resulting footage a particular look and detail. Whether you’re shooting a narrative film or a YouTube video, experimenting with different types of camera lenses will certainly help in shooting cinematic footage.

The 2 types of camera lenses

In cinematography and photography, there are 2 types of camera lenses—prime and zoom lenses. Most people are familiar with zooms but not primers, so it will be helpful to define the two lenses. But, first, we should introduce the notion of focal length, as it’s integral for understanding prime and zoom lenses.

In camera optics, focal length is a measurement—in millimeters—between a lens’s optical center and the camera’s sensor; or, film plane, when talking about analog film cameras. Film lenses are named after their focal length (more on this in the next section).

A zoom lens, as might have been guessed by now, can have variable focal lengths. In other words, with a zoom lens, camera operators can zoom in and out to create the image they want. On the other hand, a prime lens has a fixed focal length—meaning it cannot zoom in and out. Instead, camera operators must physically move a camera toward a person, object, structure or landscape to capture it in greater detail or move far back to capture things in wide-angle.

There are many schools of thought on what lenses to use, and each filmmaker will have their preferences. Think of the following lenses not as rigid rules for cinematic motion picture-making but as a guide to begin exploring the wondrous world of lenses.

A wide-angle prime lens—anywhere from 14 to 20mm or more—is a great tool in a filmmaker or camera operator’s arsenal. The effect it has on scenes is to emphasize a character or object in the foreground from the background scenery. When used to capture an interior or specific exterior location, it will really make the visuals have some pop.

Unlike other types of camera lenses, there is no flattening of foreground and background. The foreground details are emphasized and exaggerated. One thing to note is that a wide-angle lens will distort a person’s face or objects. But, if you want some distorted aesthetics, then a wide-angle prime lens in this range might be for you.

Terry Gilliam, the director behind 12 Monkeys, Brazil, and other surrealist classics, is well-known for using the 14mm and shooting Dutch angles with it. The 14mm has even informally been called “The Gilliam”. As you will notice in his films, the 14mm lens, along with his placement and framing of the camera, really gives his actors and scenes a sense of surreal distortion.

In his movies, Amelie and Delicatessen, French director Jean-Pierre Jeunet used an 18mm lens to create the distorted closeups. But, he also used it to capture cityscapes and landscapes. And many other filmmakers have used the 18mm lens for precisely this versatility.

*21-25mm lenses are also great for closeups. Stephen Spielberg, for instance, is known for using a 21mm lens (with 35mm motion picture film)—which, along with his great talent for blocking a scene, allows him to capture actors and other details as they (or the camera) moves through scenes.

The 50mm is a classic lens that probably every filmmaker should, at some point, think of using. The “Nifty Fifty”, as it is known, is versatile and really great at capturing scenes with 2 actors in them.

It’s been said that the 50mm lens and the 35mm are great for realism, as they approximate how humans see the world. It’s also cheap and light, with some nice out-of-focus bokeh (TK). And because it’s light, the 50mm lens becomes a great option for handheld cinematography.

Alfred Hitchcock was a big fan of the 50mm, and you can see it in his films. Unlike Gilliam and Jeunet’s films, there is hardly any distortion in Hitchcock’s films—just the details of the scene rendered in a realistic, though still a uniquely cinematic way. Iconic Japanese director Akira Kurosawa also used the 50mm and other types of camera lenses at focal lengths down to 35mm—again, to replicate how the human eye sees things.

Less common is the telephoto or “long” lens in filmmaking. However, Ridley Scott—especially on Blade Runner and Alien—used the 75mm long lens (and apparently the 50mm lens for certain shots) for cinematic shots. Granted, Blade Runner had massive and expensive sets, so there was still a sense of depth despite how telephoto lenses compress foreground, middle ground, and background details. 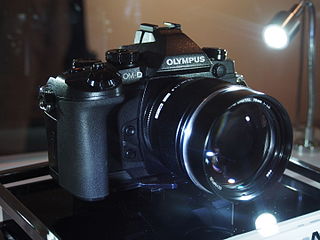 If you use a long lens, make sure the scene you’re shooting has a lot of detail. Very, very few people get to shoot on a set like Scott’s Blade Runner. But, with the right camera movements and eye for the right interior and exterior locations, you too can create a cinematic scene with a telephoto lens.

While it may not appeal to all established filmmakers, a good zoom lens is a great tool to have. There are several reasons why.

First of all, you won’t need to break the bank in buying a half dozen lenses. Instead, you can get a zoom lens like the 24-105mm, which comes standard with, for example, Canon 5D cameras.

This zoom also gives you plenty of versatility. If you want a slightly distorted close-up shot, you can get it by zooming into 24mm. If you want a telephoto effect for certain shots or an entire project, you could zoom out and move the camera around—whether handheld or on a tripod—to get the shots you want.

Not to fixate on Canon, but the company also offers a 55-250mm telephoto lens with a low f-stop with a range of f4 to f5.6. That’s an incredible range of focal lengths for a zoom lens. 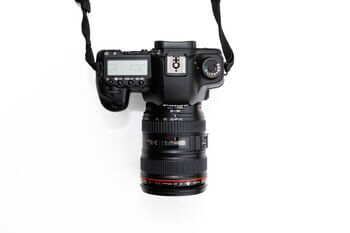 That said, if you get a zoom lens with this type of range, you’ll need a wide-angle prime lens or two for your cinematic arsenal.

Almost all types of camera lenses are spherical. But there is a special class of lenses, called anamorphic, that gives filmmakers flexibility with the aspect ratio (width and height of projected footage) of their motion picture images.

Spherical lenses don’t affect the aspect ratios. Anamorphic lenses, however, do. When an anamorphic lens is used, the image is compressed while recording and then stretched out to achieve wide and cinematic aspect ratios in post-production. Directors like Quentin Tarantino and Wes Anderson are fond of using an anamorphic lens, but they can get quite expensive and may not be the right choice for most filmmakers.

Another thing to think about is lens speed. If you’re trying to capture cinematic footage for your short film or YouTube video, you will want a lens with a wide aperture that can let a lot of light and detail in.

A fast lens has a low f-stop number. A really fast lens would be something like a 1.4, but this can get expensive. So, you can also look for f-stops of 1.8 and 2.0.

If you need to, rent some of the lenses mentioned above. Experiment with primes and zooms and with lenses that have a range of low f-stops. With practice, you will find the right cinematic lenses for your project.

Basically, F-stop is a measurement of how wide a lens aperture is. When an aperture’s blades (the diaphragm) are widened, the F-stop (or F-number goes down), and when the aperture is gradually closed, the number goes up.

This is the best way to understand F-stop. But, if you want the optical definition of F-stop, it’s the ratio of the lens’s focal length to the aperture diameter.

Fast lenses have low f-stop numbers. A really fast lens would be something like a 1.4, but this can get expensive. So, you can also look for f-stops of 1.8 and 2.0.

If you need to, rent some of the lenses mentioned above. Experiment with primes and zooms and with lenses that have a range of low f-stops. With practice, you will find the right cinematic lenses for your project.

Another factor that will determine how lenses interact with a camera is its sensor size. In digital cameras, the sensor size is a measurement of the sensor, with 35mm film being the benchmark against which it is compared. 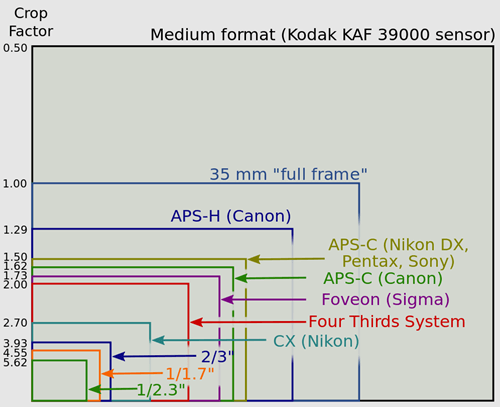 DSLR camera sensor sizes are either APS-C (Canon uses 22.2 x 14.8 mm, while others are 23.5-23.7 x 15.6 mm) or Full Frame (36 x 24 mm). Full frame is a buzzword these days in digital cinematography, as the 36 x 24mm sensor size comes closest to motion picture 35mm film. In other words, a lot of information can be packed onto that sensor, just as more light can be exposed onto 35mm film versus, say, the much smaller 8mm film format.

As mentioned above, DSLR cameras have significantly smaller sensor sizes relative to the reference size of 35mm film. So, when filmmakers started using DSLR cameras with the lenses that had been optimized for 35mm film, they saw that images were being cropped. Another way of thinking about it is that although a DSLR or 35mm film camera can be using the same lenses, getting the same optical information through the circular lens, the DSLR camera will crop out more of the field of view than the 35mm film camera.

To calculate the crop factor relative to 35 mm film, you just multiply the camera’s crop factor with the focal length of the lens. So, for example. If you use a 24 mm lens on a camera with a crop factor of 1.5, you get a total crop factor of 36 mm.

To recap, there are many types of lenses that would give your video a cinematic look even on a DSLR. The best cinema lenses have are called “fast lens” and they have a wide aperture and low f-stop numbers. To determine what the best cinematic lens is for you, it’s worth renting out different types of camera lenses and experimenting with various apertures.

DJ Pangburn is a New York-based journalist, videographer, and fiction writer, with bylines at Vice, Fast Company, Dazed and Confused, and other publications. DJ records ambient techno and IDM under the name Holoscene.