FX3 vs. a7S III ― Which Sony Digital Camera Should You Choose?

Things are getting a little confusing over in the world of Sony digital cameras. Until now, those of you filmmakers who had just purchased the brilliant Sony a7S III were probably feeling very satisfied and secure in your camera choice. With reliable autofocus, buttery-smooth image stabilization, solid ergonomics, long battery life, beautiful full-frame 4K footage up to 60p and 4K 120p with a slight crop, it’s a real winner.

But then, in what many see as nothing less than a slap in the face to these new Sony a7S III owners, Sony has confounded us all by announcing the Sony FX3. So. . .what was Sony thinking? Is the FX3 better for video? Should you make the switch? Read on for everything you need to know about the FX3 vs. a7S III debate.

First and foremost, let’s compare price since it’s the first thing we look at when comparing any two cameras. The talk around Fx3 vs. a7S III is no different. Here’s how they shape up:

Footage from Artgrid shot on the Sony a7S III

So, in short, when it comes to image quality, both the FX3 and the a7S III are nothing short of exceptional (and identical), as expected from Sony digital cameras. You’ll have a tough time differentiating between the two here.

How about ergonomics, then? The difference in size and weight is negligible. With batteries loaded, the FX3 weighs in at 715g, while the a7S III tips the scales just below 699g. That minute difference won’t impact how you shoot.

In general, both cameras handle really nicely. However, there are some key differences in design. The a7S III is much more of a ‘classic’ Alpha series camera. The shape and overall finish reflect a slow evolution of Sony’s flagship models over the past few years. This may well be more comfortable and familiar to a lot of people. The a7S III also features the coveted swivel-and-tilt LCD monitor. 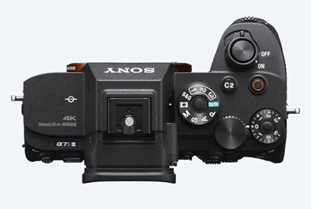 The a7S III is more of a ‘classic’ camera. Source: sony.com

On the other hand, the FX3 has some big differences. Unfortunately, the monitor only swivels. Sony has also done away with the viewfinder, which may irk some of you. However, where the viewfinder once lived, you can now attach the top handle that comes bundled with the camera. This is great for obvious reasons because a) it allows you to hold the camera much more steadily from above, and b) they’ve included twin XLR/TRS terminals―the standard for pro audio in filmmaking.

The FX3 is a video-only camera. source: sony.com

While you can purchase an XLR adapter kit for the a7S III, it’s nice that the FX3 just comes with balanced audio straight out the box. Sony clearly intends to market the FX3 as the go-to camera for professional-quality videography and filmmaking.

That ambition has been further advanced by the thread holes you can find on the body. You’ll find five ¼-20 UNC threads on the body and 3 more on the handle. These effectively turn the camera into a cage, ready to go. Again, with the Sony a7S III, you could choose to invest in a cage, so having these features built into the camera gives the FX3 a slight edge here.

The Sony FX3 comes with balanced audio straight out of the box. Source: sony.com

As mentioned above, it does seem that the FX3 has the advantage straight out of the box when it comes to audio. The FX3 arrives ready to roll with 2x XLR/TRS, 4ch 16-bit 48 kHz LPCM + 1x 3.5 mm jack (2ch), while the a7S III comes with the 1x 3.5 mm jack, 2ch 16-bit 48 kHz LPCM. Of course, once you purchase the XLR adapter kit for the a7S III, the two become pretty much indistinguishable once again.

As the story goes with this FX3 vs. a7S III battle, there really isn’t any difference between the 2 when it comes to autofocus. Both perform amazingly well, as we have come to expect with Sony digital cameras. Both utilize the same focus aids, too―the tried-and-trusted zebra markings, histogram and in-camera meter.

That said, if Sony really wants to position the FX3 as the go-to choice for professional filmmakers and videographers, they could have added something extra, such as in-built false colors and waveforms. A future firmware update, perhaps?

No surprises here. Both have amazing in-house image stabilization. One plus point for the FX3 here is that it produces gyro information. But to stabilize the footage using that data, you’ll need to use Sony’s Catalyst software, which can be a time drain.

If you’re hoping to pick a clear winner between the FX3 vs. a7S III, you won’t determine it by comparing battery life. Both use the same battery, and the FX3 will crank out a mere 5 minutes more―a negligible difference.

So far, it’s hard to find much of a difference between the FX3 vs. Sony a7S III. But on closer inspection, there are a few key differences that may well sway you one way or the other.

Does the FX3 shoot stills?

As we’ve already discussed, the FX3 doesn’t have a viewfinder making it a video-first camera. Another clear sign that it’s been expressly designed for videography and filmmaking is that it comes with a top handle. The a7S III does have a viewfinder giving it an edge when it comes to taking stills.

The FX3 also has a tally lamp―a small light that indicates to both operator and subject that the camera is recording. You’ll find a zoom lever, too. It might be useful, it might not, depending on how you use it.

Does the FX3 overheat?

There’s just one last thing―the real, key differentiator between the two. While the FX3 loses the viewfinder, it’s gained a fan for overheating issues. It’s well-known that some Sony digital cameras have overheating issues, and the a7S III is no exception. After 1 hour of shooting in 60fps ALL-I, it will overheat. After about 30 minutes of shooting ALL-I 120fps, it also overheats.

Sony has proudly claimed that the FX3, with its built-in fan, can record continuously at 4K 60p with no limit and no overheating. This is a winning point, for sure.

What are the main differences between the Sony a7S III and the Sony FX3?

The FX3’s main advantages lie in the XLR inputs, top handle and cooling fan, while the a7S III is better for still photography thanks to its viewfinder and its cheaper price.

Conclusion – is the Sony FX3 worth it?

Ultimately, then, it’s clear that Sony has designed the FX3 first and foremost for video and filmmaking. However, are there enough differences to distinguish it from the a7S III when you consider the latter’s advantages for taking photographs?

Apart from the one genuine standout feature of the fan addressing overheating issues, we’re not sure if it was really necessary for Sony to introduce the FX3 with the a7S III already serving this market so well. Perhaps with some firmware updates, it could become the game changer Sony wants it to be. But we just can’t help shaking the feeling that the FX3’s few distinguishing features could’ve been wrapped up in the a7S III. Perhaps this raging FX3 vs. a7S III debate never needed to happen.

In short, we’re going for the easy cop-out option here: We think that you’ll be happy with both. Don’t blame us. Blame Sony!

If you’re in the market for a new camera or just generally interested in the world of cameras, why not check out some of our other articles? We’ve covered the best mirrorless cameras of 2021, the best DSLR cameras of 2021, as well as addressing the whole mirrorless vs. DSLR debate.

Use This Filmmaking Hack in Your Product Video

An Introduction to the Camera Polarizer Lens: Why You Should Start Using Polarizing Filters

Is the Future of Video Journalism in Social Media?