All over the world, you’ll find filmmakers who own a GH camera or have done in the past.
It’s a household camera line, and once you dig into the specs and 13 years of evolution, it’s obvious why.
Discover all 6 iterations of the GH camera series, including the GH6 – the new Panasonic GH camera.

I’ll start this article by admitting that I’m potentially biased. I’ve been shooting with the Panasonic GH5 for 4 years now, and I adore this camera. But I’m not the only one. Throughout the filmmaking world, you’ll find plenty who agree that the GH series is undeniably one of the best lines of cameras out there. This evolution continues to impress with the latest release of the slick GH6. The success and greatness of this camera are further underlined by the mass of stock footage shot with it on Artgrid.

But where did this all begin? Today, we’re taking a look back at the evolution of the Panasonic GH series and its impact on the filmmaking world, as well as the Panasonic brand as a whole.

Panasonic is a major Japanese multinational conglomerate corporation headquartered in Kadoma, Osaka. While you may know it best for the Lumix GH series, it’s actually been around since 1935! Throughout the 20th century, it was the world’s largest producer of consumer electronics (everything from washing machines to kettles, blenders and hairdryers). To this day, it offers a wide range of products and services, including rechargeable batteries, automotive and avionic systems, industrial systems and plenty more.

Of course, as filmmakers, we know it for the Panasonic GH cameras and several other models. Here’s a breakdown of their various lines that all fall under the “Lumix” brand:

Ultra-compact and high-end with a stylish look targeted at photography.

Compact ultra-zoom models on the higher end of things. They’re quite large and have extensive controls with a 12x extending zoom lens.

They resemble digital SLRs, but key differences include non-interchangeable and non-extending zoom lenses.

These SLR-style mirrorless cameras have proven popular. The G100 and 110 are great for vloggers, the G80/85 & G90/95 more than hold their own for YouTube filmmaking and the G9 is Panasonic’s highest-end Micro Four Thirds camera for photography.

The much-beloved Panasonic GH line is a high-end SLR-style mirrorless Micro Four Thirds system. Focused on video, it is renowned as a compact, rugged workhorse that punches far above its weight.

These rangefinder-style mirrorless cameras are on the lower end, with no viewfinder or hot shoe.

Another rangefinder-style mirrorless camera that’s in the mid to lower range, including the GX80/85/7 Mark II and GX800/850/GF9.

Panasonic’s new flagship line uses the new L-mount, and it’s their first full-frame mirrorless camera, reflecting the competitive market in which Sony has asserted real dominance. You’ll find either the S1R for ultra-high resolution or the S1H for more video-orientated purposes. There’s also the S5, a mid-range full-frame mirrorless camera with contrast-detection autofocus.

This is a line of DSLR cameras using the Micro Four Thirds system. It was one of the first DSLRs capable of displaying a live image view!

This is undoubtedly Panasonic’s cheapest line. They’re budget plastic compact cameras that are powered by 2x AA batteries. Not much else to say about these…

As you can see clearly, Panasonic has made a lot of cameras over the years. Still, without a doubt, the Panasonic GH line has had the biggest impact – certainly for filmmakers at least. Below, I’ve mapped out the line from beginning to end. It’s been a fascinating evolution for the GH camera.

Released in 2009, the GH1 was Panasonic’s flagship Micro Four Thirds system, marketed as a new class of “creative HD hybrid” cameras. It was a very early marker of the shifting tide in the mirrorless vs. DSLR debate.

It could take both still photos and full HD video, with full manual control over most of the video settings. Features considered groundbreaking at the time included a new multi-aspect image ratio sensor, full AVCHD HD video capability, stereo sound recording, dual CPU image processing and a super zoom lens optimized for video. It was a promising early marker for Panasonic, laying a solid, successful foundation on which to build.

This relatively new review of the GH1 from Steven Heise is an interesting watch:

The successor to the GH1 continued to build momentum for the Panasonic GH line, boasting full HD video recording 24fps at 30mbps and 720p up to 60fps. Upgrades included a touch-screen display, a dedicated video button and a widened viewfinder that increased the number of dots to 1.53 million from the GH1’s 1.44 million. There was also the addition of an external stereo microphone socket which was unusually a 2.5mm socket rather than the now universally accepted 3.5mm.

What’s most interesting and renowned about the GH2 was the widely available custom firmware hacks that helped further strengthen this particular GH camera, positioning it as a firm favorite among many filmmakers. Most notable of these hacks was the option for higher bitrate capture for both video and audio, beyond the constraints of AVCHD. I was really impressed by this cinematic edit shot on the camera. It’s incredible what it’s capable of when in the right hands:

The third iteration of the Lumix GH series was impressive. You could now record in full HD resolution at up to 60fps with a bitrate as high as 72mbps. This, coupled with its capacity for external microphones, meant that it could easily hold its own in semi-professional filmmaking.

Its evolution from the GH2 included a boatload of features:

As you can see from John Luna’s cinematic travel video, the quality of this thing was amazing, especially for its price point and release date of 2012. Even now, in 2022, it’s a great beginner video camera: 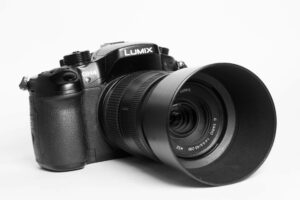 The GH4 was seen as a real game-changer. And despite the release of the GH5 and GH6, it’s still widely used by many filmmakers to this day. Released in 2014, it was the world’s first mirrorless interchangeable-lens camera capable of recording in 4K. Physically, it was quite similar to the GH3, adding a few minor tweaks such as a locking mode dial, a more detailed rear LCD screen and an electronic viewfinder.

But it was all about the 4K. This was the first time a GH camera could be categorized as “pro-level”, recording in both Cinema 4K mode (4096 x 2160) or standard 4K-UHD (3840 x 2160). There was also the useful addition of focus peaking, zebra overlay, luminance level adjustment and cinema gamma presets, all of which, when combined with the compact size and weight, cemented it as a filmmaker’s favorite. Even today, it’s considered one of the best beginner YouTube camera options out there.

This gorgeous cinematic edit from Lorenz Hideyoshi Ruwwe demonstrates just how much the GH4 is capable of:

When Panasonic released the GH5, it was love at first sight for me. The GH4 was a roaring success, and there was much anticipation about this next installment of the GH Panasonic series. Thankfully, it was delivered in spades.

The GH5 was the first mirrorless camera capable of shooting 4K video with 10-bit color and 4:2:2 chroma subsampling, as well as recording 4K in 60p or 50p. In addition, it boasted no time limits of 4K or full HD video capture and was freeze-proof, dustproof and splash-proof. But perhaps the most significant upgrade on the GH4 came with an impressive 5-axis in-body stabilization.

Smaller tweaks such as a second memory slot with UHS-II interfaces to support 400Mbps capture or the first hybrid camera to offer a waveform display, vectorscope and exposure and color monitoring tools have made it one of the great filmmaking cameras of the last decade. Even the best mirrorless cameras in 2021 were only just catching up to some of the video features available here.

It was no surprise to see Panasonic building on that wild success with the release of the GH5s in 2018. The upgrade offered filmmakers greater low-light sensitivity (and directly addressed the fact that the GH5 was never the best low-light video camera). And they followed it up in June 2021 with the GH5 Mark II, which was fitted with a fancy new processor.

For me, the GH5 continues to deliver daily and has done for the past 4 years. Here’s a little cut I shot handheld in London back in 2020:

And here we are…13 years after the GH1 was first released. In the early days, it wasn’t a guarantee that the Panasonic GH series would become the trustworthy video camera line to beat. Today, there’s little argument about it, and the GH6 is a consolidation of that.

This new Panasonic GH camera can shoot UHD 4K up to 120fps or even full-width 5.7K at 60fps. Building on the GH5, there’s an impressive expansion of codecs, including the industry-standard ProRes 422, plenty of other 10-bit options and a somehow-even-better in-built stabilization. To show they mean business, there’s now just a single UHS-II slot that’s been paired with a CFexpress Type B format (this was probably necessary given the specs on the show), as well as an in-built fan.

All in all, it’s an absolute beast that continues to assert the Lumix GH line as one of the best, industry-leading, most reliable lines of video cameras around. Just look at how good this short film from Tommy Rowe is. All shot on the GH6:

Where next for the Panasonic GH?

It’s quite remarkable that in just 13 years, the Panasonic GH series has come so far. Of course, like any other camera system, there are inevitably some flaws and things we’d like to see addressed in future models. For example, it’s irritably bizarre that Panasonic stubbornly persists with a far-from-perfect DFD autofocus system. We’d like to see that change in the GH7 or whatever comes next. The market is increasingly competitive, too, and with 8K footage now creeping into new camera releases, we’d expect Panasonic to take a look at that.

It’s going to become harder and harder to stand out from the crowd and produce a camera that’s truly groundbreaking and industry-leading, but as these past 13 years have shown, if any camera can do it, it’s the GH camera.

The Panasonic GH series is an iconic line loved by filmmakers the world over, including me (if you hadn’t already guessed). Hopefully, you’ve learned a thing or two about the various models here, which can help inform you in your research. For example, perhaps you’re looking into new vlogging gear, or weighing up the argument for a Panasonic GH5 vs. Canon R5.

The Great Mirrorless Camera Showdown, Round 1

The Best Cameras Under $1,000 for Video Creators

Giving Your Footage an Authentic Vintage Look in Premiere Pro