How You Can Become a Twitch Streamer

When it launched in 2011, Twitch was initially envisioned as a streaming platform for gaming. A way for gamers to stream their play and for others to watch it. People could watch their friends play video games from afar; or watch well-known, professional gamers battle the computer or other pros.

More than that, a Twitch stream could, for its creator, become a way of monetizing content through a tier of subscriptions. Others could make money on Twitch by creating emotes—emoticons that, much like emojis, could be used in the comment section of a live stream.

Even before the COVID-19 pandemic boosted the platform’s popularity, Twitch has already outgrown its original vision of being just a live stream platform for gaming. Twitch has become a platform for anyone looking to livestream and monetize content.

It’s worth noting that Twitch recently experienced somewhat of a copyright crisis when many popular streamers were hit with copyright claims and DMCA (Digital Millennium Copyright Act) takedown notices.

This is why if you’re looking to become a streamer, it’s a good idea to use licensed, royalty-free music for Twitch streams from Artlist. You can proactively prevent anything like this from happening to you, and rest easy that your archive of Twitch streams won’t be deleted.

Regardless of this latest mess, the Twitch creator community has expanded beyond gamers, with ‘Just Chatting’ becoming one of the most popular streaming categories on the site. ‘Just Chatting’ is an eclectic group of streamers who do just that—chat—as well as livestream their daily activity. Beyond chatting, there are also vibrant music and live stream comedy communities on Twitch. And if someone wants to live stream dance performances, plays, baking classes, or arts and crafting, then it’s entirely possible to do just that.

Indeed, if the content fits the live-stream format well, it will find an audience. That’s why musicians and comedians have also turned to the Amazon-owned platform. All these types of creators can monetize their creations.

Like many social media platforms, Twitch is ultimately a medium for cultivating an audience that is active and engaged. In this case, the social medium is livestreaming.

When a gamer, a musician or some other type of creator sets up a Twitch feed, they are creating a channel for their live content. Somewhat like YouTube, when an audience tunes into a Twitch creator’s channel, they see a screen with whatever type of content is being offered. So, if the Twitch creator is a musician, their live content will be visible to whatever audience members are tuning in.

As noted above, Twitch audiences can respond in real-time through comments and emotes. And for anyone who wants to monetize their livestream content, creators can create various types of subscriptions (more on this below). And, again, other creators can monetize their emotes.

Becoming a Twitch streamer is similar to becoming a YouTuber: you need the right gear. The good news is that you can obtain much of this gear on a budget.

First, streamers will need a computer or, at the very least, a smartphone. Gamers who livestream on Twitch typically use powerful gaming laptops and desktops, but musicians and other streamers really don’t need a computer packed with the best specifications. If a tight budget is a necessity, there are some good-quality PC laptops and desktop options, and aspiring Twitch streamers can always look for refurbished Macs at reasonable prices. Not interested in going the computer route, use a smartphone—just make sure it can handle live streaming.

Next, invest in some decent audio-video hardware. Start with a quality webcam that will deliver a crisp and clean image to viewers. A nice microphone is also a smart idea for any streamer since bad audio, especially on broadcasts, is a big distraction for viewers.

Setting Up a Twitch Stream

If you are already thinking of becoming a Twitch creator, you probably already have an idea of what you want to stream. In setting up a Twitch account, musicians and other creators essentially build a hub for their live streaming community. To make sure their personality and brand stand out, creators can customize their stream with design on the Channel Page. 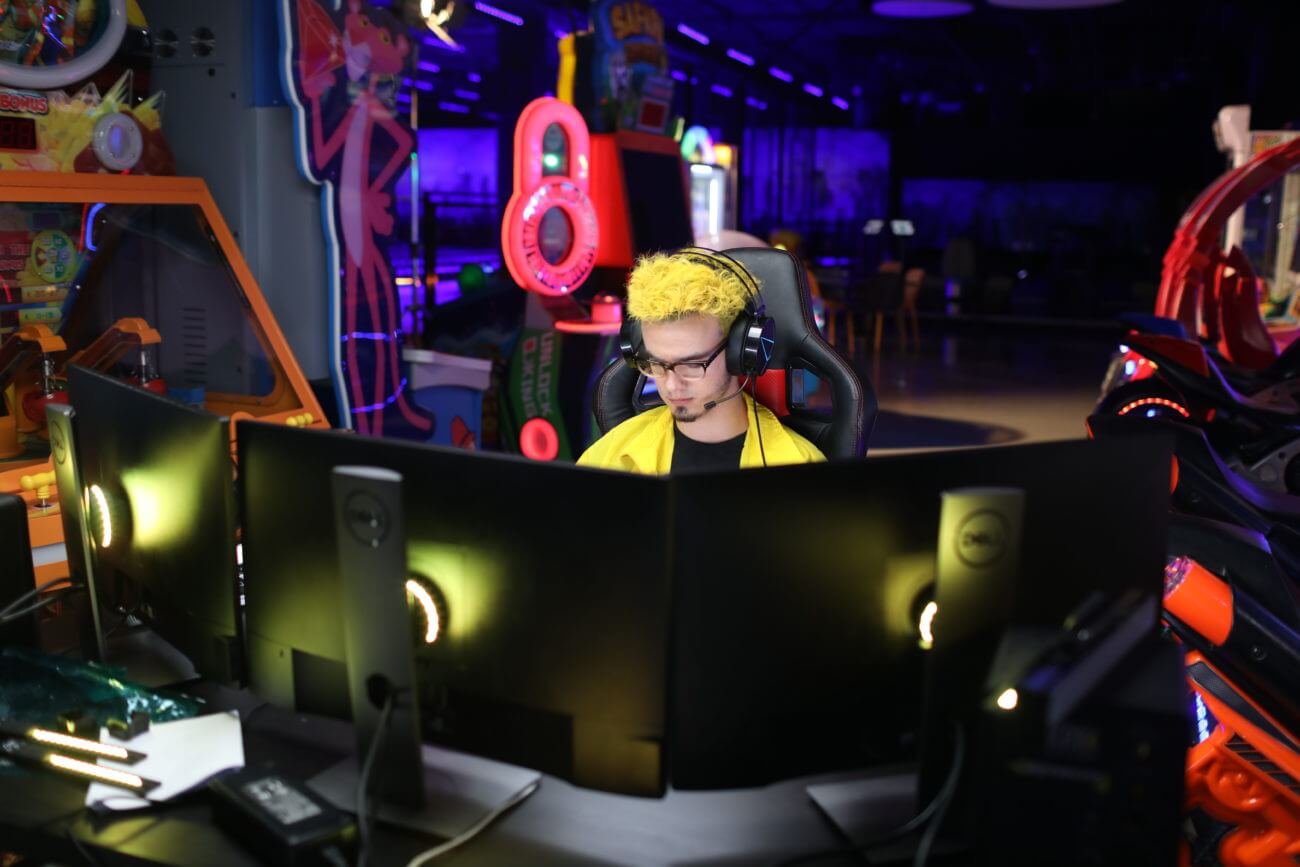 To start, creators should fill out their Profile Settings. Like any other social media, this includes a description of the channel, profile picture, profile banner, bio, username, and a display name. On the Channel Page, creators can set a cover image, which is a banner that is seen by your audience when tuning in for a live stream. A Channel Info Bar allows Twitch creators to give viewers information, like the streaming schedule, archived videos, and a chat room.

Twitch creators can also customize their twitch stream with Panels, which are graphics that organize information, both for the creators themselves and their audiences.

Outside of a Twitch stream’s design, creators can also have specific Moderation settings to help control online harassment and trolling. Other behind-the-scenes Account Settings allow creators to set up notifications, security and privacy features and other customizable filters.

Other Channel Page settings can be seen in more detail here.

There are a couple of different ways to make money as a Twitch creator. Each has its pros and cons and requires invitations from Twitch to get there.

In the first, a Twitch streamer is invited to become an “Affiliate.” As Twitch notes, “Qualified streamers will be invited via email, Notification, and an announcement in their dashboard.”

To qualify, a creator has to reach the following Twitch Affiliate requirements: at least 50 followers; at least 500 total minutes broadcast; 7 unique broadcast days; and an average of 3 or more concurrent viewers. When a streamer becomes an affiliate, they immediately gain access to subscribers through fees of $4.99, $9.99, $24.99, and the Twitch Prime free subscription. Affiliates can also earn “Bits,” which Twitch describes as: “A virtual good you can buy on Twitch that gives you the power to encourage and show support for streamers, get attention in chat through animated emoticons, get recognition through badges, leaderboards, and acknowledgment from the streamer, and even unlock loot during special esports events like Overwatch…”

The upside to being an Affiliate is that it doesn’t take as much audience-building effort as being a Twitch Partner. The downside is that the Affiliate program still requires quite a bit of dedication to build that audience, and Affiliates aren’t qualified to make money on channel advertisements.

Those Twitch streamers who have built a really sizable audience can make the jump from Affiliate to Partner. As part of the Twitch Partnership Program, Partners can offer audiences the same subscription tiers and can make money off of Twitch advertisements.

“Partners earn a share of the revenue generated from any ads played on their channel,” Twitch notes. “Partners can determine the length and frequency of mid-roll advertisements through their dashboard.”

Streamers apply to be either Twitch Affiliates or Partners. While it’s not necessary for those applying for a partnership to have been an Affiliate, Twitch recommends it. It’s also worth noting that Twitch streams can become partners without being an Affiliate if they have large audiences with lots of organic views on platforms like YouTube and Twitter.

In the end, becoming either a Twitch Affiliate or Partner will depend on how much time and effort they want to put into these goals. While it will be attractive to some creators, it may be a bit too much work for others.

Remember, becoming a Twitch streamer is a commitment to creating quality content and, ultimately, building a good, enthusiastic and engaged audience. This is true even if you don’t have plans of monetizing content as an Affiliate or Partner.

To create an attractive Twitch music stream that users will want to tune into, for example, streamers will have to do several things: build an eye-catching channel appearance; create quality live content and engage their audience by chatting with them. And if this all goes well and streamers want to monetize their content, that option is always available to them.

Just keep this in mind: create quality content first, then you can think about making money off of your Twitch stream.

Best Streaming Webcams for Twitch and Other Platforms

How to Build Your Twitch Streaming Setup