Want that cinematic look all with the ease of use a smartphone provides? Consider adding accessories to your Apple or Android device to enhance your filmmaking quality. It worked for director Sean Baker when he made an entire narrative, Tangerine, on an iPhone 5S and won a bunch of awards for his innovation back in 2015. We recently gave you tips on how to make the most out of your smartphone for making videos; read on to learn about the best smartphone accessories for video creators today.

The latest smartphone cameras generally have OIS, or optical image stabilization, an inbuilt gyroscope, but you can improve it by using a gimbal. Though you might want that handheld look, you don’t want a rolling shutter (also called jello). A three-axis motorized gimbal has the ability to keep the camera level as you move. The low-priced DJI Osmo Mobile 3 is a popular and easy-to-use gimbal.

If you want to pay less, get a simple smartphone grip. You can also mount a lens, light or microphone to your grip. Because the grip has no motor, it’s cheaper, more lightweight and doesn’t require charging.

The Sevenoak Handheld Smart Grip also has a cold shoe mount for a light, microphone or transmitter. The grip also attaches to tripods and monopods and includes an integrated bubble level and built-in wrist strap.

If you buy no other accessory, get various smartphone attachable lenses, including an anamorphic lens. The added value of anamorphic lenses is that audiences are used to seeing wide-format footage on the big screen, so they register it as more cinematic looking. 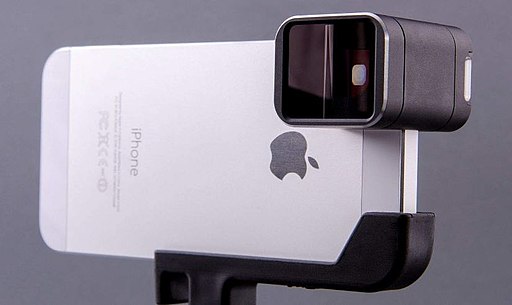 So what is anamorphic exactly, and why employ it? Anamorphic lenses deliver an extremely wide field of view without distorting faces, even within extreme closeups. This allows for smooth, shallow depth-of-field in the middle of the frame with a buttery falloff on the edges.

Filmmakers sometimes cheat to achieve the anamorphic look by inserting top and bottom black bars in post-production. The better option is to use anamorphic lenses, which can be quite expensive for cinema and DSLR cameras. However, smartphone anamorphic lenses are much more affordable, so they should be a crucial part of your smartphone accessory kit.

Anamorphic lenses also have that notorious lens flare. Moment has made tons of highly useful smartphone camera accessories, including the Moment Anamorphic Lens adds natural flares because it bends the light horizontally.

Include in your smartphone kit as many “pro” lenses as you can—after all, they’re relatively inexpensive compared to cine camera lenses.

The Olloclip set of lenses comes in a filmer’s kit and includes Fisheye, Super-Wide, Macro 15x, Telephoto 2X and Ultra-Wide Lenses. The more lenses you have, the more varied your shots can be, giving your project a more filmic and less digital feel.

The simple and easy way to capture higher quality sound than your camera phone allows is with a directional mic like the RØDE Microphones' VideoMic Me-L. It connects to the Lightning port on your iPhone and has a headphone jack on the rear for monitoring sound.

If you need clip-on lavaliers for dialogue or interviews, you’ll want a wireless microphone system with a transmitter. Travel filmmaker Brandon Li, one of our judges on the Edit Challenge competition, always travels light for run-and-gun shooting. As travel gear, he recommends the Comica Digital Wireless Microphone System for its use of ease and affordability. These mics have a small footprint and can easily be dropped in a pocket. The Dual Transmitters are triggered by one receiver for less fuss.

Want to transmit your image to another monitor in real-time? The INKEE Benbox Video Transmitter can send your footage to three devices so your crew or client can watch your smartphone in real-time.

You’ll likely have a mix of moving and static shots, so when you’re not using a gimbal, stabilize your smartphone on a tripod. You can attach any smartphone to a regular video tripod with the proper mount, such as the inexpensive Xuma Smartphone Mount, which has three standard tripod threaded holes.

If you need a lightweight and multifunction system, the Magnus MiniFlex Tripod goes from grip to tripod to bendable legs for attaching nearly any object. The flexible rubber legs adjust to any height up to 10.5" and can level and steady your smartphone, including on uneven surfaces.

To rig nearly all your accessories using one piece of gear, consider the Dreamgrip Modular Rig Kit. It’s basically an all-in-one cage with attachments (albeit ranging in quality) and a good buy to get started. The kit comes with many of the smartphone camera accessories you need, including a directional microphone, LED lights, barn doors, ND filters, a tripod mount connector, and more. You can also mount another smartphone and use it as a front monitor.

Lighting makes all the difference in achieving smooth, noiseless shots and also getting your subject in focus. And if you’re shooting in low light, don’t rely on your smartphone for a quality image. Smartphones perform notoriously poor in low-light, so pop on an LED light or two to illuminate your subject or scene. Godox LED Smartphone Light has high and adjustable brightness modes and has a battery rechargeable via USB. It comes with a diffusion cover and L-shaped brackets for mounting.

Want more control of your smartphone camera? Take a page out of Steven Soderbergh’s playbook and use Filmic Pro. He has shot multiple films on smartphones using Filmic Pro. This software takes your camera out of auto mode and into manual control, allowing you to control ISO, exposure, focus and white balance all within the app. Filmic Pro even allows the user to program an automatic focus pull from point A to point B.

Since the app FiLMIC Pro allows you to lock the shutter speed, you’ll want to add some ND (neutral density) filters to your collection. The Moment Variable ND Filter allows for two to five stops or six to nine stops, depending on which filter you choose.

Finally, to add all the bells and whistles of a pro film, consider using pro editing software such as Adobe Premiere, DaVinci Resolve or Final Cut Pro X. These pro apps can handle your 4K footage with ease. While it may be tempting to edit directly on your phone, it’s better to edit on a larger monitor and have all the video and audio tools possible at your disposal.

Directors of all leagues have jumped onboard the smartphone filmmaking train and, with the right accessories, have pushed the medium to new heights. You can, too, by adding these tools to your smartphone kit.