How to Master the Handheld Camera

Handheld footage can give viewers a greater sense of reality when done right or can be distracting and dizzying when done wrong.
Learn which cameras and lenses are best suited for shooting handheld
You can use stabilizers and mounts to create smooth handheld footage

Going handheld is simultaneously liberating and risky for many filmmakers and videographers. Handheld can infuse filmed content with intimacy and casualness, giving the viewer a greater sense of reality. However, even minimal movements can be magnified by the lens. Not using certain techniques when shooting with a handheld camera can result in shaky videos, ranging from the slightly distracting to the unprofessional.

Thankfully, Filmmakers and videographers have over a century of varied handheld tricks, techniques and technology to fall back on in guaranteeing a quality moving image. It’s really a matter of studying the filmmaking and video production techniques, demoing handheld camera accessories and finding what works best cinematographically and financially. Not everyone can afford a Hollywood-caliber handheld setup. But the great thing about making films and videos in the 21st century, whether one is a vlogger, a filmmaker or a documentarian, is that the tools and knowledge are now more accessible than ever.

Below, we take a look at some of the tips, tricks and gear available to filmmakers. Some require no accessories, while others will require some investment. Whatever one’s reasons for ditching the tripod, these methods work well regardless of budget.

In handheld, camera and lens matter

Before we get into techniques and accessories, a word about cameras; there’s a range of video cameras that offer filmmakers and videographers a cinema-quality motion picture image. The most important investment will dictate the feel of the handheld. 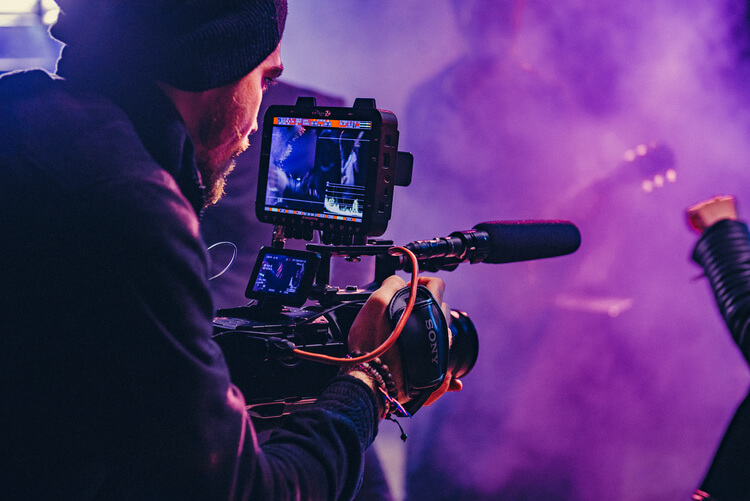 A small, compact camera like a Blackmagic Pocket Cinema Camera will have a different feel than, say, a Canon or Nikon DSLR, which will, of course, feel much different than a professional (yet still relatively affordable compared to high-end systems) cinema camera by the aforementioned brands, or those by Panasonic, Sony, Red and Z Cam.

A heavier cinema camera, for instance, can be perched atop the camera operator’s shoulder, creating a more stable handheld movement. And for some, the added weight will make the handheld footage more fluid. But for others, a smaller and lighter camera, like the Micro Cinema Camera, or any other budget DSLR, might yield better handheld static and tracking shots.

So, before purchasing a camera, rent or borrow a few different camera bodies and camera lenses and see how they perform handheld. Find the best camera for your filmmaking needs at the right price.

Before investing in things like stabilizers, aspiring cinematographers or camera operators should understand that the craft requires equal parts grace, athleticism, endurance and stillness that would be familiar to a meditation practitioner. While a camera operator uses technology to frame a series of images, they are doing so as if it were a dance. Think of yourself as a choreographer or even a martial artist wielding weapons — except your weapon is meant for capturing light.

Firstly, use two hands and bring them toward your chest. They will create an instantly smoother handheld moving image. A helpful yet underestimated tool for shooting handheld is the strap that comes with a camera. With the strap, the neck becomes an additional point of balance between the camera operator’s hands. Another helpful tip is to practice regulating one’s breathing whilst operating the camera. Do this for both static and moving shots. Try to get to a state where your breathing doesn’t affect the camera movement; or, at the very least, kept to a minimum.

Stance is another important factor. For static shots, find a comfortable one that can be held for extended periods of time. This is where endurance becomes important because the camera operator holds the camera and the stance for perhaps minutes on end. 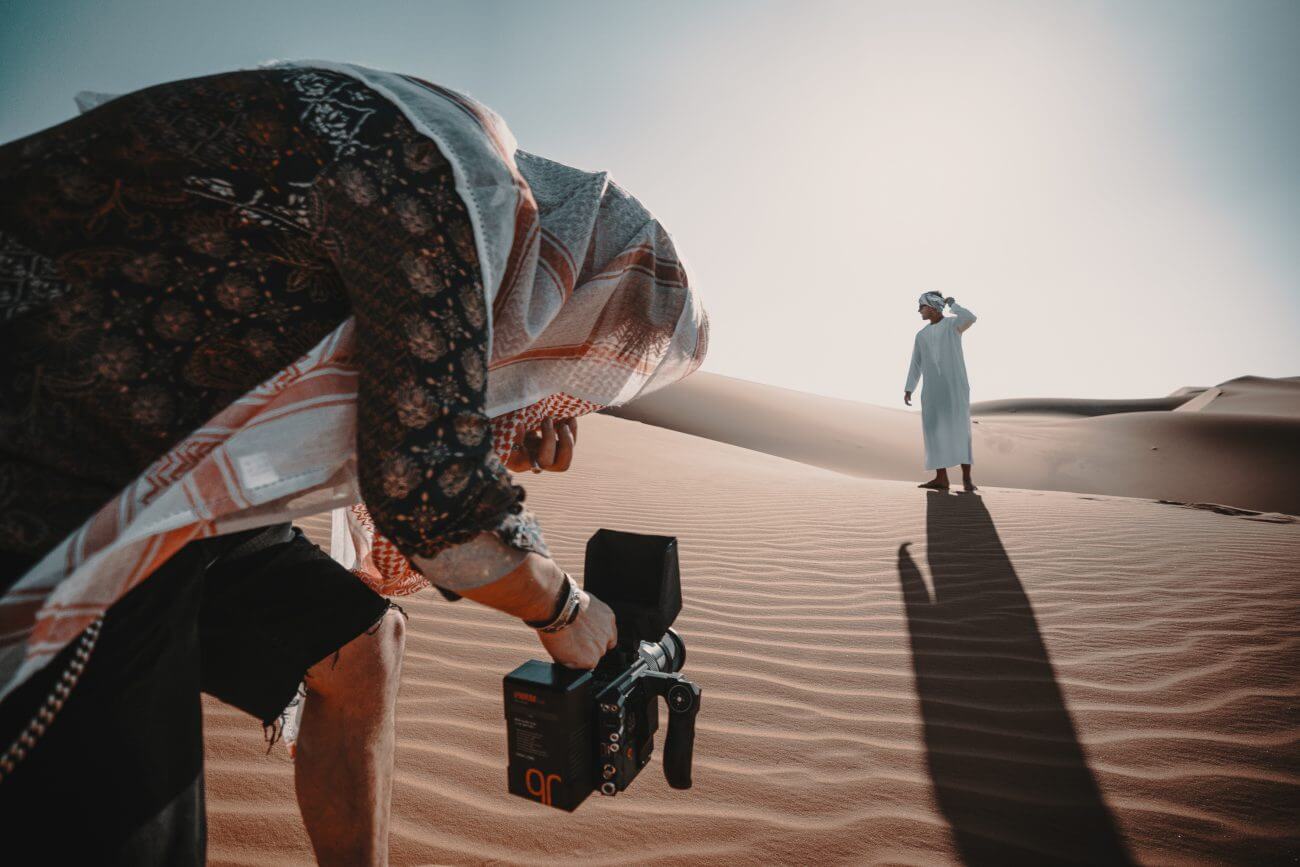 Now, if one must move, the stance becomes irrelevant. This is where practice becomes incredibly important. Practice movements like panning, tilting, and tracking actors or even empty spaces, using long strides and a steady core instead of arms extended until steadiness achieves that yields a quality moving image. An upside to panning, tilting, and tracking is that these movements can often camouflage shaky handheld camera work. Below, the camera operator executes short and quick pan and tilt movements, enhancing the shot’s emotional impact.

A few things to avoid. Figure out settings before rolling, as changing them while filming will lead to shakiness. And, unless you’re confident and well-practiced, avoid zooming or changing focus from one object to another. As noted above, it tends to exaggerate shakes. But this clip below proves that it is possible to shoot handheld and change focus, all with a telephoto lens while maintaining a smooth image.

If the stance and breathing aren’t quite helping in the journey of mastering a handheld camera, an operator can brace their body against a wall, a post, or anything that provides solid support and balance. This will prove particularly useful for heavier camera rigs but will become irrelevant if the scene calls for a tracking shot.

Another possibility for steady handheld tracking shots is to use an assistant. Whether it’s an actual camera assistant or set production assistant (PA), another person can prove useful in helping achieve fluid handheld (or static) tracking shots, as they can help guide the movement; or, on the other hand, serve as support for a static shot.

Your handheld shot depends on more than having the best camera for filmmaking. If the handheld camerawork doesn’t pass the eye test, don’t be afraid to turn to gimbals or stabilizers. Like any camera accessory product, there are budget options for motorized and non-motorized stabilizers.

In the non-motorized category, there are great options for shoulder and wheel mounts. A shoulder mount gives camera operators 2 handles to grip and a pad that rests on the shoulder. On the other hand, a wheel mount is essentially a wheel on which you can mount a DSLR or a heavier camera in the middle. This eliminates the need for touching the camera, helping you be steadier. Some stabilizers have counterweights that use the pull of gravity to help the operator craft a fluid handheld shot. Motorized stabilizers, on the other hand, feature electronics that do the steadying work for users.

Stabilizers will help correct any movements that get exaggerated on film or video. And, look at this way: ultimately, a filmmaker or videographer may well want to use a stabilizer for more fluid handheld shooting. There is no shame in it.

Hope you found these tips for mastering the handheld camera useful. For great examples of handheld shots, go to our royalty-free stock footage platform, Artgrid, and get inspired. Join us for other tips and tricks to improve your filmmaking skills. As always, stay creative!

An Introduction to the Different Types of Shot Sizes

The Beginner’s Guide to the Steadicam

How to Step Up Your Audio Monitoring Game