A shot list is a document that organizes the shots in your film into an actionable production plan
Making a shot list will make life easier for your production heads and give you peace of mind on set and in post-production
Whatever software you use for your shot list, make sure you have the essential elements of shot type, scene number, audio, and description

If you’re planning your next film shoot, you’ll want to ensure you have every available tool to make it go as seamlessly as possible. Assuming you have your script breakdown and your digital storyboard, it’s now time to communicate your vision to the DP and 1st AD. This is where your shot list comes in. In this article, we’re going to discuss what a film shot list is, why it’s vital for your production and the different elements necessary to make it as clear and effective as possible.

Whether you’re writing a short film, a feature film, a television show, and even if you’re writing a YouTube video script, a shot list is a must-have. Simply put, it’s a document that orders the shots in your film in such a way as to give you continuity in the shooting process. Have you ever watched a film and thought to yourself, “Wow, the story is so seamless and tight. Did they shoot the entire movie in order?” While this is a big kudos to the filmmakers, it can also be a testament to a shot list that kept the production on target and left nothing out of the script.

A good shotlist is like a road map between the creative aspect of the filmmaking process and the production. It forces the creatives to make decisions because it actually shows how some shots will be difficult to pull off. But, on the other hand, it can also boost creativity and help your storytelling, like when a director manages to combine shots or see some as repetitive or unnecessary. Either way, the visual and concrete representation of the shooting schedule is a further step forward in turning your concept into a reality on screen.

3 reasons why you need a shot list for your production 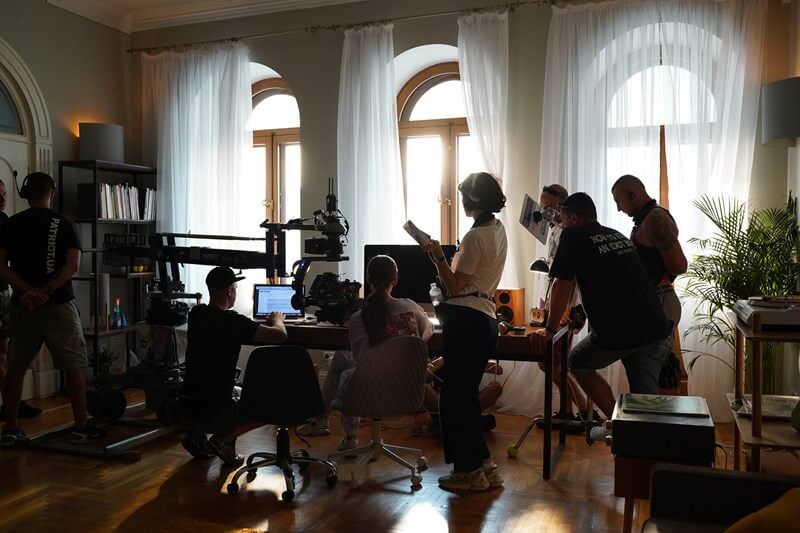 A shot list is a must-have. Don’t let anyone tell you otherwise. Doing a shoot without one is like driving to a destination without a map. Even if you think you know where you’re going, keeping track of how your shots align in making your film is too stressful and, frankly, unnecessary.

1. To clarify your vision

Having a shotlist accomplishes several things. First, it makes your vision clear to the crew members in a concrete form. It tells your DP what shots you plan on using and gives them adequate notice to make plans. It also lets your 1st AD get an idea of the shooting schedule. This will allow them to adjust your shooting day and give you realistic feedback about how much is possible to cram into your shooting schedule.

2. To improve communication between departments

This shot list is also what makes real dialogue between these departments possible. By putting your list in sequential form, you’re able to see the feasibility of certain shots compared to others. Perhaps you must compromise making a giant panning shot to get the other static ones in each scene. Maybe you’re able to combine those static shots into a single take. The fact is that you won’t have that information until you’re forced to be specific and exact with your list of shots.

3. To make you feel prepared

This specificity is what may be the biggest payoff of doing a shotlist. It will hone in your intention going into the shooting day and give you confidence that your choices are solid. Perhaps you change your mind on the day of, but it will at least be a pivot instead of coming up with something out of thin air. Having a shot list gives you the peace of mind that you have your bases covered, and the security in case you decide to be spontaneous and change things on the day of. It’s for this that having the right shot list template is essential.

Making a shotlist may seem like a chore if you’re the type of creative that wants spontaneity and freshness. However, even if you’re that type of artist, after learning how to make a shot list, you will find that doing the detailed work actually helps you come up with new ideas. If anything, it will work out another part of your brain by delving into spreadsheets and organization! 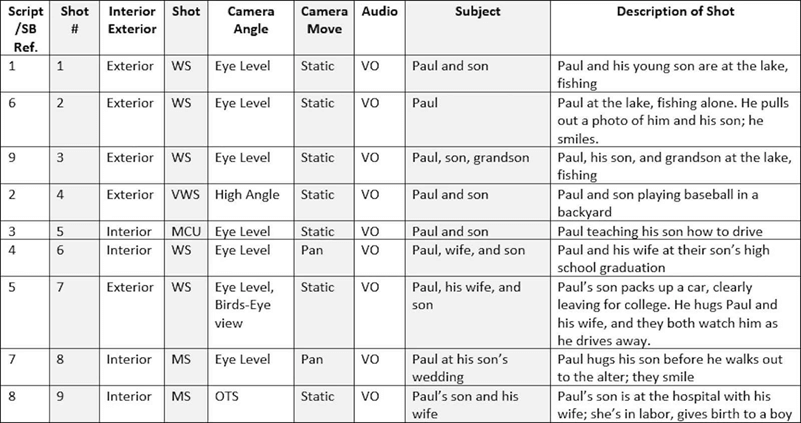 Start by pulling up either a shot list software or a spreadsheet document (either Excel or Google Sheets). The 3 main software are Studiobinder, Shot List, and Shot Lister. The plus side of using software is the clean design, customizability and good collaboration tools. If you decide to go cheaper, no problem as long as you have skills making your spreadsheet customizable. If not, you may want to spend on some upgraded software. Like any video production project management, quality comes with investment. This will ensure you have a good shot list template at your disposal.

Start by having a good handle on your script breakdown template and what locations you’ll be shooting in. This will give you a sense of the scene numbers and scheduled days in specific locations. Once you have that, you will write down your scene numbers on the farther left side of the shot list (meaning the order of shots in the shooting schedule) and where those scenes correlate in the script. Remember, a film is shot out of order, which affords you a chance at continuity during the shooting process.

Afterwards, you go into specifics of locations, signifying whether it’s an interior or exterior shot. This communicates to your gaffers how it should be lit and set up. Next, you’ll list the shot type and size. For instance, maybe it’s a wide shot with a camera angle looking down. Or, perhaps it’s a medium close-up at eye level. This is vital information for the DP and 1st AD to get the camera in its proper place. Just as important, though, is if there is any movement to the camera itself. Whether it’s static, panning, tracking, or handheld will determine a lot in terms of setup and choreography between cast and crew.

Next will be a section for audio. Is it a voice-over, on-set sound, or simply music? This will help determine whether the sound department is needed and how the set should be arranged.

Lastly, though, are sections regarding the subjects you shoot (the characters’ names) and a brief description of what happens. While this may seem cumbersome at first, it will ensure that your 1st AD can come to you after shooting wraps to see if anything was missed. Remember, if you’re wondering how to make a shot list, you can answer that only by taking a stab at the real thing.

Types of shots and abbreviations

Having a film shot list is an essential part of your filmmaking tool kit. It will save you headaches by making sure you have everything you need on the day of the shoot so that you don’t have shots missing in post-production. It will allow communication and compromise between departments and force you as the director to be exact with your intention. After getting familiar with the organization and abbreviations, putting effort into your film shot list template will pay off enormously. Until next time, stay creative!

The Beginner’s Guide to Audio Dubbing