How to Excel at Script Breakdown (Download Free Template)

To break down the script, you need to read it from a producer’s point of view to understands all the different elements that make up each scene
Break up the script into eighths, measure the scenes accordingly and color-code the different elements
Download a free script breakdown template to simplify the process and get a big-picture view of everything your production needs

If you’re reading this page, that means your script is finished and greenlit for production. Congratulations! Whether you’re writing a short film or making your first feature, this means that only a few steps lie between your most recent draft and on-set production. You’re that much closer to turning what’s on the page into reality.

This means, though, that you have to look at your script through a producer’s lens. How do you translate the story into directions for each department head to know how to service the story? The way to do this is to initiate your script breakdown process in an organized and reliable manner.

To make things easier for you, we’ve prepared a script breakdown template, which you can download for free to use in your next productions.

How to breakdown a script

By script breakdown, we mean that you’re not just taking the script apart by the scenes but also by the different elements necessary to make each scene come together. You’re going to have to comb through the script and pull-out concrete directions for the different departments (i.e., actors, makeup, wardrobe, sound, etc.).

The first step, as obvious as it may seem, would be to read the script many times over so that you have a key grasp on what is needed for production. Understanding is the basis for clarity, and this will help you get even more organized once you begin the breakdown process. 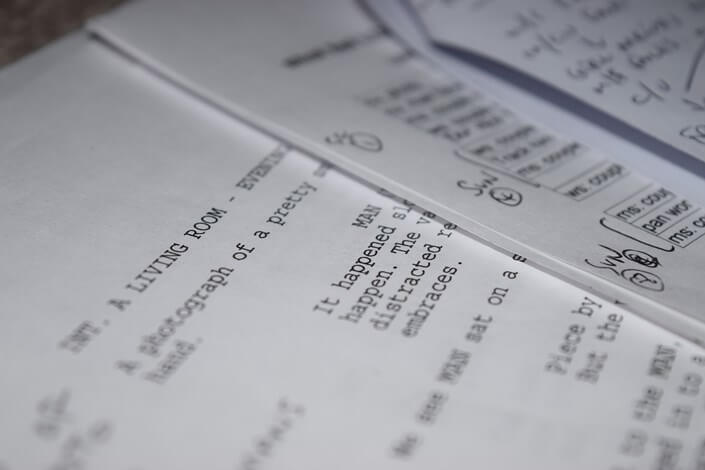 Image by Oli Lynch from Pixabay

Supposing you have good script breakdown software (Movie Magic or Celtx are popular), upload your script file into the software to begin working. It is possible to do this by hand with different script breakdown colors using highlighters, but that is a very time-consuming route. Better to invest in a reliable software that will deliver results sooner.

Next, you’ll want to determine the length of each scene in your script by dividing each page by “eighths”. These are literally lines that you can either draw on the page or those that can be done by a script breakdown software (check out the script breakdown template for reference).

While the lines themselves may seem odd, they help enormously on the production end when determining how long a scene is. Although it may look like a scene is a page and a half, you may realize the scene is simply a “page and two-eighths” after drawing your lines. This will allow your producer and 1st AD to plan accordingly for the shoot.

The next step is to organize each scene in order and start working your way through. Take it one scene at a time, and bring out your fine-tooth comb to start probing for elements.

Elements for a script breakdown

By “elements,” we mean the different departments indicated by the writing in the script. For instance, you may have a scene with the following description:

SCOTT (40) walks into the barbershop holding a motorcycle helmet and sees a crowd of patrons in the back. Suddenly, he hears a BANG in the back of the shop.

Like when creating a shooting script, you should re-read that scene and notice the different aspects of the scene that are in bold. Scott is an actor. The barbershop is a location. The crowd of patrons is a group of background actors. The bang is a sound effect. These details are significant in that they indicate which responsibilities will have to be delegated to different departments.

To better organize this, your software should have script breakdown colors assigned for different departments. According to the industry’s color-coding scheme, the cast is red, props are purple, extras are yellow, and sounds are brown (but you can make your own color code, of course). So, your lines of description may look like this:

SCOTT (40) walks into a barbershop holding a motorcycle helmet and sees a crowd of patrons in the back. Suddenly, he hears a BANG in the back of the shop.

Looking at your script this way allows you to notify the different departments of what is needed and your producer to begin assessing the logistics going into the shooting of each scene. Maybe you realize one page requires extensive staging. Perhaps you have to cut things due to complexity or inability to get the scene within budget. Being concrete with what the scene needs can be limiting and force you to be creative to find solutions.

It will also provide clarity to the departments as to what you need. There is a bang in the back of the barbershop, but can that be achieved through effects or do you need a prop? Are there one or two patrons, or many more? Does the barbershop need a specific aesthetic, or does something bare-bones fit more? Separating what is on the page to the heads of different departments allows them to ask the questions and get this clarity from the director herself. This takes you one step closer to making the production a reality.

After combing through each scene, pull a report from your script breakdown software. You should have each scene showing which elements are called for, broken down by the different color-coded columns (again, check out the script breakdown template for reference). This prepares you for production meetings with different department heads where you can be specific about what is needed for that day of the shoot.

The other benefit is the organization on the production end. You can take your reports further and break down the script into a spreadsheet to make your shooting schedule. Each scene is given a number and assigned necessities from each department. People are armed with clarity about what is expected on the day of, and the director can address creative concerns with peace of mind.

While learning how to break down a script can be tedious, it is vital for organization and exactness. While not as exciting as learning how to create a storyboard, it is an opportunity to be creative against constraints and learn how to be exact in your vision. By utilizing the color system, you separate the different responsibilities and departments meant to bring the project together. By the same token, you also streamline the process of making your shooting schedule.

Make your life easier by downloading the free script-breakdown template:

By learning to love this process as much as the writing, you can view it as an extension of creativity that you’ll take into doing your best work.

Streamy Awards 2021: A Review of the Creator of the Year & Other Nominees