How to Create a Hollywood Set Using Miniatures

If you’re a creator who likes to scroll your Instagram feed, you may have come across the extraordinary work of Sebastian Jern, a Swedish filmmaker and visual artist who builds stunning sets out of miniatures. Having been impressed with his work, we recruited him for our Holiday season campaign.

Titled, ‘Hollywood on a Table,’ the project involved Sebastian building 5 different miniature sets inspired by the iconic titles Blade Runner, Avatar, Game of Thrones and 2001: A Space Odyssey and one set inspired by classic Hollywood westerns.

We sat down with Sebastian as he gave us a behind-the-scenes look at how to create high production value on a Hollywood scale using only miniatures and a little bit of post-production magic. He also used assets from the Creators Pack, which we are giving away as part of our Holiday campaign and includes film grains, film mattes, SFX, transitions, textures and more.

Artlist: Can you tell us a bit about yourself?

AL: How did you get started with miniatures, and do you consider yourself a visual artist or a filmmaker?

SJ: I consider myself a filmmaker first and an artist second. I’ve been creating miniatures for only 8 months, so I’m relatively new and still learning a lot. I actually got into the world of miniatures thanks to 2 pieces of gear. One is the drone, and the other is the Laowa Probe lens, and I think both products are somewhat similar. I often use drones to give a unique perspective and create a cool parallax effect by going through terrain and between buildings, and I do the same using the Probe lens, but with miniatures instead of life-size sets. 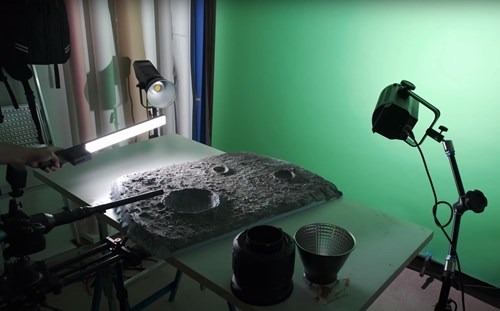 The Probe lense in action

AL: What’s your favorite part of the process?

SJ: I would say that my favorite part is when it’s finished because even though I can usually feel if my plan and vision are going in the right direction, it’s the first time I know that my vision has come alive the way I wanted. Sometimes I find that some technical aspects of my project require improvements, but it’s all part of the learning experience.

AL: You seem to put a lot of emphasis on sharing your work process. What are your thoughts about being an artist on social media?

SJ: I’ve only been seriously active on Instagram for about 8 months now, and my favorite part is inspiring other filmmakers. I really like to teach and I share all my productions with behind-the-scenes material so other people can get inspired and try to make something similar.

I want to work with international clients, and social media is a great tool from a business point of view, to gain exposure and make connections with brands.

AL: Does your work require a unique set of skills, or even gear, to create such sets and make them come alive?

SJ: I’m operating in the middle of a triangle formed by 3 fields – filmmaking, visual arts and architecture, scaling and dioramas. I’m looking to improve in all these areas and create a profession that doesn’t exist today.

I think that If you have a passion for these fields, you could make it happen. To start creating the way I do, I recommend that you learn architecture, visual arts and making dioramas besides filmmaking.

As for gear, if you want to go between houses or through terrains, you need to have a small form factor lens like the Laowa lens. In any case, I would say that the most critical part is to understand lighting techniques. Sometimes when I shoot, I use 7 or 8 different light sources to create the right shadows and highlights.

With good lighting, composition and miniature building, you can achieve fantastic shorts, even with your mobile phone.

AL: Where do you take your inspiration from?

SJ: I get inspiration from many places, but the best ideas usually come to me either before I go to bed or when I’m in the shower. Then I stop showering, run out and write down my ideas on my mobile phone.

My biggest source of inspiration comes from YouTube. I spend a lot of time looking for behind-the-scenes videos of big Hollywood sets, like Avatar and Interstellar, especially ones that show the thought process of the director, visual engineers and the DP.

AL: Who are some of your favorite filmmakers and artists?

SJ: I really love Christopher Nolan and his direction style, especially on Interstellar, which is one of my favorite films of all time.

The second is James Cameron, a true genius in the way he uses technology. I’m talking mainly about Avatar‘s visual engineering. I’m really looking forward to the sequel. 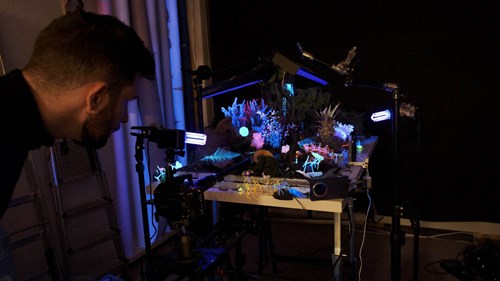 And my biggest idol of them all, who I watched performing his music live, is Hans Zimmer. His film compositions are brilliant. He’s one of a kind.

AL: What was your initial reaction when we approached you about the concept of creating ‘Hollywood on a Table’ with 5 different sets?

SJ: A couple of months ago, I was actually thinking about recreating sets from movies because the thought of a guy from a small town in Sweden doing this from his home is fascinating to me.

I have been using Artlist and Artgrid for quite some time for the music and footage quality, so I was excited. My question coming into the ‘Hollywood on a Table’ project was, ‘I have one month to create, not 1, but 5 sets inspired by huge movies, and I’m doing this by myself. Is this possible?’

I love challenges. I think that when you challenge yourself out of your comfort zone, you learn the most in the shortest period of time. That’s why my second thought was, ‘Ok, let’s do it!’

AL: What’s your creative process like? Do you use references?

SJ: I think the analogy that would best explain my creative process is how a producer creates a song, deciding what drums, guitar and loops to use and bringing all the elements together to create his music.

My creative process usually starts with an idea. Then I look on Artgrid for the best visual representation of that idea and build a map of how it should look like. I plan the scale, what materials I should use, the diorama’s size and stuff like that. After that comes the building process, and then we move to the lighting setup, camera angle and composition. Then comes the filming, which is actually the fastest part of the creative process.

If I’m using a green screen, I pick the preferred backdrop and then layer between 5 and 10 layers, depending on the set, adding different elements to make it look real. You get the best VFX results when the CGI and practical effects work together.

AL: Can you take us through your creative process in this project?

SJ: The first step in creating these 5 sets included a lot of research into how the original sets were made. I looked for behind-the-scenes materials that would help me get a general sense of how to create miniature versions of those sets.

Many of these sets were made with CGI, so I had to consider the timeframe and the miniature format’s feasibility for each scene.

On the Blade Runner-inspired set. I really enjoyed crafting all the parts – the hand, the feet, the face – to try to get the same colors and same vibe as the original cyberpunk classic. 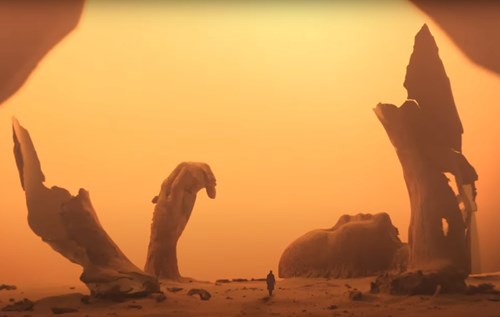 The Avatar set was probably the most complex I’ve ever created, especially the lighting part. I also used 4 different LED lights to emphasize the silhouettes and the forest as a whole and 4 different UV black lights to accentuate the neon colors and neon plants and make them glow. On top of all that, I had to work around a pool of water. I used the overlay assets on the Artlist & Artgrid Creator’s Pack to replicate fireflies over the pond.

I also went out to the Swedish wilderness to find mushrooms, a fun trip, hahaha. Not sure if they were toxic or not, but I didn’t eat them and I’m still here. I came across a runner while I was in the forest, and he probably thought I was crazy because I was staring at those mushrooms so freaking long. I really needed to have perfect mushrooms for my set.

For the wild west set, the idea was to create this iconic canyon cliff and use the right green screen and backdrop to “sell” the scene. The canyon is modeled after some shots on Artgrid that I really liked. To make the set look real, I used layers with clouds in the backdrop of the green screen, in the foreground and in other areas.

For the Game of Thrones wall, I used around 4,000 or 5,000 individual mat-knife cuts in the styrofoam to create this kind of harsh glacier feeling of a thick wall. Creating the foreground was fun; It really made the whole wall pop and gave depth to the image.

As for the moon, I knew from the beginning that I wanted to create it so that the light would reflect from below and create dramatic shadows. It makes the moon’s rocky surface pop.

AL: Where do you see yourself in 10 years? What is your goal as an artist?

SJ: My main goal, in 10 years, is to have a big studio because all my sets are sitting in my closet, but I have many other aspirations. For one, I want to learn more about visual art, filmmaking, architecture, dioramas and miniatures and bring all these fields to form one unique title. I also want to continue pairing CGI together with my practical skills to create cool VFX and tell epic stories in the future. Being a big fan of augmented reality, I want to learn more about this field as well.

Finally, I want to make mind-boggling commercials for big brands and I hope to grow my social media and gain more exposure for that.

AL: With new technologies like VR and AR becoming more common and the ability to create amazing footage becoming available to almost anyone, where do you see filmmaking in general in 10 years?

SJ: Even though in 2030, the iPhone 22 will probably have 16K 120 FPS, 16-bit raw footage capabilities, it’s ultimately just a tool. It doesn’t really mean that you can make art. It’s like a hammer for a construction worker. You still need to go through a creative process by yourself, which I think will be valued as much in the future as it is now.

I’m a huge tech nerd, so I’m very excited about how mobile phones would look, where VR and cameras will be and what the next revolutionizing tool will be like the drone was. I think it’s crucial to adapt and stay passionate. It’s going to be fun.

Acclaimed VFX Supervisor John FK Parenteau Talks About How He Got Started, Working with Spielberg & Gives Tips for the Edit Challenge

How to Create the Perfect Time Freeze Effect

Music Talk: How Wes Writer’s Collaboration With Artlist Led to His Streaming Success