Last week, YouTube announced that the YouTube dislike counter would be disappearing from all videos forever. It’s a big move
While the public-facing like to dislike ratio will be gone, creators will still be able to see their YouTube dislikes on the back end in YouTube Studio
The move has polarized both creators and views, with some coming out strongly against the update, while others have welcomed it with open arms

Relentless as ever, YouTube continues to chop and change, ever-evolving and progressing. In the past week, quite a stir was caused by the announcement that the YouTube dislike count is being removed. For good. Yes, really! YouTube dislikes will be gone forever. Well…almost. You as a creator will still be able to see them on the back end of things, but as far as the public-facing video goes, no more YouTube dislike count. Goodbye.

Unsurprisingly, this has caused huge debate among both YouTube video creators and viewers around the world. Some are all for it; others aren’t happy at all. So let’s take a look at this latest YouTube update in closer detail.

Not every social media platform has a dislike button, so why did YouTube? In the “early days” of YouTube (pre-2010), the site worked on a star-based rating system where viewers rated videos on a scale from 1 to 5 stars (1 being bad, 5 being great). However, over time, YouTube staff argued that 2, 3 and 4-star ratings weren’t being used anywhere near as often as 1 and 5. Consequently, it made sense to switch to the system we know today – a simple like to dislike ratio.

This YouTube update has stuck for the past 11 years and undoubtedly plays a role in helping the YouTube algorithm determine where videos rank on the site, including features such as YouTube recommended videos. If a video has high likes or dislikes, that’s going to be noticed.

Of course, this dislike button opened the door to “dislike mobs” – the process by which a large number of online trolls dislike a video en masse simply because they can or because they don’t like the content or message being promoted in the video. YouTube felt this first hand when they released their YouTube Rewind 2018 video. Within 7 days of uploading the video, it became the most disliked video in the history of YouTube. Yikes!

Maybe because they’re salty that their own video became the most disliked video in history?

Jokes aside, It’s not always the case that a large tech company will provide such clarity on their reasons for an interface change. Still, YouTube has made no bones about this one. Here’s what they had to say in their official announcement on their blog:

“Earlier this year, we experimented with the dislike button to see whether or not changes could help better protect our creators from harassment, and reduce dislike attacks — where people work to drive up the number of dislikes on a creator’s videos.

As part of this experiment, viewers could still see and use the dislike button. But because the count was not visible to them, we found that they were less likely to target a video’s dislike button to drive up the count. In short, our experiment data showed a reduction in dislike attacking behavior1. We also heard directly from smaller creators and those just getting started that they are unfairly targeted by this behavior — and our experiment confirmed that this does occur at a higher proportion on smaller channels.”

So, if you believe what YouTube says and take it at face value, this move is all about protecting creators from the “dislike mobs” – primarily those just starting a YouTube channel, but full-time YouTubers too.

But what does the reality of this mean for creators and viewers?

What it means for creators

Can YouTubers see who dislikes their videos? Yes. While the headlines may read “YouTube removing dislikes,” the reality is that they’re not quite gone forever.

If they would like to understand how their content is performing, creators will still be able to find their exact YouTube dislike count in YouTube Studio, along with other YouTube analytics. This strikes me as a little odd, considering that YouTube is pushing the argument that removing YouTube dislikes helps creators’ mental health. While the public-facing dislike button has gone and potentially saves some from an embarrassing or humiliating moment, the metrics are still accessible for the creator. It’s pretty much business as usual, I think.

What it means for viewers

This is where it’s a bit more interesting. The like to dislike ratio has always been a fantastic tool for quickly gauging whether a video is worth your time or not. For something like a how-to tutorial, if I see that the YouTube dislike count outnumbers the like button, I know that the tutorial doesn’t work and isn’t worth my time, right? With that being gone, it might be a little more difficult to filter things.

Of course, the act of “liking” and “disliking” a video remains, so you can still show your support or air your disapproval. It’s just not going to be a public-facing metric any longer.

What do people think?

Back when YouTube was suffering from the humiliation of putting out the most disliked YouTube video ever, Tom Leung, the director of project management at YouTube, described the possibility of removing the dislike button to be the most extreme and undemocratic option, as “not all dislikes are from dislike mobs”. He had a point.

Marques Brownlee (MKBHD) thinks “there are more downsides than upsides to this.” He’s not a fan of losing that like to dislike ratio. “That ratio is the immediately, glanceable piece of information that I can look at when I arrive on a video, to know whether it’s going to be worth my time to watch it or not.” In his video Dear YouTube, he makes a lot of sense. “Hiding dislikes actually hurts the experience of the vast number of people using YouTube as a search engine.” He adds that “hiding the public counter not just removes that scoreboard but also leaks all that negativity into the comments section, which is worse, right?”

In their press release, YouTube seemed to pre-empt this reaction and kind of just shrugged their shoulders.

“We know that you might not agree with this decision, but we believe that this is the right thing to do for the platform.

We want to create an inclusive and respectful environment where creators have the opportunity to succeed and feel safe to express themselves. This is just one of many steps we are taking to continue to protect creators from harassment. Our work is not done, and we’ll continue to invest here.”

On the flipside to MkBHD, fellow YouTuber Roberto Blake argues that YouTube removing dislikes isn’t such a big deal. In a series of Tweets, he said, “the DISLIKE counter was worthless. It never protected anyone from scams. Bad tutorials still get tons of views. Misinformation and conspiracies have wild support bases, so it’s worthless there, too…the issue with the DISLIKE counter is that no other platform outside of Reddit has it, and it’s not been essential for them too. It’s not been on YouTube comments, community posts or Shorts, and nobody has noticed or cared. It is literally worthless.”

This particular thread was an interesting one to contemplate: 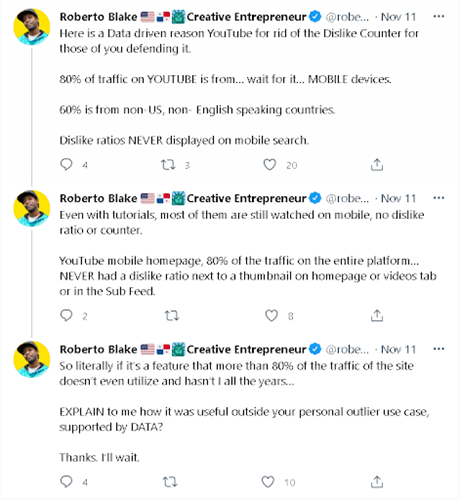 So, that’s the lowdown on YouTube removing dislikes. Ultimately, YouTube dislikes will never determine whether you can be successful on YouTube. They’re simply not that important. But I do have a feeling that this one might just rumble on for a while, given the polarized reaction across the board. Enough people seem to be passionately opposed to YouTube removing dislikes, and I wouldn’t be entirely surprised to see a U-turn or re-think on the YouTube dislike counter. However, you also can’t bet against YouTube just plowing on through with this one. They seem pretty set on it. So, what do you think about this latest YouTube update?