Why Artlist is the Best Solution for Twitch Streamers

Several high profile Twitch streamers have received a bunch of takedown notices that put their streams in danger of being deleted
Twitch’s enforcement of its rules has been inconsistent while streamers’ awareness and knowledge about copyrighted music has been lacking
Artlist is the optimal solution for streamers, offering a license that covers every platform and lasts forever

If you’ve been following web-related news, you’ve probably read about the flood of copyright takedown notices many high-profile Twitch streamers have been receiving over the past days. Ever since the launch of the gamer-centered platform in 2011, its copyright rules have been confusing at best, and enforcement has been almost non-existent. But with the growing popularity of the Amazon-owned company, especially during the pandemic, someone started to take notice of the many copyright infringements happening there and decided to take advantage.

Before getting into the details of this highly complicated issue that is now affecting the revenue of many popular streamers, anyone who uses Twitch or thinks about how to become a Twitch streamer should know that there is a simple solution they could use to avoid any copyright-related issue and make their streaming on the platform worry-free. Royalty-Free Music. More specifically, the Artlist royalty-free music platform.

There are several sources out there that provide non-copyrighted music for Twitch, but to learn why Artlist is the best solution for today’s Twitch streamer, first know what you get with a yearly Artlist subscription:

Artlist is a subscription-based licensing platform that offers its subscribers music and sound effects that can be used in a video on any platform – Twitch, YouTube, Facebook, Instagram. You name it – it’s covered.

And since Twitch clips often appear outside of the platform to attract new users, a license that covers any platform comes in handy in places like YouTube or Facebook.

As an Artlist subscriber, you have unlimited downloads and a license that does not expire. Meaning, any music you download as a subscriber can be used forever, even after your subscription ends.

Now that you have the solution, let’s explain the problem and see what exactly happened at Twitch.

A flood of copyright takedown notices

To get an idea of how serious the situation is, you need to know that as a platform committed to the DMCA, Twitch is obligated to follow through on these notices. Since each one of the recent notices could result in a copyright strike, and three strikes result in a permanent ban from the platform, streamers face a real threat to their channel’s existence.

Most of the infringing material includes thousands of recorded clips of old live broadcasts made between 2017 and 2019.

Streamers took to social media to air their frustrations with the situation and the platform.

Have talked with multiple @Twitch staff all telling me my best option is to delete all of my clips ever.

On top of it being near impossible for me to delete >100,000 clips, the creator dashboard isn’t loading any of my old clips. How am I supposed to protect myself here? (2/4) pic.twitter.com/dWnvfiIkGC

Twitch Support went to Twitter to announce the issue: 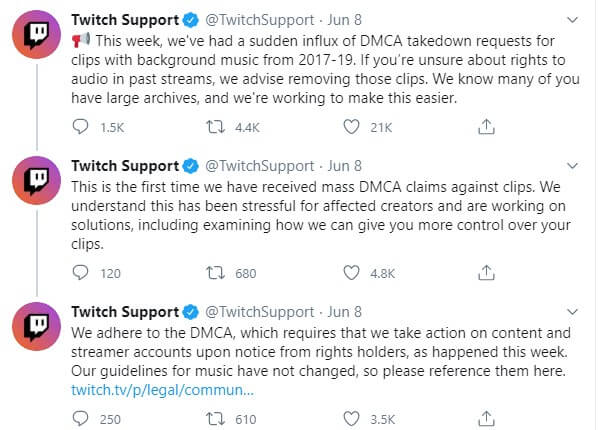 Many streamers play copyrighted music on their Twitch streams, and while Twitch has a system in place that mutes them, it is inconsistent. The problem is with clips that are up to a minute long and feature parts from different streams. These clips are mainly user-generated as opposed to streamer-generated.

Any user can create a clip from different live streams. If that clip was generated before the Twitch system muted the copyrighted music, it remains in the clip even after the stream was muted. So what you get are clips with copyrighted music spread around the Twitch platform. This means streamers have no control over many of the copyright offending clips that are now threatening to cause their channel to be permanently banned.

If you think this sounds confusing, you are not alone. Copyright rules regarding Twitch music have been confusing streamers and users for a long time, and this is not the first incident regarding music for Twitch streams.

In 2018, more than 10 popular streamers were temporarily blocked by the platform by what had turned out to be a mistaken copyright claim. Although the issue was resolved, the incident sure didn’t contribute to the clarity of the copyright situation on Twitch. Later that year, Twitch updated its copyright music policy, but this change did not result in increased enforcement. Until now.

October 2020 update: Twitch’s relationship with music continues to be very rocky. Following the June copyright incident, the platform released a playlist of music for Twitch streamers to help them avoid playing copyrighted music on Twitch. Whether or not this playlist of non-copyrighted background music for Twitch streams will satisfy streamers remains to be seen. They also recently announced that they were shutting down their Karaoke platform Twitch Sings on January 1, 2021. The Twitch Sings song list will be available to use until then.

Whatever action Twitch decides to take in the future, we hope streamers will become more aware of Twitch copyright music guidelines and solve them by using royalty-free music or non-copyrighted music for their Twitch streams.

Best Streaming Webcams for Twitch and Other Platforms

How to Build Your Twitch Streaming Setup

The Great Mirrorless Camera Showdown, Round 1