Video Editing and Getting to the Essence of the Cut

Cut your films down to as short as you possibly can, and after that, cut them down some more
Remember that every frame counts, avoid repetition and always keep the message of your video in mind
You’d be surprised what a dramatic effect cutting out “ums” and “uhs” from an interview makes

Did you ever stop to think about all the filmmaking terms we use nowadays that harken back to the good ol’ days when “films” were actually shot on film? (Uh, wait. They’re still shot on film. Back when they were only cut on film?) Terms like…

It’s that last term, cutting, that I want to talk about today. There’s another reason it’s called “cutting.” And a good editor knows what it is.

Getting to the essence of the edit

In an article about the power of video, I recently read that the average attention span of a person nowadays is just 8 seconds (that’s one second less than the attention span of a goldfish). That means when a person comes to a website, you have (on average) just 8 seconds to capture their attention. For those of you who are producing web videos for clients, you need to be aware of this fact. This is true for whatever content you’re creating, whether for yourself or for YouTube, where attention span is not only short but also challenged by dozens of other videos clamoring to reclaim it.

I’ve always felt that a shorter video is generally more effective than a longer one. Why take 4 minutes to say that which can be effectively communicated in 2 minutes? Just so you can show more pretty shots? You run the risk of losing your audience before the video is finished.

I watched a promo video that was literally twice as long as it needed to be, and it felt like it dragged (the promo, not the event for which the promo was made).

One of the hardest things for a newbie film editor to do is cut their film down. Especially if they were the director too (which is most often the case among YouTubers, small business filmmakers and videographers). There are all those cool shots you just can’t stand to leave on the proverbial “cutting room floor,” so you keep them in. Or you have all these wonderful soundbites that are just too good not to put in the video, so you keep them all. But if you want to grow as a storyteller in this medium, one of the most important things you need to learn is the discipline of cutting out anything and everything that is not absolutely needed to contribute to the story (or communicate the message if it’s a commercial production).

There’s a reason they call it “cutting” 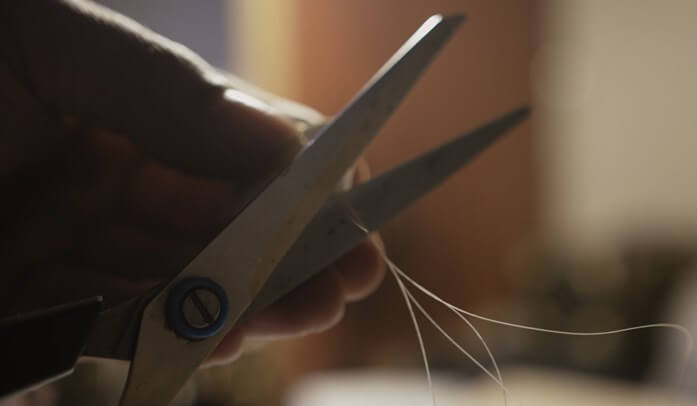 A good friend of mine, who is an Indie filmmaker, once told me a long time ago when I was just a filmmaking babe, “cut your films down to as short as you possibly can, then once you’ve done that, cut them down some more.” I always keep that advice in the back of my brain when I’m editing a project. I often have to whittle hours of footage down to just a few minutes. That means every shot, every soundbite, needs to be just right. The more “fat” left in a short film, the greater the chance of losing your audience. And in today’s world, with so much competition vying for people’s attention, each second counts.

Here are some tips from my experience.

Delivering a lot of information in little time

Take a look at this award-winning commercial for the “Got Milk” campaign. It’s only 60 seconds but look at everything you learn about this guy in that time. And pay attention to how quickly the shots go by after he hears the contest question.

In a world where the musical, “Hamilton” by Lin Manuel Miranda is a worldwide hit, this commercial is less funny. Part of the comedy in the original commercial was that not very many people would necessarily know that bit of American history. Now I’m sure everyone with access to a computer with an Internet connection knows. Nonetheless, the editing lesson still applies.

So the next time you’re editing a project, play a game. Whatever length you were initially planning to make it, cut it in half. Even if it’s just something you do aside from whatever you submit to a client. Practice cutting your films down, and when they are as short as they can be, cut them some more.

What a difference the “ums” make

Most of my work primarily consists of B-roll over dialog from interviews. One of the most effective ways to shorten an edit is to get rid of all the ums, pauses and tangential thoughts an interviewee gives. Usually, the more nervous a person is, the more of these they will have. So you want to make them as comfortable and at ease as possible during the interview itself. But even the most eloquent CEO can have several “ums,” “uhs” or other non-essential thoughts. You’d be surprised how much time you can shave off an edit when you painstakingly get rid of all these irrelevant soundbites. Not only can you shave quite a bit of time out, but your subject will be happy you made them sound more intelligent.

illustrate just how dramatic a difference it is when you extract all those “ums” from your video, I’ll use a short section of an interview from a promo I shot years ago. During that shoot, I interviewed 7 CEOs of medium to large companies. Here’s an audio excerpt from one of them. This first clip is the raw audio I started with for one section of the interview:

Now here’s that section of the interview again, this time with all the extraneous words removed:

As you can hear, it still sounds smooth. Just listening to it, you’d never guess she had as many ums and pauses as she did. And as you can see in the lower left-hand part of the player, I took that section from 22 seconds down to 14. That’s over 36%. Imagine doing that throughout an entire edit. If you did, you could easily turn a 4-minute video into a 2.5-minute video. And keep in mind that every frame counts. Two frames here, three frames there, another frame over there…they all add up over the course of the video. 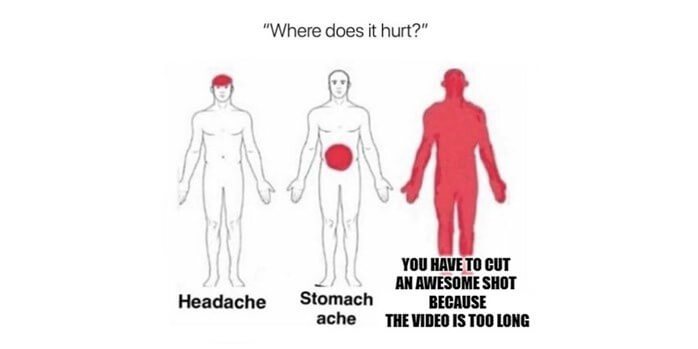 There will come times when it may be gut-wrenching cutting out what you think is a really cool soundbite. One thing to keep in mind is that the person watching the video has not seen all the footage you’re watching and listening to. So, to them, it does not feel like anything is missing and everything is new. As the editor who has seen all the footage, you’re going to be more attached to it. There is no right or wrong answer to these kinds of decisions. But I think sharing my thought processes may help some of you when you’re in the editing room trying to decide what gets relegated to the proverbial “cutting room floor.”

Just remember that advice my Indie filmmaking friend gave me: when you’ve gone through an edit and cut out everything you think you can, go through it one more time and cut some more.