Whether you’re an aspiring or established podcaster or YouTuber, you probably often think about giving your productions better audio quality. While better audio can be achieved with microphones for filmmaking, like shotgun and lav mics, as well as understanding audio editing and mixing, there is another quite handy arrow in your quiver: a portable audio recorder. They’re a great tool for creating great-sounding videos and audio projects.

You’re probably wondering what they are, how they work, and how to find the best option for your project. We’re here to help you find the best digital audio recorder for your next creative endeavor!

What is a portable audio recorder?

Also known as a “field recorder” or “handheld recorder,” a portable audio recorder combines microphone and recording technology for capturing and storing audio both in studio and on location. These digital handheld recorders, which are descended from the likes of portable analog recorders like the Swiss-made Nagra (especially the IV series) and Germany’s Marantz, come in a variety of sizes and price points. 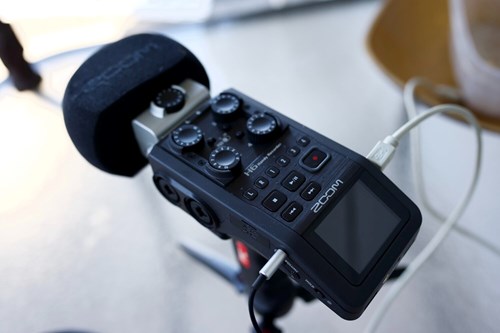 Years ago, journalists used quite small handheld recorders—often either the Olympus or Sony brands—for interviewing subjects when reporting on stories. While these “voice recorders” are still produced, larger handheld recorders made by Tascam, Zoom and Sony now give musicians, filmmakers, videographers and podcasters a highly portable and budget-friendly option for audio recording, whatever their needs might be.

The typical form factor of these handheld recorders is about the size of a smartphone or smaller.  Most often two microphones in an X-Y array sit atop the device (some have 5-mic arrays), while a screen and buttons give users access to and control of audio levels and audio recording folders. (In the stereo X-Y array, two mics are placed next to each other so that the diaphragms are as close as possible without touching.) Many handheld recorders also offer two XLR input jacks for attaching external microphones, like studio, lav and shotgun mics.

This combination of portability and digital recording and storage makes handheld recorders incredibly popular with podcasters, YouTubers and filmmakers. And, as we said, they can even be used by bands for music demos or, in the case of the band Micachu and the Shapes’ 2015 record Good Bad Happy Sad, used to record an entire album. (The band used the Zoom H2 Handy portable recorder to record the record.)

When to use an audio recorder

As we hinted at the end of the previous section, portable audio recorders have a variety of uses. So, the question of when to use a handheld recorder yields a variety of answers. It can depend on the type of project, the budget, intentional creative limitations (as with Micachu and the Shapes), or simple considerations like keeping podcasting or videography/filmmaking gear light and portable.

You’ll also want to think about using a portable audio recorder versus recording audio directly to the camera. Handheld recorders have some major advantages, like better signal-to-noise ratio, separating the audio track from the video, and more audio editing options (a combination of boom and lav mics, for instance, instead of just one of them). 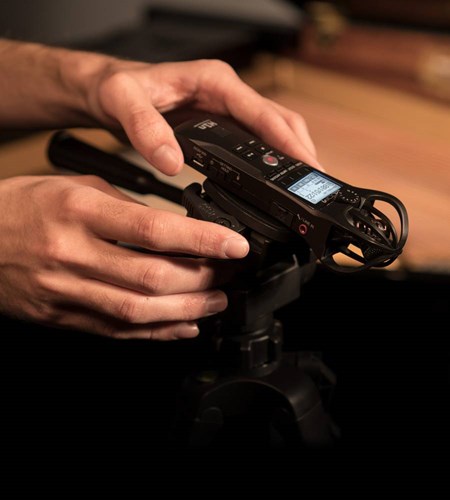 In the early stages of your podcast or YouTube productions or even music demoing process, you might be just fine using your smartphone’s audio recording technology. But you’ll quickly realize that handheld recorders offer far better recording quality, from features like mic arrays to controls, storage capacity and file formats.

Handheld recorders are also great when it’s clear that their built-in mics will serve the project well instead of using external microphones. (Years ago, I used a Zoom H2 handheld recorder to record an interview for a short documentary I shot titled “How to Disappear.”)

The key takeaway here is that digital audio recorders are incredibly versatile. It’s all a matter of the ways you can think of using them, which might include making field recordings, foley sound production, sound effects, journalistic interviews or even capturing real-world sounds to then sample for music production. The possibilities are pretty limitless.

How to use a digital audio recorder

By now you might have some sense of how handheld recorders work. But if you’re wondering how to use one, here are some quick tips, both for audio (podcasting, for instance) and video production (YouTube, short films, etc.).

If you plan to use a handheld recorder for video production, you can go with the low-budget approach of using it as-is. In other words, you use just the onboard mic array.

These digital recorders typically have tripods that allow you to stand it up during recording. You can also mount the recorder to your camera using a shoe mount or to a boom pole if you want to get closer to your interview subject or another sound source. If you use the tripod, be sure to use framing that captures what you need visually while keeping the recorder off-frame.

All of these are great options. But consider getting a windscreen or dead cat wind muff to reduce pops, clicks and other unwanted audio noise.

For audio, again use the 24-bit/48 kHz WAV sample rate. If your project is audio-based, like a podcast or sound art installation, you can place the handheld recorder as close as you like to the sound source.

Looking to create more professional audio recordings with your handheld recorder? Consider adding one or more external microphones to your gear.

As we noted above a few times, look into lavalier, shotgun and even studio microphones. While your handheld recorder’s built-in mic arrays are great, external mics will really level up your audio production. If you combine mics with recording at higher sample rates and SD cards for greater storage, you’ll notice a marked increase in audio quality for your productions.

If you don’t know where to start in looking for the best budget and professional handheld recorders, don’t worry. We’ve put together a list of some of your best portable audio recorders out there. While it might seem like the handheld recorder battle is really between Zoom vs Tascam, there are other options.

For budget handheld recorders, start by looking for ones with mics that have the visible X-Y stereo mic array we talked about above. The Tascam DR-05X is a highly affordable and compact ($119) recorder, but keep in mind you won’t be able to attach professional mics to it. At a similar price point is the Zoom H1n, which comes with a 3.5mm Mic/Line that would allow you to attach a lavalier mic. The Roland R-07 ($179) is a good alternative to both the DR-05X and H1n with similar functionality, though it does come with Bluetooth connectivity if that’s important to your production. 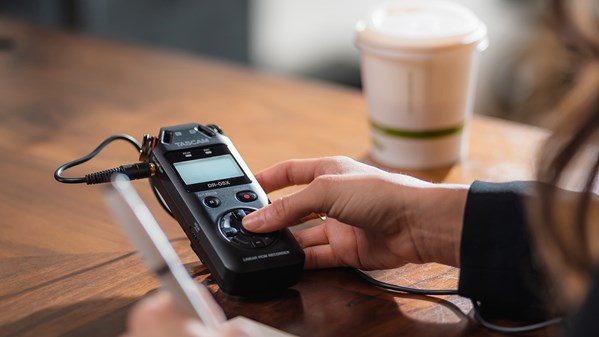 Searching for a great cheap portable audio recorder for video production and maybe even some audio projects? Take a look at the RØDE Wireless Go II. An ultra-compact wireless transmitter and receiver, the GO II is equipped with an omnidirectional condenser mic for recording, as well as a 3.5mm TRS input for lav mic. RØDE also supplies the GO II with windshields for adverse recording conditions. 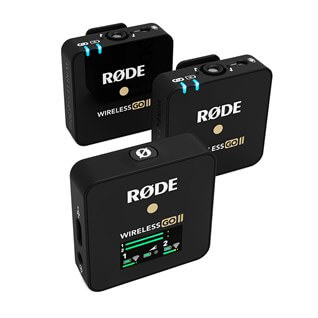 A step up would be Sony’s PCM-A10 ($229.99 on B&H), which has a built-in 3-mic array, 16GB of memory, and a microSD slot. The PCM-A10’s 3-mic array is adjustable with a “zoom” mode, XY array for music recording, and wide stereo for exterior events. In this price range, the Tascam DR-40X is maybe the best available portable audio recorder with its adjustable mics, 4-track recording, 2-in/2-out USB audio interface, XLR/TRS combo inputs, and built-in +48V phantom power. That is a lot of functionality to pack into the price! The Zoom H4 ($249) should also most definitely be considered, with its combination of X-Y mic array and XLR-1/4″ combo inputs and a 3.5mm stereo mini-jack input for external microphones. If you want to spend a bit more money for more capability without breaking the bank, the Marantz Pro PMD-661 MkIII ($349 on Adorama) is a great option, with its built-in two-mic array and XLR inputs for external mics. The Zoom H5 ($299) is a bit more expensive than the H4 and there is a reason for it: the H5’s modular mic system allows users to swap out the X-Y array for mid-side and shotgun mic capsules without spending money on expensive external microphones. It can also record up to 4 input signals, making it a great option for recording up to 4 sound sources at once. 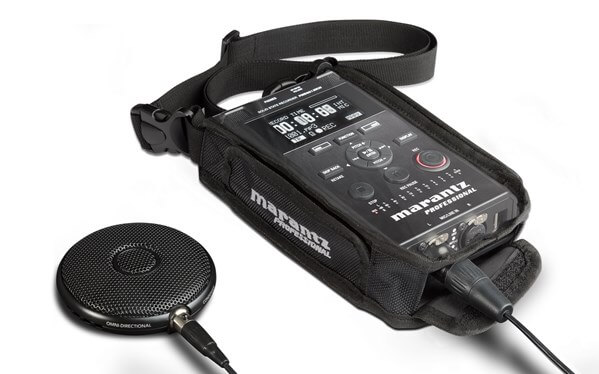 Looking for a recorder that is highly portable but handheld? Consider the Sound Devices Mixpre II series. An industry standard, this series is equipped with 32-bit float recording (a format with a lot of headroom and fidelity), 192 kHz recording, timecode generators, 192 kHz recording, adjustable limiters and auto-copy to USB drives. 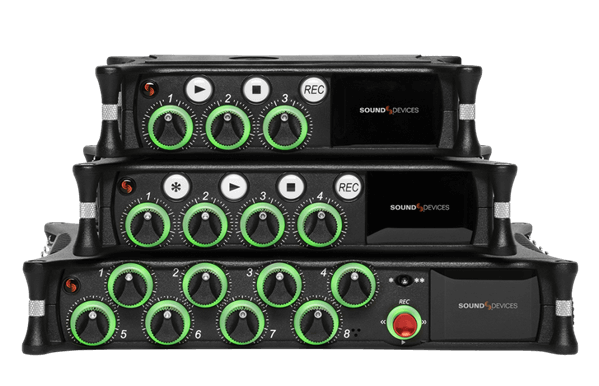 That said, the  Zoom H6 ($349.99 on B&H) is a great competitor to the PCM-D10 and may be the preferred option for some creators, especially those who want to use it for multiple media. The H6 comes with 4 XLR/Line inputs for external mics (with accompanying phantom power for each) and a capsule for stereo ⅛” Mic/Line-In mini phone jack. It also features 6-track recording capability, a 2-inch full-color display, built-in effects, and a stereo USB audio interface. Zoom bills the H6 as the most versatile handheld recorder out there, and it’s easy to see why when looking at its specs. 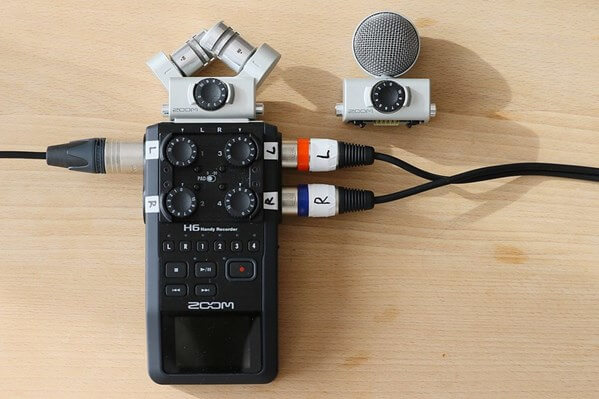 As you research handheld recorders, take time to consider how you plan to use them. You won’t need the most feature-rich portable audio recorder if you’re a reporter who’s recording interviews that you plan to transcribe for online publications. But if you’re shooting professional videos or podcasts, or even making live music recordings, these feature-rich handheld recorders might be just what you need.

After figuring out how you want to use a handheld record, we recommend you really dive into the technical specifications. If you don’t need multiple XLR/Line-In inputs, then go with a budget-friendly recorder. If you need those inputs for music recording or to record multiple guests simultaneously on your podcast, then consider more professional handheld recorders.

Remember, handheld recorders create a separate audio track on video recordings. So, when editing video you’ll need to sync your portable audio recorder’s sound to the edited video. To do this, you will need to have an injected time code as a sync track recorded on your camera. Alternatively, you can record both the audio from the camera and the audio from your portable recorder. Adobe Premiere Pro users can always select both the portable and camera audio files, then right-click and press “synchronize audio” during post-production. Another great tool in matching the audio and video tracks is a film slate (or your hands), which can create a clap to help set a sync point. Use the clap before each take!

How to Step Up Your Audio Monitoring Game

Hard Light vs. Soft Light: An Introduction to Quality of Light