How to Use a Green Screen the Right Way

A few months ago we launched a campaign to promote our Friend-to-Friend referral program, which can earn you between 2 extra months up to a free lifetime subscription to Artlist.

Not bad, right? When making the campaign’s commercial, we used a green screen, which is a technique that can give filmmakers a lot of flexibility as well as save time and money. However, many pitfalls await the inexperienced green screen user, so we thought it would be a great idea to talk about how to use a green screen and outline the dos and don’ts of this highly useful method.

How to Use a Green Screen

1. Stretch it as tight as you can

Your green screen needs to be as smooth as possible. Any wrinkle or deformity will create unwanted shadows which will make it harder to cut your subject out of it. Clamps are a good way to hold your fabric tight.

Placing your subject too close to the green screen will result in shadows on the screen or light spills on your subject. Light spills are especially problematic because they can be missed when shooting, and once you see them in post-production, it will be a pain in the butt to key them out. You need to make sure to place the subject at a good distance from your green screen.

The more separation you have between your talent and the green screen, the better, as it will be easier to key it out later. Once you’ve got the distance set, separate the subject even more with backlight.

When your green screen lighting is even, it will make the process of keying it out so much smoother. 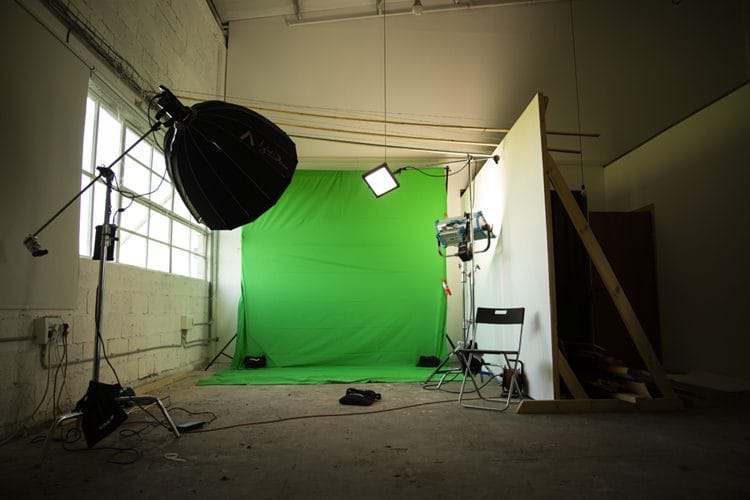 5. Shoot on a high shutter speed

If you film fast movements, the camera will have a hard time picking out the movements from the green screen, resulting in motion blurs. Using 1/250 seconds shutter speed or higher will ensure you won’t get any blurs.

This is kind of obvious, but we’re going to say it anyway. The enemy of the green screen is the color green, so don’t dress your subjects in anything green or use any green accessories.

Now that we covered the green screen basics, let’s dive into the two sets we used to shoot this commercial and the transition between them.

Jane is our heroine. She’s a fashion vlogger and a subscriber since Artlist offers plenty of vlog music to choose from. We knew we needed to make her room look fresh and poppy, so we used props with vibrant colors. To deepen her character, we placed some Easter eggs in her room in the form of two big posters with album art from our site and texts that are relevant to the friendship theme of our commercial, like ‘Tell Your Friends’ and ‘Lifetime of Music’, both referring to the lifetime subscription you can win if 10 of your friends subscribe to Artlist through your personal link.

To separate Jane from the background, we had the Westcott Flex RGB for the backlight. For the key light to focus on our subject and eliminate any spills on the back wall, we mounted a snoot to the Aputure 120d. We also relied on natural sunlight and added a diffuser next to the window to get a softer look. To capture that sunset vibe, we set the Arri SkyPanel on orange light and placed it outside the window as well.

In this production, we recorded sound live, so we needed to dry up the set. To make the room sound like a real bedroom, we installed echo-eliminating acoustic panels. We recorded the sound using a Sennheiser Lavalier mic and a Røde shotgun mic. However, we didn’t want to place all our chips on the sound from the set, so we recorded sound in dubbing as a back-up. 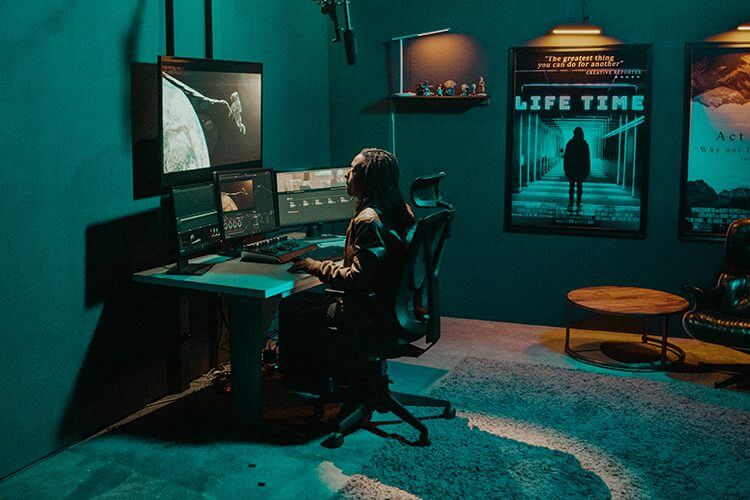 We wanted the room to look like it belongs to a pro editor room, so we hung 3 posters on the wall that look like they are for films he worked on. Here we also added texts that are relevant to our theme, like ‘Friendship Matters’ and ‘Lifetime of Music’. To light them, we used the Spekular Spiffy gears and added yellow gels to create nice color contrast between the posters and the editor, who was lit with daylight temperature.

To build the pro editing station, we added a Blackmagic Design DaVinci Resolve Micro Panel, 3 monitors and a big screen TV. As for the lighting, to make our filmmaker pop out of the frame we used the Aputure 120d for the key light. Since most editing rooms have some colored lights, we also used the Westcott RGB for the fill light on our filmmaker.

The transition between the two rooms illustrates our characters’ close friendship, so we built the two sets in a way that enabled the camera to easily move between them. The rooms you see between the sets were composited in Cinema 4D, while the city background and the characters in the rooms were composited in After Effects. To give the transition a little bit more style, we added some Optical Flares from Video Copilot.

Now you know your green screen ABC’s. Check out our tips for creating contrast through color grading and Join us for the next BTS to learn more pro filmmaking tips and tricks. In the meantime, stay creative!

Acclaimed VFX Supervisor John FK Parenteau Talks About How He Got Started, Working with Spielberg & Gives Tips for the Edit Challenge

Here Are the Winners of the Artlist & Artgrid Edit Challenge