How to Teach Your Dog to Edit a Video

When Jordan’s dog, Boomer, had a little tumble and chipped one of the bones in his elbow, the doctor ordered him to take things easy. This meant the lovable Burmese Mountain dog couldn’t do any running or hard exercise. When you have such an energetic dog who can’t do physical exercise, you need to exercise him mentally So, Jordan did the only logical thing any dog-owning editor would do – teach Boomer to edit in Premiere Pro.

Hey, if Boomer can edit a video – so can you!

Since Jordan couldn’t just teach Boomer to edit by sitting him in front of a computer, he looked for a more dog-friendly solution that would allow the dog to input commands into the computer. 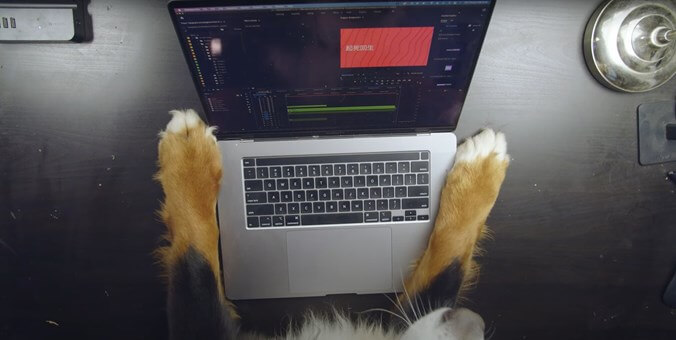 So he ordered 10 USB buttons and connected them to his computer using a USB hub. He programmed each button to have 2 Premiere keyboard shortcuts and set 1 cycle button that turned the 9 buttons into 18 commands. Premiere has a ton of keyboard shortcuts, so Jordan chose those essential for editing a video from start to finish.

After mounting all the buttons to a dog-friendly desk, it was time to bring in the dog and start teaching him the controls. Boomer, the good boy that he is, already knew various commands, like ‘Sit’, ‘Down,’ ‘Heel’, ‘Spin’, ‘Back-up’ and ‘Touch’, which is the most useful command for this project. 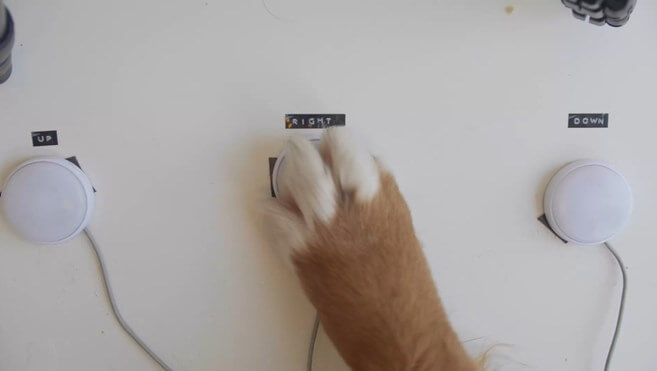 You’re probably wondering how a dog can navigate on a computer. To achieve that, Jordan set up four buttons that moved the mouse up, down, left and right. To make things as simple as possible, Jordan and Boomer used a Motion Array template. The project file was located in the middle of the screen, so all Boomer had to do was navigate up to that file and click the ‘Double Click’ button to open the project. 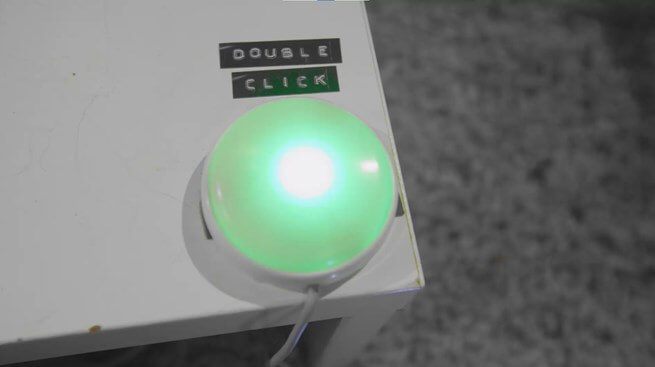 While Boomer responded very well to the ‘touch’ command, his accuracy left a lot to be desired. Even when he managed to touch the button, Jordan couldn’t get him to let go before the cursor drifted off the screen, so he went back to the drawing board.

Jordan’s solution was using a hotkey script that moved the cursor by a specific amount of distance each time Boomer touched it instead of the mouse’s smooth gliding motion.

Using his favorite treats as an incentive, Jordan guided his dog to move the cursor to the icon and open it with the ‘Double Click’ button. 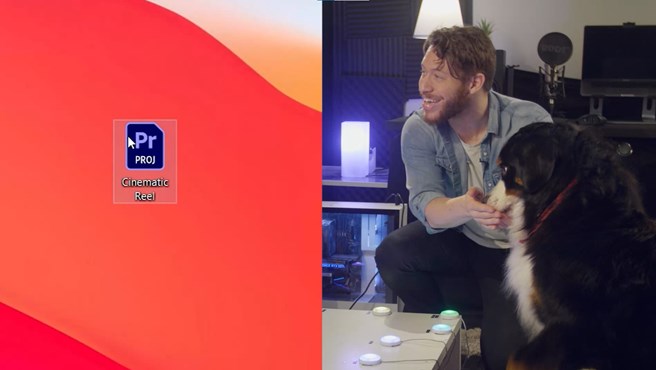 Boomer might be the first dog to open Premiere Pro.

After opening the editing software, it was time to import some footage, which meant Boomer needed to navigate the cursor to the ‘Project’ section and click anywhere in the empty space. 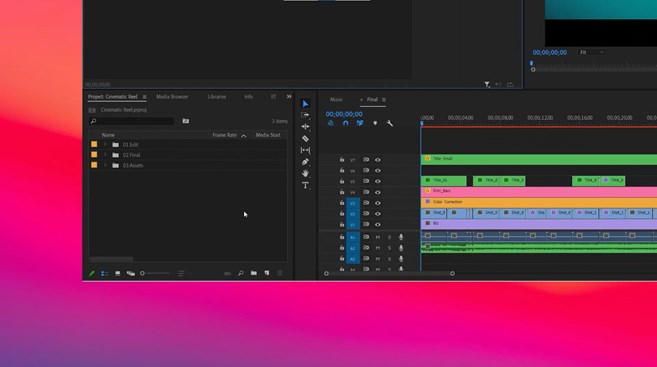 Boomer started getting a feel for touching the buttons and pretty quickly managed to open the Import folder. So now he just needed to navigate up, select the folder and then navigate down to the ‘Import Folder’ button.

But all work and no play make Boomer a dull boy, so he decided to take a few breaks to play around with Jordan.

Success! Boomer reached and double-clicked the ‘Import Folder’ button! It was going well but was also taking A LOT of time.

Before starting to place their footage into the template, Boomer needed to disable a few layers since he wasn’t going to use text in this video (poor typing skills). Fortunately, only one click was needed to disable all the layers, which he did expertly.

Now they had to make 2 slight adjustments to the footage they were using – delete 2 sections and extend one section so that it plays out longer. To do that, Boomer needed to delete shot no. 2 by navigating to it, highlighting and deleting it, which he did.

He’s such a good boy!

Now came the part of extending the first clip to fill in the empty space by highlighting the end of the first clip, moving the play head over to the next clip and then clicking the ‘Extend to Edit’ button. 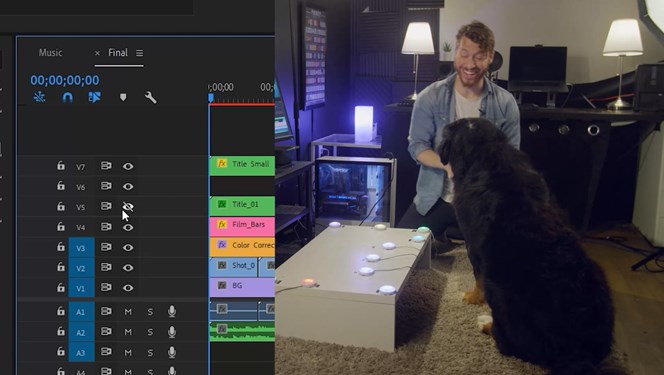 Jordan and Boomer were going at a pretty good pace until the ‘Down’ button broke. While Boomer was trying to console his friend, the duo figured out a creative solution – to program the ‘Right’ button to move down diagonally to the right. They were back on their way to finishing the project, though it meant that it would take longer to accomplish it. 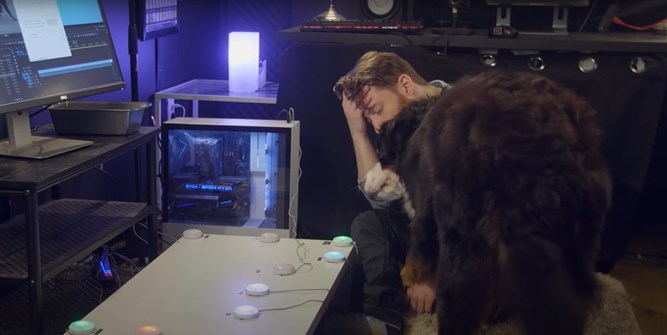 Thankfully, they just needed to put in 2 more shots and chop out one section. By cycling the pads, Jordan was able to make one button act as ‘Command+Shift+K’ to cut the entire timeline and remove the unwanted area. 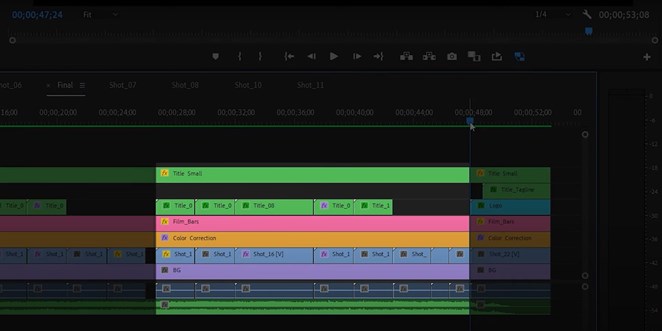 Then Jordan had to guide Boomer to go through and delete all the clips in that section one by one.

The template Boomer and Jordan used features a default preview track, which meant that it already has music with perfect timing without Boomer needing to do any editing to the music.

It was export time.

Using the default settings and already having the Export highlighted, all Boomer needed to do was click Render to become the first dog to have officially ever edited a video.

Although Boomer will not pursue a career in editing, both he and Jordan learned valuable lessons from their shared experience, most importantly that nothing can stop you from learning how to edit amazing videos, even if that thing is not having opposable thumbs.

As a tribute to their journey, Jordan permanently installed a button beside the couch Boomer liked to watch him editing that automatically saves the project, a small way in which Boomer could help Jordan in his work.

Another lesson learned here is that Motion Array templates are so easy to use that even a dog can learn how to use them. So check out the template used in this video and the over half a million templates on Motion Array that help creators make better videos.

5 Reasons Why Artlist Should Be Your Music Licensing Site