The Fresnel light was initially developed for use in lighthouses, and they are thought to have saved millions of sailors’ lives
The Fresnel light is highly versatile and can be used as both a spot and a flood
Fresnel lights are simple to use but can get very hot

Quiz question for you: What links lighthouses, theaters and film sets? Got it yet? It’s the Fresnel light, sometimes known as the Fresnel lantern or Fresnel lamp. While the Fresnel light was initially developed in the 1820s by French engineer Augustin Jean Fresnel to improve lighthouses, it has become a staple of the film and theater industries. The Fresnel light produces a highly versatile light that you can use as a spot or a flood, as part of the 3-point lighting setup and high- and low-key lighting.

Fresnel – a quick pronunciation guide: Fresnel still carries the French pronunciation of its inventor. That means it’s “frey-NEL,” with the emphasis on the second syllable, rather than “frezz-nul.”

What is a Fresnel light?

A Fresnel light consists of a lamp positioned between a Fresnel lens and a reflector, housed in a box. The light from the lamp is sent toward the lens by the reflector, forming a controllable beam. 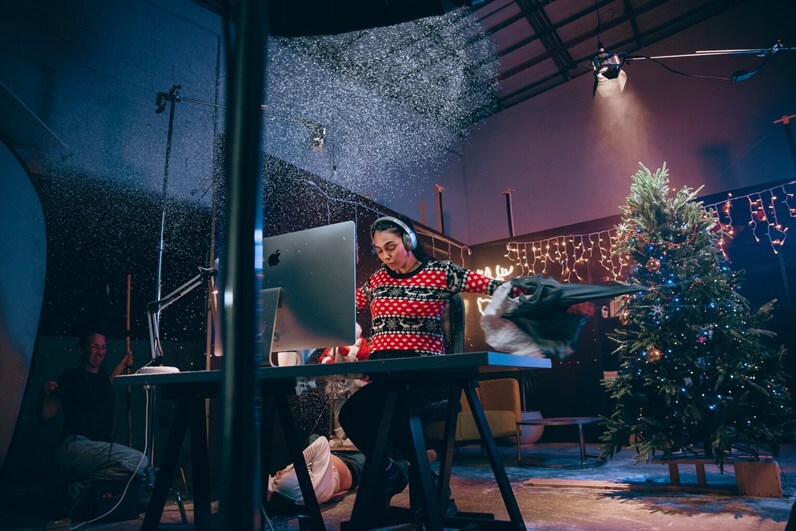 A Fresnel lens comprises layers of concentric rings, each smaller than the previous one, rather than a regular spherical lens. Each ring bends the light a little more than the one beneath it, steadily converging the light into a beam. These concentric rings are what Fresnel worked on in order to improve lighthouse lanterns. The size of a regular lens would have been impractical to produce a beam of the required width and intensity to be effective in a lighthouse. Still, the bending properties of the concentric rings changed that.

The lamp, which can vary in wattage, and the reflector sit on a track and can be moved closer to or farther from the Fresnel lens to widen or narrow the light beam. In addition, you can attach light modifiers to the front of the box, for example, barn doors, to help control the beam.

How do you use a Fresnel light?

Fresnel lights are very simple to use, making them excellent choices for any set, including as lighting for YouTube videos.

If you move the lamp closer to the Fresnel lens, you get a wider fall of light that can flood a scene. Shift the lamp and reflector farther away from the lens, and the light beam becomes narrower, giving you a spotlight. This is what makes a Fresnel light so convenient: you can alter the beam angle from a Fresnel light without having to move the light itself.

It’s easy to attach modifiers to the front of a Fresnel lamp. For example, barn doors are used to shape light, scrims to help reduce light intensity, gels for color correction and speed rings for adding a softbox.

The lamps for Fresnel lights come in different wattages and, therefore, intensities. They also have unusual names, given to them by Mole Richardson:

Please don’t ever touch the glass lamp in a Fresnel light! If you do it when it’s hot, you’ll give yourself a terrible burn. If you touch it when it’s cold, your skin can leave an oil mark. Then, when the light heats up, the oil can cause the glass to explode.

What do you use Fresnel lights for?

So much of the Fresnel light’s appeal is its versatility. You can use it as part of a YouTube lighting setup to give soft, even light, or narrow the beam to produce a hard light for something dramatic. And you don’t have to move the light to change its quality: you twist a knob to adjust the lamp’s position and reflector. If you can and want to move the entire light, you give yourself even more lighting diversity.

For example, the overhead beam at the opening of this video is from a Fresnel light:

You can use a Fresnel light for any light making up part of a 3-point lighting setup, whether it’s as the key light, fill light, for backlighting or to light the background.

Here, a Fresnel light was used to give definition to the subject:

When you might want a high-key effect in product shoots, you can flood your set easily with a Fresnel light.

If you need to light something very specific with a hard cone of light and no spill, for example, if you’re shooting a night scene, you might find a Fresnel spotlight effect very useful. A Fresnel light spills far less than an open face light, allowing you much more control.

You can see the spot beam in this video, which was created with a Fresnel light:

Here, 2 Fresnels were used to specifically light objects on set to give them pop:

From commercial product shoots to interviews and vlogging, the versatility of the Fresnel light offers you lots of techniques in one box.

What are the pros and cons of a Fresnel light?

+ Very simple to use

+ Highly versatile – they can be used as key lights, fill lights, backlights, floodlights and create high-key and low-key lighting

– They get very hot

– Newer LED Fresnel lights do not generate as much heat, but their color is often less desirable than older tungsten models, although some do have controllable color

– Some of the newer, high power LED Fresnels can produce fan noise

– They can be expensive

When you’ve tried shooting with a Fresnel light, the chances are that you will always want to have one with you. They might be expensive, but when you trade that off against their adaptability, you could find that they really are worth it.

YouTube Channel Breakdown: How Film Riot’s Ryan Connolly Is Teaching the Next Generation of Filmmakers