Sarah’s lyrics are snapshots into her personal triumphs and losses, with the artist using music as a way to process her own life experiences
Sarah Angel’s listenership skyrocketed when her track was used in The Daily Stretch video, which has over 40 million views on YouTube
Sarah hopes to lead by example and inspire marginalized artists to find their voices and share their narratives

Sarah remembers the exact moment she fell in love with music. She was 8 years old, watching a singer/songwriter called Alex play at a festival in Liverpool. “He was just standing there on stage with his guitar, singing with his whole heart, and I just cried and cried and cried.”

Sarah Angel will tell you herself she’s a very emotional person. Her songwriting process is a mix between a diary and therapy, which is probably why her music connects with so many people. Her raw, unfiltered experiences will pull on the heartstrings of anyone going through turmoil themselves.

…I realized this entertainment business is a setup, and if you aren’t what they envision, then it’s game over for you.

Today she’s chatting from her new home in South London, looking like she’s come straight from a shoot. Her makeup is flawless and her clothes runway-ready, but most striking is her big, beautiful personality. It’s as easy to talk to Sarah as it is to listen to her music. She’s like a big river, overflowing with energy, sweeping everyone she meets along with her, and she’s just as open in conversation as she is in song.

“Growing up in Bolton, I didn’t see people who looked like me for a long time,” she says. “Being dark-skinned, a Black girl, and being adopted, I felt really misunderstood and alone.” Before discovering music, Sarah had nowhere to channel these feelings, but once her adoptive parents brought her a keyboard, she finally had an outlet. From the age of 11, she entered every talent show in her immediate vicinity, sang in the church choir and played Liesl in The Sound of Music. Then, at age 14, Sarah convinced her school friends to form a girl band. She directed the entire project, chose the songs, made up the choreography and signed them up to audition for X factor 3 years in a row. “None of the auditions ever quite worked… but a man dressed up as a pig crawling around on stage got through. That’s when I realized this entertainment business is a setup, and if you aren’t what they envision, then it’s game over for you.”

[The producer] didn’t go easy on me. But he believed in me first and foremost, and it set me up for how intense being a musician was going to be.”

Sarah enjoyed being part of a girl band, but her friends were nowhere near as committed as she was. Although Sarah laughs about this now, these early escapades show just how determined and driven she was to make music a career from a young age. Music was a way to connect in a world where she felt displaced, and she used her words, voice and keyboard to express her pure, undiluted self.

Sarah’s creativity was uncontainable, and when she left school, she started working in fashion as a model, creative director and filmmaker. In 2016, a friend put her in touch with an ex-member of the band Kid British who was looking for a singer-songwriter. Sarah volunteered her services and spent 12 hours in a studio writing, singing, recording, messing up and doing it all over again. “It was heavy going. [The producer] didn’t go easy on me. But he believed in me first and foremost, and it set me up for how intense being a musician was going to be.”

‘Dreamland‘ is an experimental pop-RnB album full of groove and Soul,

The session was grueling, but afterward, Sarah felt liberated and knew this was what she wanted to do with her life. “The next step was to create my own song, so I worked with the same producer on a track called You and created my own music video using all my skills. I made a little set in my kitchen, which totally ruined my ceiling.” The song went on to feature in an advert from British footwear retailer FOOTASYLUM, which sent Sarah’s confidence skyrocketing. After that, she continued to make music in the studio, gliding between RnB, soul, house-funk, hip hop and everything else in between. She’s released 8 music videos, 17 singles and 13 fashion films to date, and her music was used by Jaguar, Kyra TV, BBC 3 and ITV.

Sarah started working with Artlist in 2019, and in 2020 her track Lakeview was used in The Daily Stretch on YouTube, which exposed her music to around 40 million people. Lakeview is the ultimate chill-out track – a smooth, RnB slow-jam, the perfect song to unwind to. Most striking is Sarah’s vocals, so full of depth, texture and emotion it’s no wonder the views skyrocketed after the Daily Stretch featured it. The official video has 45,000 views, significantly more than her other videos, with new fans commenting to say they Shazamed the track while stretching out their quads. Now Sarah has fans in every corner of the globe. We call it the Artlist Effect.

More than anything, though, music has served as a way for Sarah to tell her story, process her feelings and share her perspective. She doesn’t shy away from delving into her personal life in her music. “I have a track called Do You Even Love Me?. And maybe someone else would think I’m talking about a relationship, but it’s actually about my adoptive parents. And Skydiving Through Time is about surviving depression.” 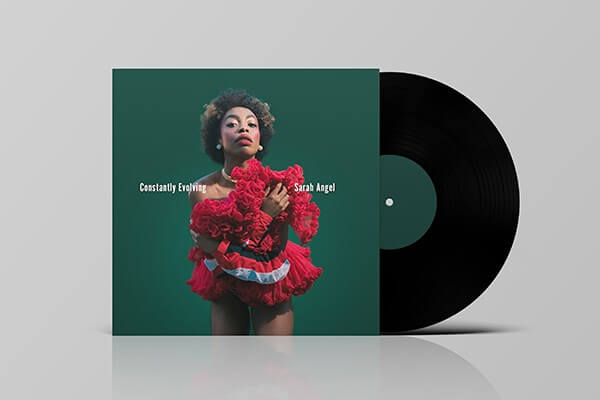 On ‘Constantly Evolving‘, Sarah gives space for her deepest dreams and desires

Sarah’s YouTube channel is another form of personal documentation. She’ll share her songwriting process, music videos, home beauty tips and more. “I want it to be useful,” she says. “So I’ll share makeup and hair mask tutorials on it. I want to empower young Black women in their own self-worth, to embrace their natural hair, for example.”

I want to work in music and fashion and writing and art direction. And when I’m 60, I want to have an arts agency and provide opportunities for other people.

Empowering marginalized communities is a driving force behind Sarah’s art. In March last year, Sarah contributed to an Artlist feature celebrating International Women’s Day. She spoke about the barriers she’s faced as a woman and ethnic minority in the music industry. A lot has happened in the world since then, and she says the surge in awareness of the Black Lives Matter movement shortly after the interview deeply affected her. “Mentally, it took such a toll,” she says. “I was having mad debates about my experiences. it was really quite heavy.” However, Sarah says these were conversations that needed to happen, and the experience helped her grow as a person because she understood the fundamental lack of information and education on racism in the UK and beyond.

“My dream as an artist is to inspire young women,” Sarah says. “I want to work in music and fashion and writing and art direction. And when I’m 60, I want to have an arts agency and provide opportunities for other people.”

Sarah’s energy and enthusiasm are contagious. She tells me with a bright smile that the reason she’s in London is that she’s living with her birth mother. “With the extra time in lockdown, I decided to find my birth family. I always knew I was adopted, and I used to feel a lot of shame about it. But I think it’s really important that I’m open about it because being open is what has helped me get to where I am now.”

If you’d like to feature Sarah Angel’s music in your project or film, check out her page on Artlist.

Get Music Inspired by the James Bond Film Series