It seems that every other week there’s a new viral Mr Beast video that’s got all corners of the internet taking note. We’re taking a look at his meteoric rise
Jimmy is someone who really knows how to nail YouTube SEO with everything from keywords and thumbnails to the way his videos are edited specifically for audience retention
He’s also relentless. This drive has seen his subscriber number skyrocket and we feel there’s little to stop him one day becoming number one on YouTube

Take a look at the top 100 YouTube channels by subscribers, and there’s one man who’s climbing the ranks faster than anyone else. MrBeast (real name Jimmy Donaldson) is the man of the moment. After receiving the Breakout Creator award in the 2019 Streamys, Jimmy went on to win “Creator of The Year” in the 10th and 11th annual Streamy Awards (with overall 7 Streamy nominations). It seems nothing can stop him ever since he started his YouTube channel 9 years ago. By his own admission, he wants to be the greatest YouTuber of all time. Given his track record, it seems likely he’ll someday be taking the number 1 spot with the most subscribers.

So, what makes MrBeast so successful? How, at just 23 years old, has he become the king of YouTube?

Jimmy was born and raised in North Carolina and continues to operate out of his studios there. Yes, it’s studios in the plural. The scale of MrBeast’s modern-day operation is hard to believe. Working with his dedicated team, he creates and films absurd game scenarios, such as “Last to take their hand off the Lamborghini, keeps it” and “Last to leave $800,000 island keeps it.” But he also launches ambitious philanthropy projects where he gives away millions of dollars and attempts to hit huge targets in cleaning up the world’s oceans. For MrBeast, it’s go big, or go home.

Just take a look at his channel description… 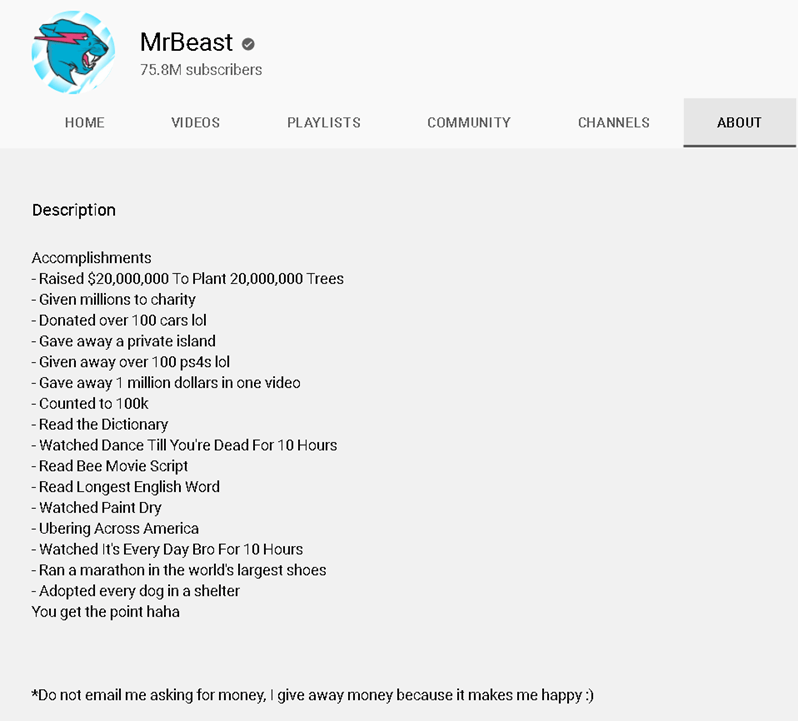 So, let’s dive into what’s made MrBeast’s channel so successful!

It’s clear from the get-go that MrBeast has a deep, extensive knowledge of YouTube. He gets it, and that’s been reflected in his success. In this recent and insightful interview with Colin & Samir, he talks about how even at a young age in school, all he could think about was YouTube. All he wanted to do was study YouTube. So instead of paying attention to what was being taught in class, he was busy studying YouTube and thinking about how he could “make it.”

Jimmy is an ideas man, and it’s no wonder that each of his videos gets 10s of millions of views. Each and every video is based on a crazy idea that makes you want to click and watch. Who doesn’t want to watch a game of tag where the winner receives $500,000 and takes place in a giant vacant stadium? Who wouldn’t be intrigued seeing a man spend 50 hours buried alive? The ideas that MrBeast comes up with are always crazy and attention-grabbing.

Alongside the ideas that help shape the titles, his thumbnails really help win clicks. Take a moment to check out his channel and study each one. They’re always bright and colorful, bold and relevant. They jump out at you. Combined with the title, they always make you want to click.

Even after Jimmy’s won your click, he doesn’t stop there. The editing of his videos is remarkable. The idea is all about audience retention. To ensure you keep watching, MrBeast’s editors make every second count. In any part of any video, multiple things are happening. They’re quick, snappy and high-octane, ensuring he has one of the highest audience retention rates around.

Hillier Smith made a fantastic editing breakdown that goes into detail on this. It’s well worth checking out:

While it can be challenging for relationship-based creators such as Emma Chamberlain to scale up, MrBeast is an ideas-based creator. People don’t necessarily watch his channel for him or his personality, but for the games and ideas he comes up with. So feasibly, Jimmy could put out a video on his channel that doesn’t feature him once, and his audience would still love it.

This has enabled the MrBeast channel and brand to scale significantly. Everything that Jimmy earns, he pours back into the channel. The more views he gets, the more revenue he receives, the more money for better videos, generating even more views. This cycle has allowed him to hire a huge production crew numbering well over 100. Together, they create different brands such as MrBeast Burger (yes, he owns a fast-food chain, and it’s highly successful) and create other channels such as Beast Reacts and MrBeast gaming – all of which bring in even more revenue.

More recently, he’s started putting out his videos in Spanish, helping him reach brand new audiences that previously were not exposed to his videos and would not have watched. And again, you guessed it, this extra revenue goes straight back into the main MrBeast channel. It’s a genius business model.

Jimmy is wholeheartedly committed to creating the best videos he can and, by default of that, becoming the number 1 YouTuber. He is obsessed with YouTube and is relentless in this pursuit of greatness. It’s what makes his channel so fun to watch.

In short, there’s really nobody quite as dedicated to YouTube as MrBeast. He did whatever it took to gain views and subscribers and will continue to innovate and change the game long into the future. Even if he were to end up in a scenario where he was starting again at 0 subscribers, I can guarantee he’d be reaching millions again in no time.

So, has MrBeast won your subscription yet? After watching just one of his videos, I was hooked, to be honest. He’s one of the most entertaining, unique and original creators on the platform, and he deserves every bit of the success he’s enjoying. I have no doubt that over the next 5 years, we’ll see his channel become the number 1 most subscribed on YouTube. So, make sure you’re on the bandwagon!

Why Talent Release Forms Are Important

How to Shoot Killer B-Roll