A good horror film doesn’t need to be a visual feast (no pun intended). On the contrary, it can be a simple story that uses suspenseful writing, directing, and editing to cast a spell on audiences, scaring them in the process. The Blair Witch Project, shot on consumer-grade video cameras, is a great example of this simplicity in action. The original Friday, the 13th, with its lo-fi aesthetic, is another great example.

Other horror and sci-fi horror films can be elevated into cinematic masterpieces with highly artistic set design and cinematography. David Lynch’s black and white film Eraserhead, while not strictly a horror film, is a good example of these factors working to enhance a film.

Below, we will talk about the colors in a few iconic horror films and the color palettes that made them great. We will also briefly mention these films’ sets and cinematography approaches, both amplified by the color grading to make them not just great horror stories but first-rate cinematic eye candy.

For color films, color correction and color grading can add an extra layer of artistry to the final cinematic results. These five horror films’ color palettes should serve as great inspiration for filmmakers’ cinematic color decisions.

Psychedelic colors, music, and sound design fill the frames of iconic Italian writer and director Dario Argento’s 1977 film, Suspiria. While red—the color of blood and death—is a main feature of Suspiria, it is not the only notable cinematic color in the film.

Before getting to this and the other main colors, it’s useful to note that Argento chose the same 3-strip Technicolor process used in Vincent Manelli’s 1939 film, The Wizard of Oz. By 1977, Technicolor had been surpassed by a more modern color film, lighting, and development techniques. Even so, The Wizard of Oz stands out for its eye-popping colors.

The same is true of Suspiria. Beyond Argento’s lighting, red can also be seen on the ballet school’s wall paint, floor tiles, character’s lipstick, flowers, stained glass, and other surfaces and objects. But the director also used vibrant greens and blues, as well as blacks and whites, to render his cinematic phantasmagoria.

The psychedelic color palette reaches its peak when the main character, a young American dancer named Susie Bannion, enters a bedroom. In it, the viewers can see a multi-colored neon peacock lamp, followed by dressers, curtains, a candelabra, a mirror, and a bed, each illuminated either in red, blue, yellow or some combination of the three colors.

With these colors, Argento tried to create an effect that was hallucinatory, disorienting, and full of supernatural horror. Combined with the film’s sound design and the musician compositions by the psychedelic band Goblin, the film certainly has its intended effect on viewers.

While much of Suspiria’s color was created by Giuseppe Bassan’s German Expressionist set design and Luciano Tovoli’s camerawork and lighting, the film definitely benefited from expert color sensibility. The colors really make the German Expressionist light contrast and colors pop in a surreal way.

What immediately stands out with David Cronenberg’s 1983 film Videodrome is its almost unremarkable look—at first. Yes, the film opens on a television set in a dark room with the mysterious “CIVIC-TV” message, a notably artistic choice. Still, it pretty quickly shifts into a sort of grimy or gritty palette of grays and deep shadows. This look dominates apartments, hallways, offices, and even the Toronto exteriors. 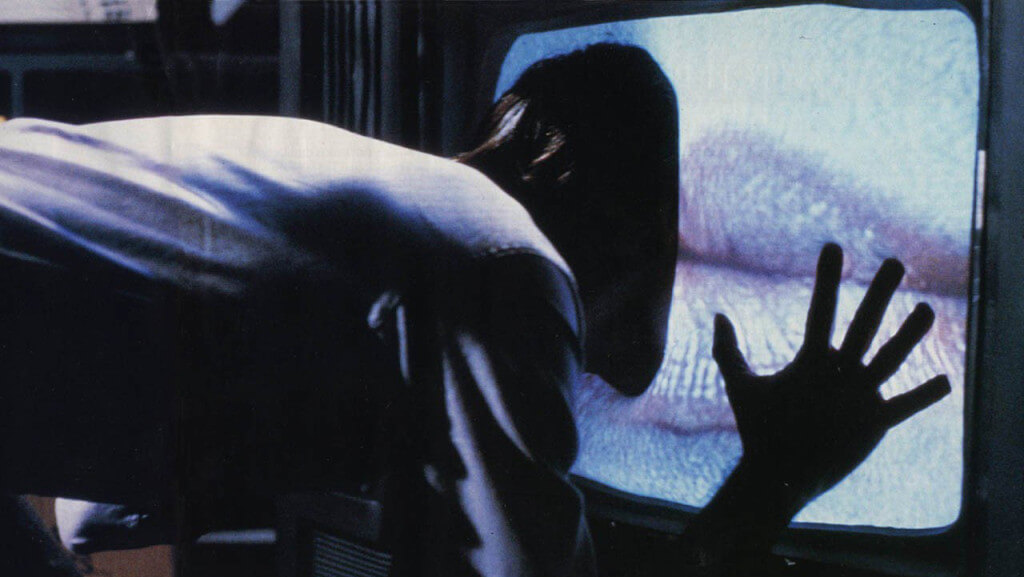 But the film color palette on Videodrome is interesting for a couple of other reasons. Sure, it manages to highlight both the grays and deep shadows, but also the frequent blue glow of cathode-ray television sets on characters and objects in the room. 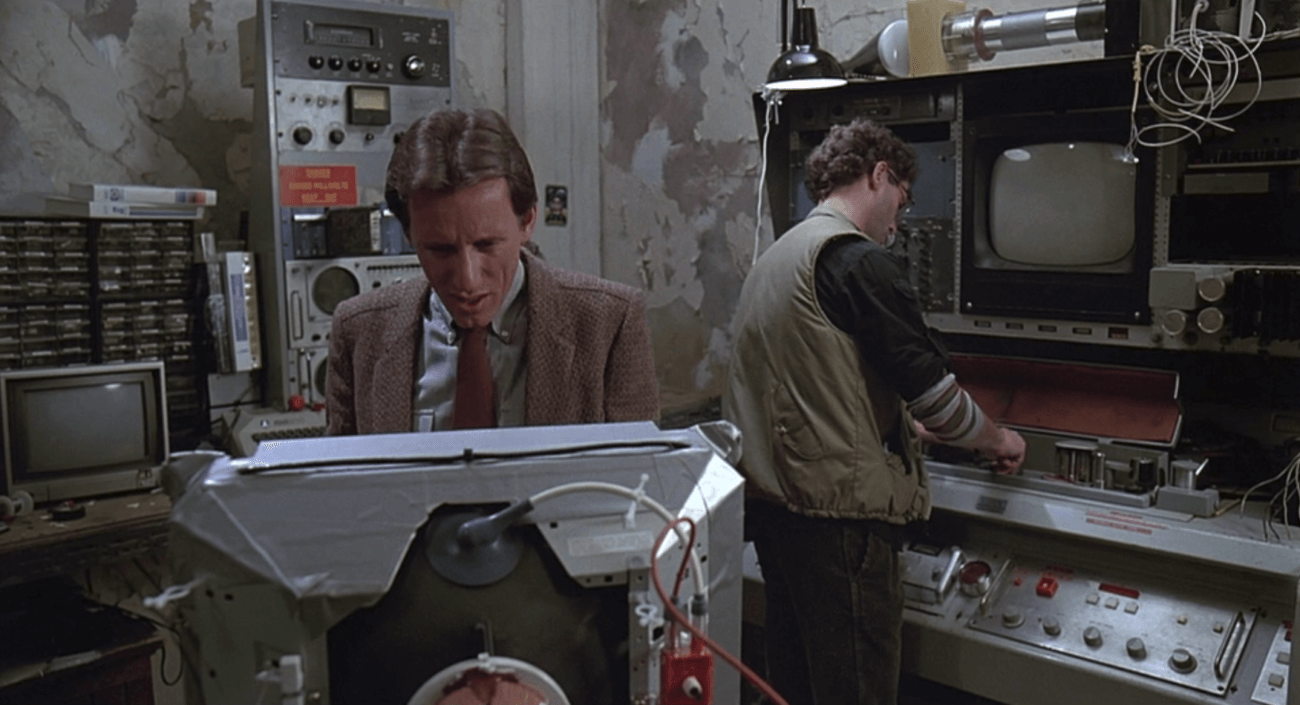 Videodrome’s color palette is also notable for scenes in which characters look at incredibly red and grainy footage of the “Videodrome” snuff sets. It stands out, even more, when the characters find that they—through some strange cybernetic hallucination—are somehow on those very sets themselves. The reds found in these scenes, which fascinate CIVIC-TV president Max Renn, stand out because they are different from the gritty grays and deep shadows of other scenes.

Speaking of reds, for most of director Panos Cosmato’s 2018 film, Mandy, viewers are plunged into a psychedelic world of primary colors. There are disorienting and foreboding reds, earthly green and some yellow, and a cold blue. There are even some scenes where red and green are paired, or red and purple.

In an interview with American Cinematographer, Mandy’s cinematographer Benjamin Loeb said they used the primary colors to move through various emotions. While early scenes have warm, organic tones of green and yellow, later scenes are often dominated by reds and blues. One notable scene is dominated by white and blue hues; when Nicolas Cage’s character, Red, confronts a drug maker who sold LSD to a cult leader that kidnapped his wife. But even this scene features Red’s blood-stained face.

Loeb captured much of these colors through lens filters, often with several stacked together. Although Cosmatos’ sets (see also: Beyond the Black Rainbow) are crafted to perfection, with great use of space and focal points, the atmosphere he creates from scene to scene really pops because of the lighting and set design’s color palette.

Mandy builds on Argento’s work with Suspiria and then surpasses it. The colors of Cosmatos’ film are hallucinatory but also really suffocating. It’s as if the light in the film’s world is constantly on the verge of disappearing, like the characters’ lives themselves.

The Thing, John Carpenter’s 1982 remake of 1951’s The Thing from Another World, is notable for its colors as for its incredible special effects and anamorphic aspect ratio. Set in Antarctica, there are distinct film color palettes for daylight and nighttime exteriors, but also ones for specific interior scenes.

As the film’s cinematographer Dean Cundey told American Cinematographer in a 2017 interview, he and Carpenter used an anamorphic lens. So, even with characters standing amidst wide vistas of mountain and snow, the frame creates a sense of claustrophobia. Carpenter and Cundey used various warm and cold colors to contrast interior and exterior environments. 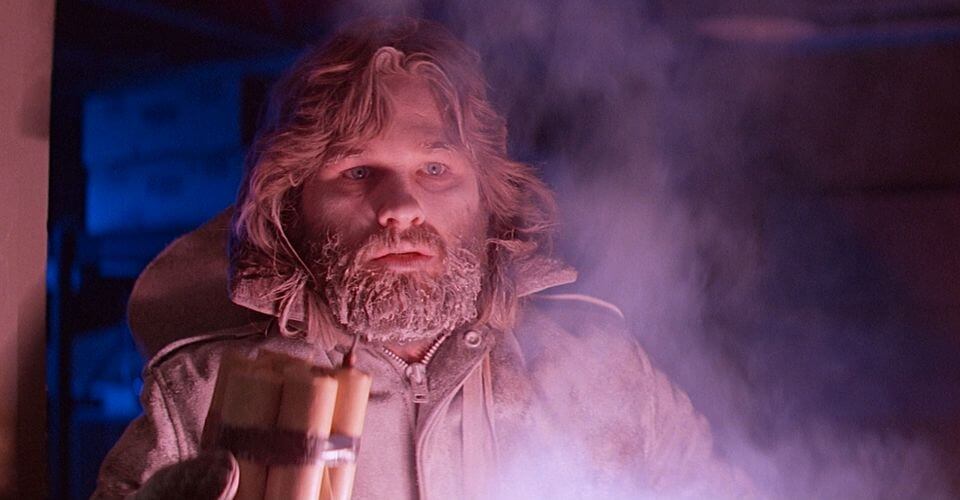 At night, vast darkness is broken by blue and white lights illuminating the snow, buildings, and characters. The interiors, on the other hand, are lit with warmer colors. In one scene, the interior of a snow vehicle features yellow light. But inside the Antarctica scientific base’s buildings, the lighting is mostly natural-looking, although full of dark shadows.

“I tried to create a strong sense of the cold by creating some contrast,” Cundey says in the interview. “The interiors were often lit with a warmer light so the audience would notice the difference between that and the exteriors, which we kept in blue tones, particularly at night.” 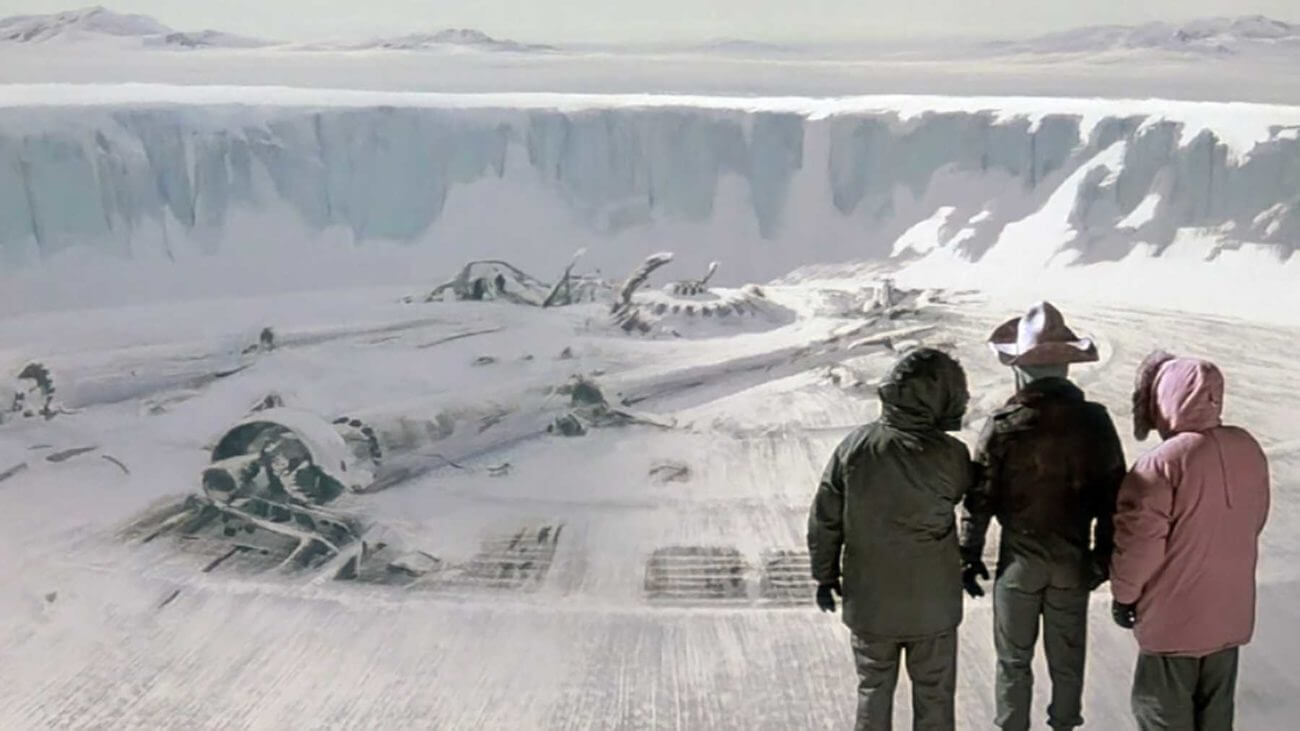 “The snow would reflect any color we put on it, so that made the outside even bluer and cooler,” he adds. “For the interiors, I had the crew build and hang overhead lights with conical shades, with the idea that we could control the light and not have the rooms completely illuminated…, There were a lot of decisions and discussions involved in trying to control the pools of light while keeping the colors warm inside and cool outside.”

In other scenes, characters use flamethrowers, which light the space with hot yellow hues. And when characters hold flares as sources of flight, they give off a magenta hue somewhere between the warm and cold color extremes. The light from the flamethrowers and flares represents fire as a visual motif.

Even after four decades, Ridley Scott’s Alien looks utterly unique. Truly, it was unlike anything seen before it. And although it influenced several science-fiction and horror films since its release, Scott’s work on Alien is lasting and instantly identifiable.

Alien is set in space on the ship Nostromo and a planet’s moon, on which the crew members find a crashed alien vessel. Both spaceships look really industrial—future industrial. The interior of Nostromo looks advanced but lived in. The alien spaceship looks highly advanced but derelict and even ancient. And much like the work of H. R. Giger, the artist who inspired Alien and worked as its concept artist, the film looks like heavy machinery cloaked in gloom. 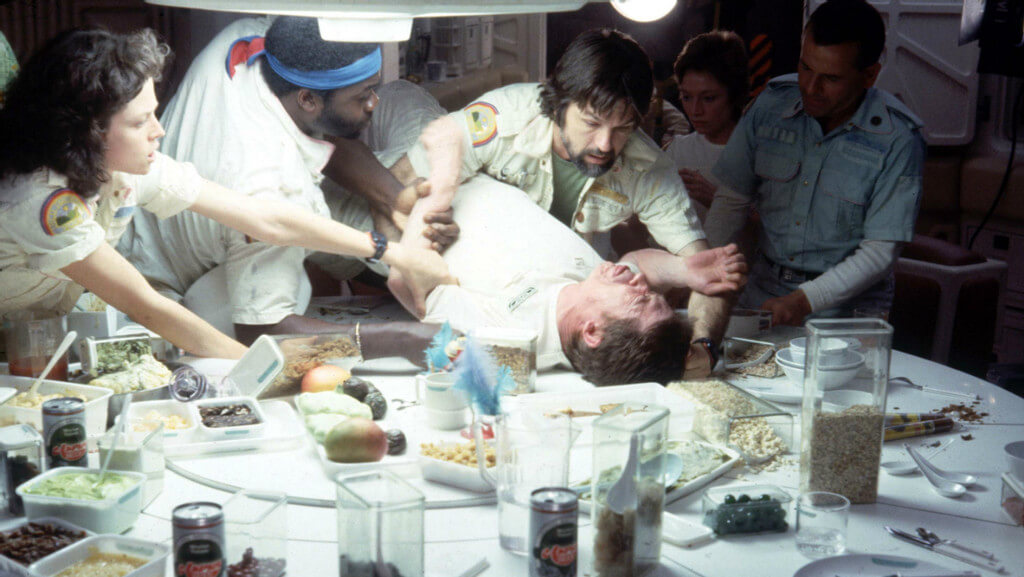 “I loved the way 2001 looked, but we didn’t want to emulate it by going high-key with a lot of overhead light coming through ceilings filled with plexiglass,” director Ridley Scott told American Cinematographer. “We wanted our lighting to be very directional and, for the sake of the mood of the story, rather low-key, gloomy, melancholy, depressing.”

That said, Alien does feature other colors. As Derek Vanlint, the film’s director of photography, told American Cinematographer magazine, Nostromo had multiple types of light.

“The governing factor in establishing a lighting style for Alien was the requirement that there be three levels of light—the ship before people came out of deep sleep, a working level of light for the ship when the ship goes bananas and all of the conventional light sources are going out,” said Vanlint. “One had to create the impression that the illumination was coming from explosions, panic lights and things like that.”

In the early scenes, there are white hues in the interiors from the ship’s fluorescent lights. This film color palette can be noticed in early scenes, as the ship’s crew goes about its daily business. It’s the most illuminated the Nostromo will ever be. As characters enter the alien horror show—or, rather, the alien horror show enters them—the colors are from lights of a ship going, as Vanlint says, “bananas.” 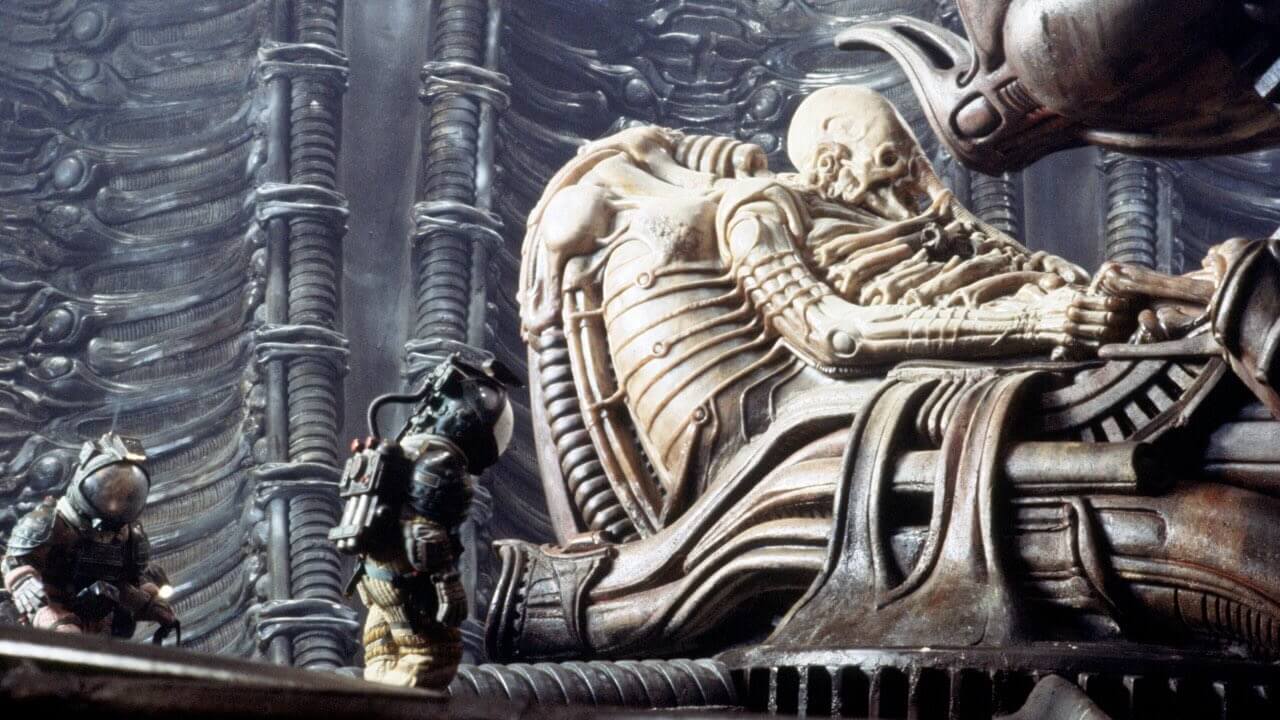 Fluorescent lights are harsh and rarely nice to look at. But in Alien, Scott’s film color palette gives these lights, embedded in the Nostromo’s interior spaces, a very cinematic and futuristic look. Through most of the movie, the color of the panic lights punctures the dark, making a malfunctioning ship more real to viewers. On the other hand, the warm light of the flame throwers illuminates faces, setting them apart from the cold, industrial machinery and the dark terror of the alien huntress.

Everything You Need to Know For Shooting a Night Scene

Music Talk: For The Bottlesnakes, Making Music is a Spiritual Experience

FCPX for Beginners: How to Import Files to Final Cut Pro