Everything You Need to Know About Aspect Ratio

Aspect ratio describes the relationship between the width and height of an image as it appears on screen
Different platforms favor different aspect ratios, so think carefully about where your work will be shown before selecting an aspect ratio
Aspect ratios can be used creatively, like Wes Anderson in The Grand Budapest Hotel

What Is Aspect Ratio?

When we talk about aspect ratio, we’re referring to the relationship between the width and height of an image as it appears on a screen.

Aspect ratio is usually written as two numbers separated by a colon, for example, 4:3 or 1.66:1. That means an image measures four units across and three high, or 1.66 units wide and 1 unit tall. Sometimes, you will notice that people don’t use the ‘:1’ when they describe an aspect ratio. They will just say 1.66 or 1.85.

Technological developments and changing trends have created a situation where there is a variety of different aspect ratios available to filmmakers. The aspect ratio you choose is going to depend on your aesthetic (or how you want your movie to look) and the platform where people will watch it.

What are all these different aspect ratios, and when did people start to use them?

The History of Different Aspect Ratios

When people use the Academy Ratio’s ‘:1’ number, sometimes it will be 1.33:1 and at others 1.37:1. Why the two different numbers? It’s to do with the arrival of sound on film. Before sound recording existed, Academy Ratio was 1.33:1, but the extra information included in movies with sound pushed it to 1.37:1. 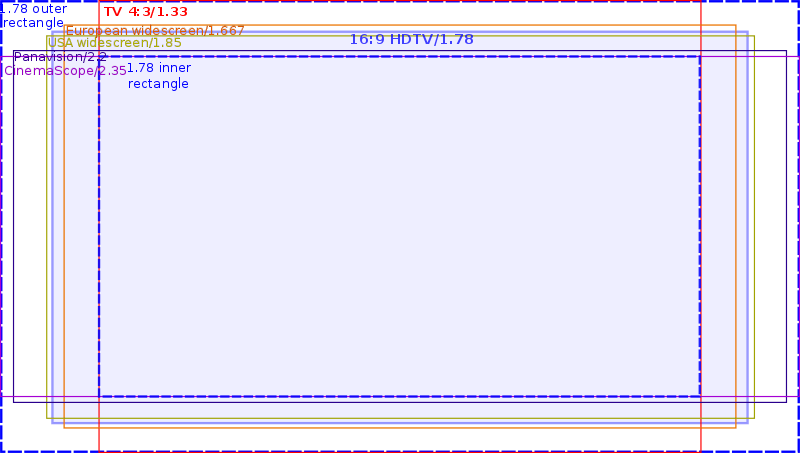 Through the 1950s, filmmakers experimented with a range of different aspect ratios. It started with a 2.59:1 Cinerama ratio, but it wasn’t very practical because it needed three cameras and three projectors to shoot and display its films. Eventually, it evolved to 2.76:1, which was used to shoot Ben Hur in 1959 on 70mm film.

CinemaScope used an anamorphic lens and screen for its 2.35:1 ratio, which was far more manageable than Cinerama and produced an immersive movie-watching experience.

Today, you are most likely to see a movie in the theater with an aspect ratio of 2.39:1, called the anamorphic widescreen format, or 1.85:1, which is ‘normal’ widescreen format. The 2.39:1 ratio is often used interchangeably with 2.35:1. The 2.35:1 aspect ratio is an older version of it; the difference is hardly noticeable.

Your TV, though, will probably have an aspect ratio of 16:9, and so will your computer screen. That’s equivalent to 1.77:1.

What happens to all those 1980s TV programs shot in 4:3, and movies made for theater release when you watch them on your home TV then? They get ‘letterboxed’ or ‘pillarboxed’. This means that black bars are added at the top and bottom of the screen (letterboxing, to make newer movies fit your TV) or left and right (pillarboxing, done to old movies and TV programs) so that you see the program in the ratio it was filmed in. It might be a little bit annoying, but it’s much better than the ‘pan and scan’ technique, which basically crops films so that they would fit the screen. You could lose almost half of every scene!

Which Aspect Ratio for Which Platform?

There’s no reason why you can’t shoot a movie in 2.39 or 1.85 for people to watch on their HD TVs or computer screens at home: it will be letterboxed and give a cinematic feel to it. The black bars will be wider for the movie shot in 2.39:1 than they will on the 1.85:1 video. However, if you want to fill the screen, then 16:9 is the best ratio. Content for YouTube or Netflix is made in 16:9 ratio.

9:16, AKA vertical video, has become a highly popular format since more than half of video content today is watched on mobile. Top brands, big-name artists, and even pro filmmakers are all producing videos in this format these days, and you can learn all the secrets behind making the perfect vertical video in a recent behind-the-scenes video we created.

Aspect ratio gives you plenty to think about, and as well as the technological side of it, you might want to think about its creative impact, too.

Putting Aspect Ratio to Creative Use

As well as considering where your audience will watch your video and how they might feel seeing it full-screen or with letterboxing (or even pillarboxing), your aspect ratio is going to have an impact on your composition. After all, a movie shot in the 2.39:1 aspect ratio is much wider than one shot in 16:9. You will want to think carefully about your storytelling and how it is going to have an impact on subject placement.

It’s worth remembering that many people are going to associate 16:9 with TV programs (including documentaries and commercials), while wider formats will make them think ‘movie,’ even subconsciously. When you choose your aspect ratio, you’re going to be communicating what type of content your audience should expect, too.

If you’ve seen Wes Anderson’s The Grand Budapest Hotel, you’ll know that he uses three different aspect ratios to signify different time periods in the film. It’s a quirky storytelling tool that you might want to think about using. And of course, you can instantly make something feel older by using 4:3.

Instead of using aspect ratio to signal different time periods, you could also use it to tell your story from different characters’ perspectives or to show that you’ve moved to a different location.

Whichever aspect ratio, or ratios, you decide to use, it’s important that you create a storyboard that matches it. This will make sure every scene is composed accurately for the audience’s view and that you are always using the right gear for the job.

How to Choose Background Music for Your Corporate Video

Essential Gear for Starting a Podcast

How to Get the Best Aerial Footage