How to Fake the Moon Landing From Home

Getting to the moon had fascinated filmmakers long before it was, if you believe NASA, landed on, from Georges Méliès’ beautiful 1902 classic A Trip to the Moon, through Ralph’s threat/promise to Alice in the Honeymooners all the way to Stanley Kubrick’s masterpiece 2001: A Space Odyssey.

And the fascination didn’t stop there. James Bond’s Moonraker, Ron Howard’s 1995 Apollo 13 and Duncan Jones’ 2009 Moon are only a few examples of the industry’s attraction to that whitish bulb in the sky.

The moon also inspired our latest Artgrid commercial. And before space diving in detail into the ad’s background and production, it’s only fitting that you watch it. See you on the other side:

As part of the moon landing campaign, Artgrid launched a space-themed footage collection and Artlist released curated music and sound effects collections that are perfect for videos about space or the moon.

Space Odyssey and the faking of the moon landing

As conspiracy theories go, one of the classic and more entertaining – certainly from a cinematic point of view – claims that the 1969 Apollo 11 moon landing was staged. It was supposedly shot in a studio and directed by none other than Stanley Kubrick. Believers go further to say that, Actually, Kubrick’s 1968’s masterpiece 2001: A Space Odyssey merely served as a research and development project into how to stage the moon landing, or maybe even a coverup to keep away attention from this secret project.

Here’s a partial list of signs that skeptics gave to supposedly prove the moon landing was faked:

Even though each “piece of evidence” could be explained, the skepticism about the moon landing’s authenticity did not wane. Some argue that after spending billions, the American government decided to shut off the moon project but needed to have a grand finale to get public support back.

Assuming the moon landing was staged, the obvious question was, who would have had the skill and know-how to create such a credible hoax?

Kubrick could pull it off

Here’s where the theory starts to get interesting for us filmmakers. According to doubters, Kubrick’s 2001: Space Odyssey was so well done that it looked more realistic than the actual NASA footage, having the “right” shadows and the astronauts’ movements. Kubrick used physical models of the planets and the space station, making it look believable.

The fact that Kubrick also had ties to NASA added to the plausibility of his involvement. One such connection was renowned science fiction writer Arthur C. Clarke, who co-wrote the screenplay for 2001: A space odyssey. Clarke’s work and NASA’s space achievements have run in parallel throughout the years, and there was mutual admiration between the space agency and the author.

There was also a cinematographic connection. Kubrick’s camera lenses to film his 1975 film Barry Lyndon – Carl Zeiss AG Planar 50mm f/0.7 – were originally commissioned by NASA to take still photos of the dark side of the moon.

Another element that amplified the theory was Kubrick’s mastery of the front projection effect, a technique used to create a background with a field depth. Originally invented for photographic use in 1955, the technique involved having the subject perform in front of a reflective surface and projecting pre-filmed footage onto it from the front with a mirror in between. Kubrick was actually one of the pioneers to apply front-screen projection in filmmaking.

Skeptics “noticed” that in the Apollo footage, the bottom of the screen is hidden in every scene where there’s space background and that the set/screen separation line can be seen, claiming that it’s proof the moon landing was filmed using front screen projection.

And here is where it gets exciting. To get more than just circumstantial evidence for his involvement in faking the moon landing, the doubters needed something that would tie everything up and make the story whole. They had to wait 11 years until Kubrick’s The Shining to get it.

The plot of The Shining has nothing to do with the moon, telling the story of a writer who comes with his wife and kid to house-sit at a hotel that’s closed for the winter in hopes of breaking through his writer’s block. Among the numerous theories surrounding the horror classic, which you can see in the excellent documentary Room 237, skeptics view it as Kubrick’s confession for being responsible for staging the moon landing through various hints and oddities.

I won’t get into all the signs hidden in the film, but one supposedly strong hint for Kubrick’s admission of guilt was that in his cinematic adaptation of Stephen King’s novel, he changed the number of “the scary room” from 217 to 237. In thousands of miles, that number is the average distance between the Earth and the moon (although it is actually 238,900 miles).

Now back to our production…

How we faked the moon landing from home

Apart from tapping into that whole ‘Kubrick staged the moon landing’ theory, the ad draws inspiration from ‘Mad Men’ with the scene where the creative/marketing team is trying to come up with the best way to fake the moon landing. Failing to come up with a good enough idea, they turn to Stanley (Kubrick), who presents the ultimate solution – using Artlist’s stock footage.

After the script was ready, we put together a treatment containing a storyboard with many references to the look we wanted for this ad. This was critical, especially since we worked remotely with an external production company in a different county. We had to communicate each and every detail in the best way possible.

The first slide of the treatment was an animatic storyboard, a key component in most of our pre-productions. It gives a pretty accurate visualization of how the final video should look. When everyone is on the same page in that regard, it makes your work much easier.

In this specific project, we actually created a storyboard in two stages. The first was sort of a rough draft meant to deliver the ad’s overall look and feel to the New York production team. They then did an initial location scouting according to that rough draft and sent us a few options for each set. Our director and producer then went on a remote recce with the NY crew via their phones to determine the chosen locations’ suitability. After we settled on the locations, we created a much more detailed and accurate version. 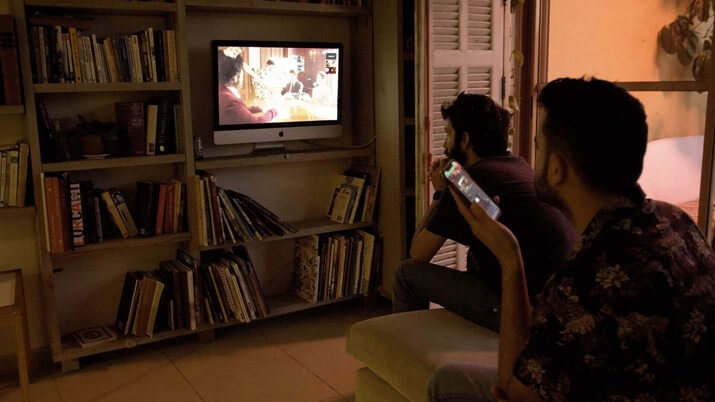 This might seem obvious, but I’ll say it anyway; when you do pre-production remotely, a crucial element for making sure everything is ready for the shooting day is having good communication between the teams in the different locations.

The rest of the treatment detailed how we wanted the actors, wardrobe, locations and art pieces to look like. Since the whole thing needed to have a 1960’s look, we made sure to include many relevant references. Our main set was the office, where the team brainstorms how to fake the moon landing. We looked for one of those old, classic spaces that consist of wooden walls, heavy cabinets, warm tones and maybe a touch of green or blue elements.

Our art direction references included all the layers needed to create the 1960s look, including wardrobe, table props, wall paintings, lamps, furniture and even old storyboards and space miniatures.

And if you’ve been following us for a while, you might know that one of our hobbies is placing Easter eggs into our commercials. Usually, they refer to our album art, which we are very proud of, but the two hints we hid here reference Stanley Kubrick’s films. One is the glass of milk, which is the favored drink of Alex from A Clockwork Orange. The second is the red eye, a reference to Hal the supercomputer in 2001: A Space Odyssey. 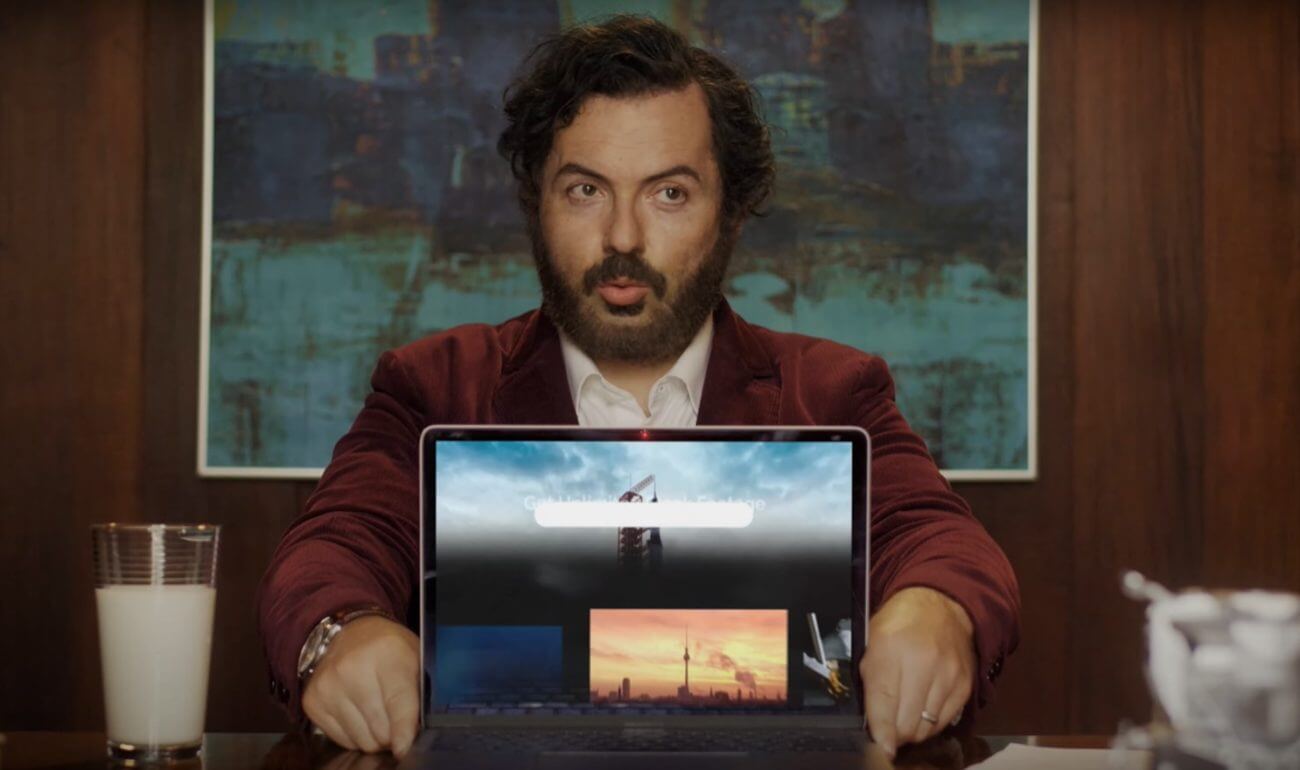 Our treatment also included casting references for the 4 characters that appear in the office scene. The candidates sent us a video audition, and we mixed and matched them in an edit to find the best fit.

One casting choice that had to be perfect was the Kubrick look alike. We went through almost the entire actors’ list on backstage.com – a website where you can cast actors for your projects based on location – until we found the right guy. Our initial choice was located in Israel, but due to the COVID-19 situation, we couldn’t fly him to New York.

We considered two options; either to shoot him in front of a green screen and merge it in post-production, or use deep fake technology like we did in our “Forever” production. Neither choice was optimal in our view, and luckily, a week before filming started, we came across our perfect Stanley on backstage.com. He was located in New York, which spared us from doing tons of post-production work.

To enhance the physical traits that are unique to Kubrick, like the shape of his beard and eyebrows, we brought in a special effects makeup artist. Actually, when we saw the last shot where Stanley looks at his creation on the TV screen, there was a moment where we believed that it was actually him, and it gave us goosebumps.

The second set featured the classic all-American family watching the historical event on TV in their living room. To emphasize the importance of this occasion, the scene is happening at night, which implies that the whole family is staying up late just for that. The kids are dressed in Pajamas, and the young boy is also wearing an Astronaut helmet, which shows the excitement and anticipation for this iconic event.

One small step for stock

All the footage of the rocket launch, spaceship and moon landing was completely made with CGI.

The office and living room scenes were pretty simple to shoot on a technical level. We filmed most of the ad with a Panasonic Varicam on a Dana Dolly and for our lighting setup, we used an Arri SkyPannel and a few Aputure lights.

On the day of the shoot, our Israel-based director and producer gave directions and monitored everything from home. They watched the action unfold in New York from afar, a bit like how NASA’s mission control center operated the (supposedly) real moon landing.

When directing a project remotely, there are a few things we recommend you have: The most basic is, of course, live feed from the camera. You need to see exactly how the frame looks in each take or scene. If your film has dialog, make sure you also have a good audio signal.

Another helpful element is having a second camera with a wider angle that shows the whole set and gives you a complete view of everything happening on the set. You should also consider having a designated person on set whose only job is to communicate your instructions to the production crew.

Other things to keep in mind are ensuring you have fast internet speed and a quiet location to work from where you can focus on what’s happening on the set. Directing via a remote monitor can get frustrating and tiring after a few hours, and it’s very different than being on set with everyone. Make sure you take the necessary breaks to stay fresh and have everything you need to stay focused.

You Asked, We Listened: New Direct Download Feature & Much More

Music Talk: How Wes Writer’s Collaboration With Artlist Led to His Streaming Success