Music has been going through a process of democratization in the past two decades. You can view it as a technology-enabled tug of war, where the power has gradually shifted from major record label executives to the consuming masses.

The Start of Digital Music Piracy 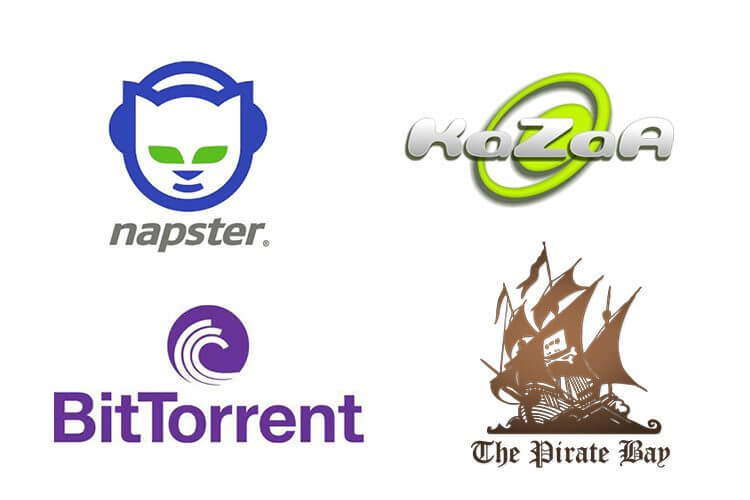 The first time consumers pulled the power towards them was in 1999 when file-sharing technology became a possibility, giving birth to Napster, the first peer-to-peer file-sharing platform. That’s when people started consuming music for free. Once the public tasted free music, they wanted more, and more and more.

The demand was established early, and it came to stay. After the court forced Napster to close, KaZaa jumped in the ring, followed by BitTorrent, Pirate Bay and many others. Lawsuits were flying everywhere, but it was just a game of legal Whack-a-Mole. The prospect of rolling things back to their previous state started to dim.

How Streaming Changed Everything

File-sharing made way for streaming technology, representing the second big pull for consumers. In 2005 the market was reshaped yet again when a site called YouTube entered the playing field. It gave the ability to listen to a song on demand without paying for it or owning it.

Although they tried to resist at first, the industry soon realized it was futile. So instead, they took the ‘if you can’t beat ‘em, join ‘em’ approach by hopping on the streaming trend. In 2008, Google bought YouTube and implemented its advertising business model, which essentially takes money from advertisers and gives a return to video creators according to their popularity. Major labels soon began releasing official music videos on YouTube so they could monetize their channel them. At the same time, services like iTunes started selling digital music by the song and cheaply.

The next pull was the subscription-based model. Companies like Spotify, Apple Music and Deezer started offering an all-you-can-listen-to buffet of music for a very low monthly fee.

A New Way for Musicians to Get Paid

At this stage, consumers were still getting music for free, or practically free, and the industry found a way to get paid. Everybody happy? Not quite.

Being at the bottom of the business chain but having their livelihood dependent on consumers, musicians were the main casualties of the new monetization game. After all, it practically cut off one of their primary sources of income – CD sales. The money they saw from digital music didn’t come close to what they were getting in the pre-digital age.

But there was also opportunity. Streaming allowed musicians to deliver their music straight to consumers without going through big labels.

“It used to be a very closed system,” explains Artlist musician Katrina Stone. “And you could not get in unless you had the backing of a major label,” she recalls. “Technology has removed a lot of barriers that existed before,” adds soundtrack composer Ian Locke. That’s how we the consumers got amazing artists like Lana Del Rey and Billie Eilish.

Of course, things are not that ideal, and corporations still have a big say in whose music gets heard while reaping most of the profits.

On a parallel timeline of the democratization of music emerged a new industry. The dramatic drop in the cost of video production, which resulted in the influx of video creators, created a growing demand for music in their videos.

Starting as a pay-per-song model, most indie filmmakers found music licensing out of their reach. Among those filmmakers was Artlist founder Ira Belsky. He, along with three of his friends, decided to combine the growing need for music for videos with the successful subscription-based model of companies like Adobe and Spotify. As Belsky explains, “As filmmakers, we saw a gap in the film industry between the low-quality stock music that is just made for making money and the high-quality music that comes at a price.” Ian Locke agrees, “There’s a huge demand for music out there. What they’ve done is they’ve connected the two in a really affordable way.”

Artlist subscribers get access to its entire music catalog for a year with unlimited downloads. To top it off, projects that feature music downloaded under a paid subscription are covered in perpetuity.

Acknowledging that you can’t get quality music without adequately compensating the artists, Artlist created a whole new source of income for independent musicians.

“I think that the music licensing model, especially the subscription-based model is genius,” states composer Kevin Graham. “It gives filmmakers a resource for a very affordable price, and it allows composers and artists and musicians to make money with their music in ways that they wouldn’t otherwise be able to do. If I can find a way to take care of myself and take care of my family doing what I love, then I’ve found success,” he concludes. “To see the return that my music did get,” adds Ian Locke. “I would have had to play so many shows to be able to make even a fraction of this.”

Artlist also empowers musicians by giving them a new way for their music to gain exposure. “I think sites like Artlist have created a platform for independent artists who don’t necessarily fit into the commercial radio scene or the commercial pop scene,” admits Locke. “There are so many creators out there,” reveals Katrina Stone, “that are licensing them and emailing me saying ‘I’ve put this song in my video, and I just love it”, and it’s so exciting to build new fans that way.”

Public Domain Music – What Is It and Should You Use It?

TikTok Stickers: What Are They & How to Add Them to Your Videos