The 180º rule governs where your cameras will be placed
Keeping the camera on one side of an imaginary line when two characters interact in a scene helps the audience keep track of the story
‘Crossing the line’ can be done, but it must be very carefully managed

The 180º rule–not to be confused with 180º shutter angle, and sometimes called just the 180-rule–is there to help you with your camera placement when you have two or more characters interacting in a scene. It was devised to maintain consistent eyelines, which helps your story flow and your audience keep track of who is talking.

When you have two or more characters interacting in a scene or a character interacting with a specific object, their left-right relationship or the direction they face to talk to each other should remain consistent. This consistency is vital for your audience as it helps them in following the story and knowing which character is speaking. If Character B was looking at Character A from camera-left, but the direction suddenly changes, and Character B then looks at Character A from camera-right, it’s confusing and can break the spell of your story-telling.

The 180-rule is there to ensure that your characters maintain consistent eyelines in a scene, which helps your story flow and your audience remain immersed in the narrative and not lose track of things. 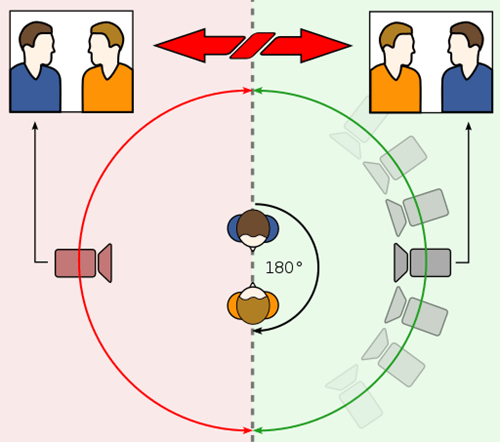 The 180-rule is an imaginary eyeline that runs between the characters in your scene. Your camera should not cross this line.

By staying on one side of the line, you will maintain consistent lines of sight between your characters and consistent storytelling for your audience. Or, if you have a character looking at a specific object in the scene, the audience can be sure it’s the same item and that the character hasn’t suddenly changed their focus.

With more than two people in a scene, there will be multiple lines of sight that can function as the 180-line. The easiest way to handle this scenario is to imagine that your characters are standing on stage in a theater. After the establishing shot that sets the scene, the camera can be anywhere in the audience, and with the characters on the stage, the spatial relationship between them won’t change. Of course, if any of the characters were to move across the scene, then things change, but we’ll get to that. Ensuring that you block your scenes and always know precisely where everyone should be positioned will help you maintain consistent eyelines.

Characters are not going to remain static in every scene you shoot. What do you do if one of the characters moving across the scene, switching the entire left-right relationship? You show it. There are plenty of options for this. You can cut away and then shoot a new establishing shot. You can follow the character as they move across the scene and assume the new left-right relationship. Or you can pull out a bit and show all of the transition.

When shooting scenes with characters in motion – whether walking, running, cycling or in a vehicle – you need to be consistent with the direction they move. Going from left to right and then suddenly right to left makes it feel like they are going back to where they started, which is inconsistent and confusing. (Although maybe they do have to go back, in which case, that’s great.) You want to keep your tracking shot going in one direction. If you do need to change the left-right relationship, the best way to do that is with an arc or Steadicam shot where crossing the line is a part of the action.

There are times when you might want or need to bend the 180-rule. Knowing why the rule exists means that you can begin to shift the camera in a way that makes sense for your story and your audience.

We’ve already encountered two of the means to bend the 180-rule. The first is to cut away from your established scene and then return to it, resetting your 180 line. The second is to film an uninterrupted shot as you move the camera across the line. By taking the audience with you as you move the camera, they have the opportunity to follow the new eyelines, which avoids confusion. If you need to signal a steady shift in a character’s understanding of a situation or a change of heart or opinion, this is an effective means of achieving it.

You can also bend the 180-rule by shooting a neutral shot that’s directly on the line. This way, it’s neither one side nor the other. This is great for maintaining a sense of ambivalence to a scene.

Breaking the 180-rule is something that you should do only rarely and with thought and care. It’s very effective when you want to suggest chaos, confusion, or a very sudden and intense change of personality or opinion. Crossing the line signifies disorientation and stimulates it in your audience; that’s how to use it.

Whatever you do, if you’re going to break the rules, make sure you know and understand them properly. This is particularly true with the 180-rule. It’s a rule that’s there to strengthen your filmmaking. When you break it, it makes a powerful statement, so you need to be sure of what you’re doing.