Strings, Synths, Theremin and Guitars are instruments often used by horror movie filmmakers
Common sound effects for horror are breathing, footsteps, monster vocalizations, ghosts and stabbings, all found on the Artlist SFX catalog
Foley sounds, sampling, sonic texture experiments and use of negative space are techniques you can use to build tension and make your films scarier

And you can find the perfect sounds for your next horror project in our curated Halloween SFX collection.

Before we get into the sound effects and musical production frequently found in horror films, let’s take a minute to define the 2 categories of sound we hear in this (and any) type of cinema.

First, there is diegetic sound. These are the sounds that emanate from the world of the film. These would be things like screams, knocking doors, ghost sound effects, flesh being wounded, whispers and so on. Non-diegetic, on the other hand, is placed there by the filmmakers in post-production and can include sounds like music, foley sounds and other designed sounds.

Sometimes, diegetic and non-diegetic sounds blend together in fantastic ways, especially in horror cinema. Sometimes you can’t even tell the difference.

Take the iconic “ch ch ch ha ha ha” whisper sound (actually “ki ki ki ma ma ma”) from Friday the 13th, for example. While it sounds like Jason whispering as he stalks his teenage prey, the sound is actually the work of the film’s composer Harry Manfredini.

To make the unnerving sound, Manfredini whispered “ki” and “ma” into a microphone, which he routed into an Echoplex machine, a magnetic tape delay effect heard on some of the best music of the last 60 years. The Echoplex’s delay created a reverberation that distorted the “ki” and “ma,” which might explain why viewers have always heard the whisper as “ch ch ch ha ha ha.”

While there are no hard rules on which musical instruments to use when scoring horror movies, there are certainly some that have come to be identified with the genre.

Early horror films used instruments found in classical music. This is no surprise given Hollywood’s use of orchestras to score films with neo-classical music or other orchestral scores of the early-to-mid 20th century.

Over the years, other filmmakers introduced more variety to the horror film sound palette.

One filmmaker who flipped this on its head was Alfred Hitchcock. In the horror movie Psycho, the score is known for many stabbing staccato and arpeggio strings. The stabbing staccato sounds, of course, reach their absolute peak during the iconic shower murder scene.

Stringed instruments are often beautiful in traditional orchestral music. But in horror films, these instruments create all sorts of tension and can even be atonal for a completely different effect to movies.

In the 1950s, the Theremin, a type of proto-synthesizer, became popular as a musical instrument and sound design element in science-fiction-horror films. While it doesn’t have the chromatic depth of a piano or synthesizer, the Theremin is great at creating dissonant and atonal sounds—perfect for horror films.

With the 1970s and 1980s horror films, especially of the sci-fi horror variety, the synthesizer came into its own. Filmmaker John Carpenter, for instance, scored his own films with synthesizers, like in the movies Halloween and The Thing. Likewise, in zombie films, synthesizers are ever-present.

More recently, the TV show Stranger Things really resurrected the use of synthesizers in horror cinema. Yes, it was heavily influenced by 1980s sci-fi horror soundtracks, but it’s a prime example of how synths sound great in horror films.

While not as common as synths, guitar run-through effects are an excellent choice for horror films. The Italian band Goblin, for instance, created a guitar-centric score for Dario Argento’s horror classic Suspiria. Trippy and unsettling, it perfectly matches Argento’s psychedelic horror film.

The 1994 gothic horror film The Crow is another example of a movie with great songs that feature guitar (and synths). If you watch any Rob Zombie film, you’ll hear a lot of guitars, which makes sense since he was a founding member of the 1990s industrial metal band White Zombie.

With horror cinema, there are a number of scary sound effects that can be heard over and over again.

We mentioned the “ch ch ch ha ha ha” sound from Friday the 13th above, but breathing sound effects are one of many essential horror audio tracks. But filmmakers can play with all sorts of breathing to unnerve audiences.

If a character has been running but stops to hide, their heavy breathing might just give them away to their pursuer. Similarly, when a character is dying, the actor and even the sound designer can really play with how their breathing changes from second to second.

In a monster horror film, the creature’s breathing will be an absolutely essential ingredient. Sound designers can also play with other non-speaking vocalizations, like roars, hisses (think Ridley Scott’s Alien) or calls to other monsters.

Nothing creates tension and terror quite like the footsteps of a killer or creature pursuing its victim. Sound designers can play with the volume and character of footsteps, and by adding reverb, delay and other effects to the audio mix, these footfalls can take on much more sonic complexity.

Ghost sound effects can vary from whooshing sounds and a strange ambiance to abstract or indistinct vocalizations. Horror sound designers will typically heavily process sound to give the ghost sound effects an otherworldly vibe.

What would any horror film be if it didn’t have a wealth of sounds for stabbing, slashing, impaling, and other mortal flesh wounds. You know, the sounds of gore. Enough said.

We’ve talked about the sound effects and musical instruments commonly found in horror films, but let’s take a moment to discuss some sound design techniques or strategies. These are things you will want to know about if you plan to make a horror film, or any film for that matter. 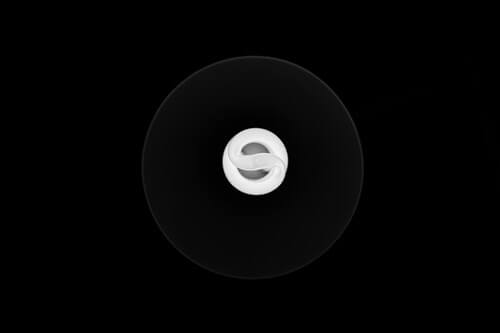 In the last few decades, the trend has obviously been to fill almost every moment of screen time with sounds like gunshots, explosions, yelling, crashing, grunting, talking and so on. But there is a lot to be said about creating space between sounds. This is what’s called negative space.

Many horror filmmakers are really good at allowing negative space to create tension and terror. Again, Ridley Scott’s Alien is an excellent example of this: the film isn’t completely full of sounds. Instead, there is negative space in moments when characters are hiding, moving quietly and so on.

Don’t limit yourself to traditional horror film instruments and sound effects. Instead, create sounds or warp existing sounds to create strange and new sonic textures. This will give your horror film some uniqueness that will set its sound design apart.

A great way to experiment with sonic textures is by using samplers and synthesizers. These can be hardware or software samplers or synths. Either way, if you experiment with these electronic instruments, you’ll quickly find that you can make all sorts of sounds with them.

Samplers, in particular, are incredibly powerful and versatile tools that allow you to load sounds into them and then affect them in all sorts of ways, including with synthesis engines.

If you’re not confident or skilled at creating sounds yourself, then you can either hire a foley artist or look on Artlist for foley sounds. Foley artists are sound designers who use all manner of tools and materials to create sounds for filmmakers in a recording studio.

As you now realize, horror cinema is great not just because of on-screen visuals and the off-screen unknown. The best horror films are made great in large part because of great sound effects, sound design, and musical scores.

If you’re making a horror film, play with diegetic and non-diegetic sounds. Also, explore the world of royalty-free sound effects and music, listening carefully to the sounds that you can either use as-is or manipulate in the most frightful ways!

How to Create Better Videos With Your Smartphone

3 Myths About Video SEO You Need to Know