Sometimes, all you need is one “breakthrough” video on YouTube. Julie Nolke experienced this with her excellent “Explaining the Pandemic to My Past Self.
The video went viral, exposing millions of viewers to the rest of her channel. She’s gone on to become one of YouTube’s funniest comedians
Closing in on 1 million subscribers, we’re taking a look at why and how she’s been able to make her channel such a success

Throughout the early days of the Covid-19 pandemic with people locked away indoors still being a relatively new and novel idea, there was a shared, collective experience to be found in watching viral content such as Tiger King on Netflix and participating in the addictive game “Among Us.”

Among the ever-growing list of viral hits that everyone was sharing and talking about, Julie Nolke’s “Explaining the Pandemic to My Past Self” really struck a chord. Practically overnight, her channel skyrocketed in terms of views and subscribers. Since then, she’s gone from strength to strength, earning her place among the elite of YouTube comedians. Just in case you somehow missed that video, have a watch:

Julie was born in Calgary, Canada. She’s an actress, comedian, writer, and everything in between. She regularly posts witty, original comedy sketches alongside vlogs and other short videos to her YouTube channel. Alongside her wildly popular viral-hit series “Explaining the Pandemic to My Past Self,” Julie’s videos look to make light of current trends and news and showcase her excellent writing skills. In addition, she’s sharing her own unique voice and take on the world – something that’s clearly resonated with her audience of nearly 1 million subscribers.

Here’s what her channel description says: 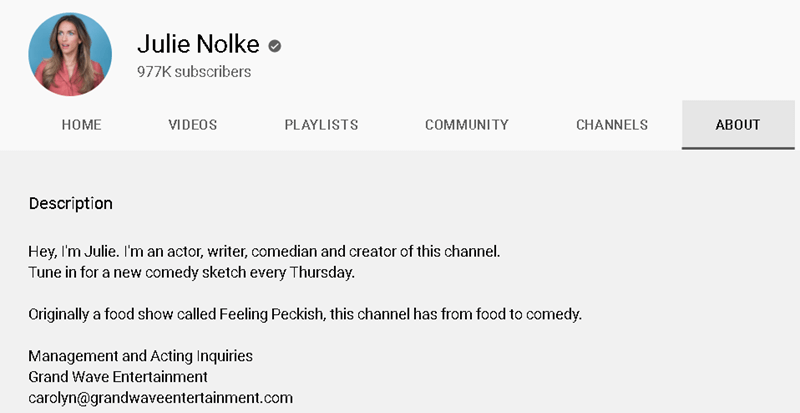 Let’s dive in and take a look at what it is that’s made Julie such a success!

One of the key ways to grow a YouTube channel is to create content around current trends and relevant news stories. Julie is a great case study for this theory. Her video “Explaining the Pandemic to My Past Self” was an instant viral hit that helped propel her channel into the spotlight. At that moment in time, pretty much the entire global community was locked inside, spending time on platforms such as YouTube. This satirical take on what going back to warn your past self about what was coming really tapped into the feeling of that moment – how the world drastically changed in such a short time.

As she mentions in her Macleans Interview, “On a global scale, everybody’s mind was in the same place. Everybody was at home, everybody was a little scared. So it was just the slightest bit of reprieve that was also incredibly relatable.”

Julie has always been funny. Her extensive back catalog of videos before the viral one proves that. Since that viral hit, those videos then went on to see hundreds of thousands of views themselves, as people started to discover her content. But sometimes, you just need that one video to really kickstart things. You need to be in the right place at the right time, and Julie nailed it.

Once she had the “gateway” video to her channel, people who had watched her pandemic videos went on to watch plenty of her other work, which was equally as good. Suddenly, her subscriber numbers were skyrocketing. You can draw parallels to what happened to Sarah Cooper, who rose to stardom thanks to her Trump lip-syncing videos.

While getting your YouTube descriptions, thumbnails and timing right is essential, when it comes to doing comedy on YouTube, you also have to be talented, right? You have to be funny and “good on camera” – there’s no escaping that. And Julie is hugely talented.

At heart, she’s an actress. Originally, she started her channel to prepare and be “ready for my “big break,” she tells the Videomaker podcast. “It kind of evolved over the years, but it definitely started as just a place to get in front of the camera and sharpen my tools so I could be ready for the traditional TV and film industry.”

The way Julie appears to effortlessly “talk” to herself in multiple sketches is brilliant. You have to be a ridiculously good actress to nail this and make it feel so real. It’s one of the many great skill sets she’s exhibited on camera and something that makes her really stand out. Her “Eulogy for person who was electrocuted” video is just one of many examples of this. Can you imagine how much time and planning it takes to set up and shoot all of these different characters?

Another thing that’s made Julie’s YouTube channel such a success is that she’s sharing her own unique voice.

“What I really wanted to do was make content that was from a female perspective but wasn’t specifically for females. So I wanted to be able to talk about life from the lens of being a millennial female but have it resonate with a wider audience.”

It’s no secret that the comedy scene is a male-dominated industry, and it can be really tough for women to “make it,” especially with aged, sexist remarks along the lines of “women aren’t funny.”

“I want to debunk this idea that women aren’t funny. I think you can not only be a funny woman, but you can talk about things from a woman’s perspective and have it be funny. That’s the main mantra of the channel.”

Having creators as talented as Julie regularly uploading to YouTube is something we shouldn’t take for granted. The platform needs more women like her to be sharing their own unique perspectives. YouTube is a better place for it!

So, have you subscribed? Ever since the pandemic began, Julie has been going from strength to strength. She extended her video series “explaining the pandemic to my past self” and regularly posts brand new, original and unique sketches that garner hundreds of thousands of views.

For all extents and purposes, Julie is a direct rival to the likes of SNL and other well-known North American comedy sketch productions. She recently shared her sadly unsuccessful SNL audition tape, but we’re sure good things lie ahead for this talented comedian. Julie’s forging her own way as one of the leading lights of comedy on YouTube, and very soon, she’ll be sailing past that impressive milestone of 1 million subscribers. We can’t wait to see where her journey takes her.

Get the Best Gym Sound Effects to Supercharge your Videos