How to Build a Concept for an Ad Around a Song

Recently, we discussed how to choose the right song for your commercial and also went into detail on how to edit a song to fit your video perfectly. In this post, you’ll learn how to build a concept for an ad around a song, matching its lyrics and mood to your message, visuals and brand. Also, we’ll discuss lighting, color palette and the advantage of shooting two setups of a scene separately and then compositing them in post.

First, watch the ‘Freedom to Create’ commercial, and then we’ll dive in and explain how we did it.

This ad brings to the forefront the musicians who make part of the Artlist Original label, and they appear in the video as the band coming up behind the editor when she clicks the song.

Every aspect of the song – titled Freedom – was done in-house and specifically for this commercial. It was written by the creative team, composed, produced, arranged and mixed by Assaf Ayalon and Peter Spacey, with vocals by soul singer Roy Young and eccentric pop diva Ofrin.

Wanting to convey the value of ‘Freedom’ – the freedom to create and to express yourself – the song needed to have the same kind of energy – upbeat, carefree, funky and happy.

When you use a song that has lyrics, it’s important to make sure they match the visuals and the mood of your ad concept. For example. We chose the verse ‘so fresh so new’ to represent the new music that is added daily to the Artlist catalog, and ‘it’s all for you,’ is about how Artlist is centered around you, the user.

Here’s a tip for anyone working with musicians (or any non-actor, for that matter): Take the time and effort to make them as comfortable as possible to get the reaction you need from them. In this case, it would be to bring live-performance energy to the set. That could mean dancing or going wild as if you’re part of the crowd or bringing big speakers to recreate the atmosphere of a stage. Talk to the musicians before shooting and learn what would make them feel most comfortable.

To create the effect of the band coming up the window, we shot the ad in a green screen studio. We actually built a set wall with a window that divided the studio into two sections – the editor’s room, and the outside where the band appears. 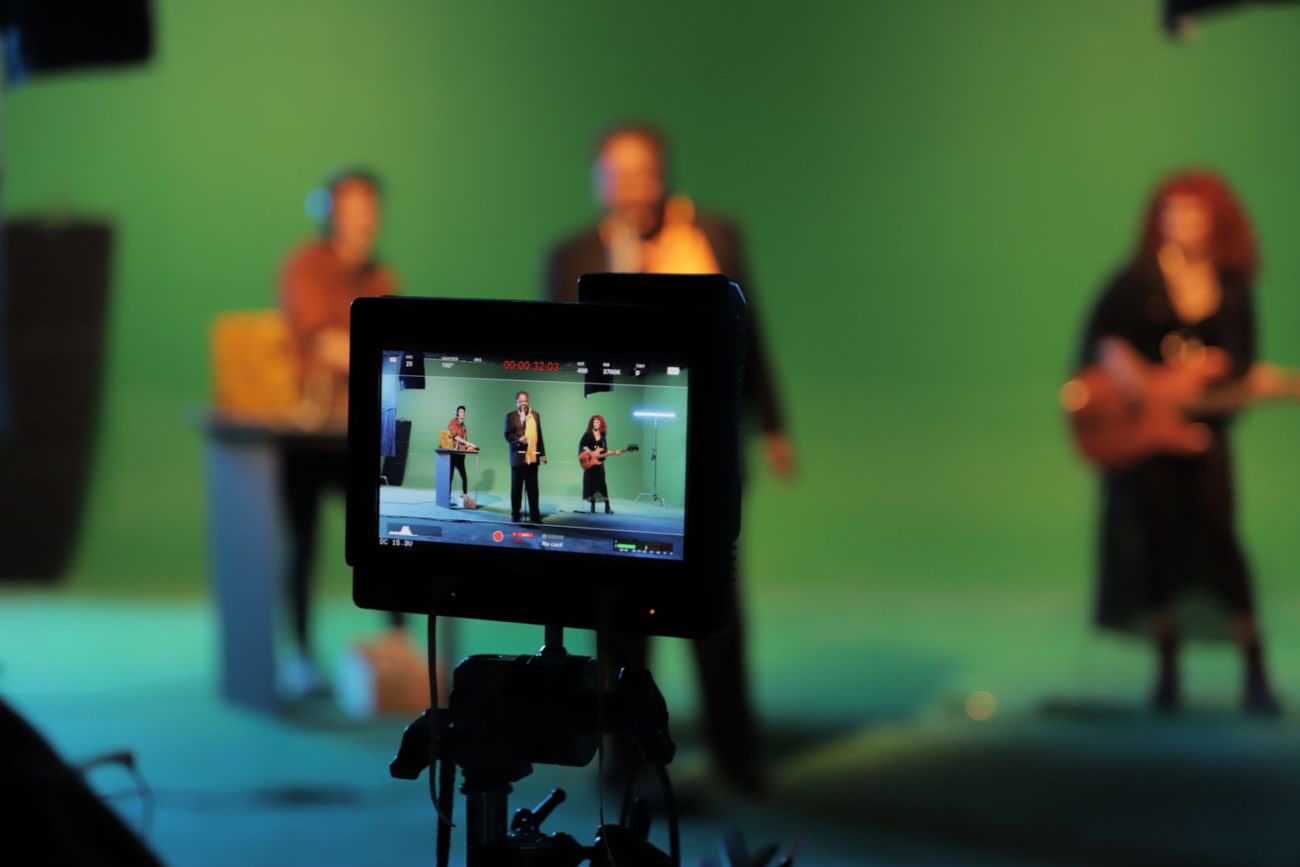 We chose to use real glass on the window to get realistic reflections. The downside of doing that is that it can create some problems with keying out the green screen. Another option is to shoot it without the glass and add the reflections in post-production. It makes it easier for keying but can take away from the realism of the scene.

A very significant decision that we made was to shoot the two set-ups separately and then composite them together in post. The first half of the day was dedicated to shooting only the editor and in the second half, we shot the band with a green screen.

That allowed us to really focus on each scene separately and gave us the flexibility of choosing the best take out of each.

In editing, we keyed out the green screen and composited the band in the window together with a 3D city that we built in Cinema 4D. We also added reflections, shadows, textures and lens flares to add realism to the scene. 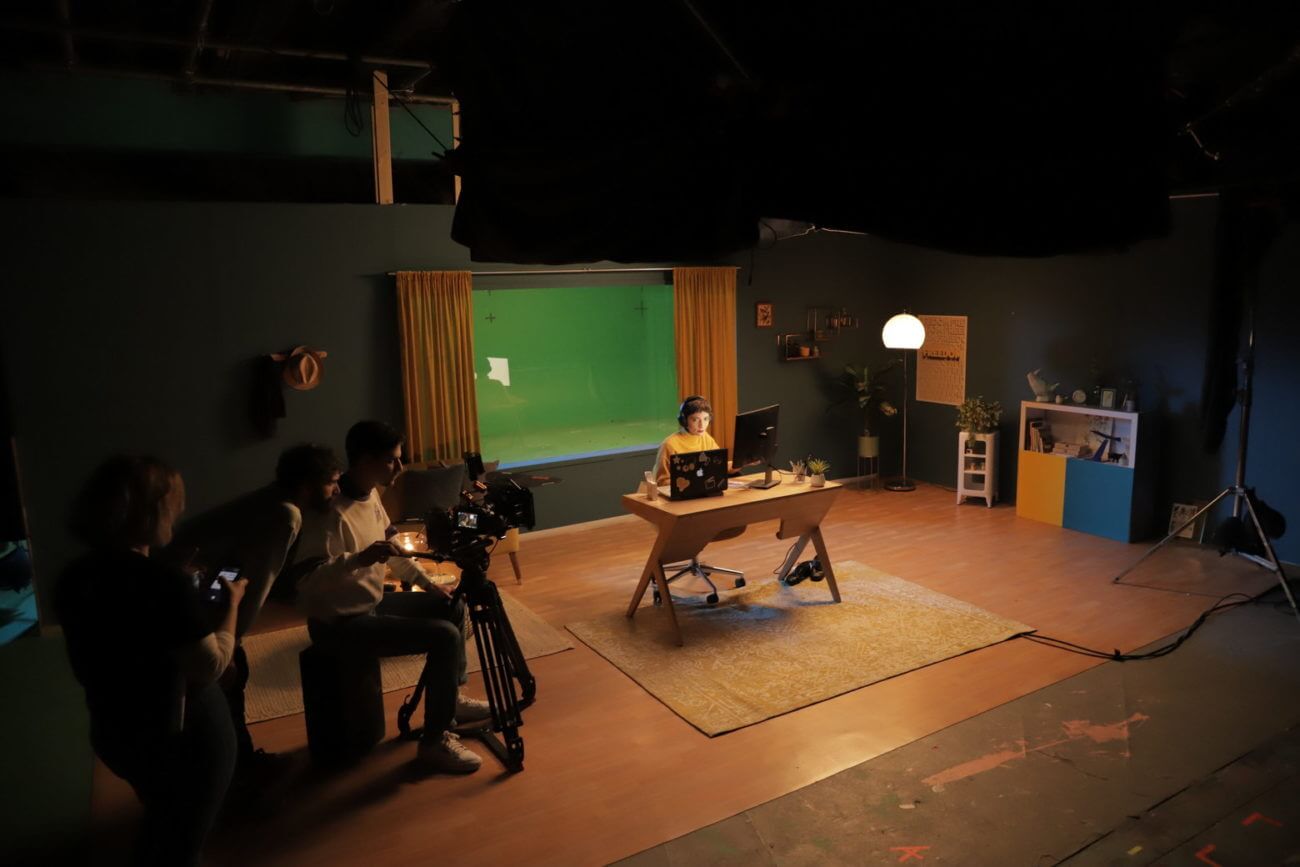 When it comes to choosing the color palette of your video, try using colors that reflect your brand. It will make your videos and your brand more recognizable.

In this production, we went with yellow, which is the Artlist color. The curtains, the couch, the chair, and even the actress’s clothes are all yellow. We also used some blues and greens to get a nice color contrast.

In the editor’s room, we hung two LED panels on the ceiling for the fill light and used a big diffuser with a black skirt to focus the light and control the light spill.

For the key light, we used a white background on the PC monitor that projected soft light onto our subject’s face. For the backlight, we set the Arri Skypanel to blue and placed a diffuser in front of it to simulate moonlight and match the night-time city look.

We also placed an Astera tube set on Tungsten for the hair light to match the practical lights on the set. In the green screen studio, we simply hung two Lantern lights from the ceiling to give us even lighting for an easy key.

To get excellent tips about working with a green screen and understand why it’s critical to have even lighting, go to our post about green screen dos and don’ts.

When you create an ad concept, every aspect needs to relate to the brand you’re promoting. Whether it’s the music, the lyrics or the colors of the video, everything needs to match. When shooting your video, choose ways that will give you the most flexibility possible. Until next time, stay creative!

Get the Best Royalty-Free Music for Commercials in 2022