Breaking Down the Stranger Things Phenomenon

The fact that Burger King recently released a Stranger Things-themed burger for the show’s third season is enough to demonstrate how big the Netflix show has become. But why did a teen horror-fantasy show set in the 80’s get to be the most talked-about phenomenon not called Game of Thrones? After all, the ’80s have been around us for a while.

’80s music started being popular during the 2000s with retro acts like Daft Punk, Bat for Lashes, Florence + the Machine, Jessie Ware and others. That trend evolved, and today, most pop songs contain some sort of element from the ’80s. After two decades of more reserved music, where the grandeur of the ’80s was met with disdain and cynicism, the 2010s saw musicians breaking through this inhibition and embrace the pathos and naivete of that era. 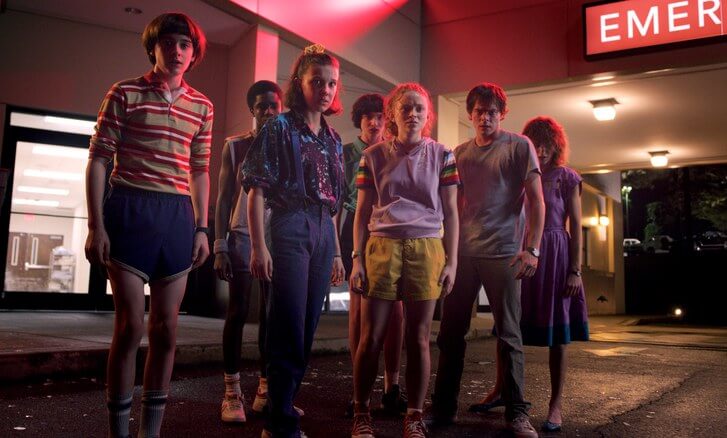 The same goes for fashion. After being maligned through most of the ’90s for being too much, the ’80s retro-chic came back with a vengeance in the 21st century. Today, high leg neon leotards, big sunglasses, even leg warmers, are all very sought after vintage clothes.

It seems that ST has brought us to peak ‘80s, and in 2016, the show’s two editors tried to give their take on it on the Go Creative Podcast. Today, 3 seasons into the show, seems like a good opportunity to reopen the issue. So, let’s break down why this teen horror series made such a massive impact on audiences of all ages.

The ST soundtrack gave something to every ’80s music fan. You had your pop hits, like The Bangles’ ‘Hazy Shade of Winter’, Cyndi Lauper’s ‘Time After Time’ and Toto’s ‘Africa’, your stadium rock songs like Bon Jovi’s ‘Runaway’ and Scorpions’ ‘Like a Hurricane’. You also have some darker post-punk classics like Joy Division’s ‘Atmosphere’ and Echo & the Bunnymen’s ‘Nocturnal Me’. It gave everybody at least a couple of songs that brought them back to their childhood, whether you were a jock, a rocker or goth.

Check out our own Stranger Things-inspired collection here.

As for the original score, composers Kyle Dixon and Michael Stein of the band Survive were making horror-inspired synth-heavy music even before working on the show. They brought their retro ’80s sound to perfection with a score that is at the same time fresh, scary and yet familiar.

One of the most significant achievements of ST is the meticulous recreation of the era. Even though the creators of the show, brothers Matt and Ross Duffer, were born in 1984, they surely did their homework on the decade and the movies that defined it. If it’s the clothes, the music and even the small details of how people talked and carried themselves, ST has an authentic ’80s feel, which is impressive. And while the style of the show went from horror to more of a fantasy-adventure as the show progressed, the attention to detail hasn’t diminished.

This is what tied it all together and turned ST to the it-show of today. The creators did not settle for recreating the decade or drawing inspiration from such early ’80s classics like The Goonies, E.T., Stand By Me and many others. Instead, they sprayed their show with countless homages and easter eggs to those iconic films, evoking a sense of nostalgia in those who either grew up during the decade or grew up watching its movies. Nostalgia is a powerful thing, and in this reference-filled era, taking audiences back to some of the most popular movies of all-time, brought more and more people to watch it and talk about it.

Stranger Things has become the pop icon that it is today thanks to smart use of music, a detailed recreation and the many hidden ’80s movie references, but it’s still uncertain whether that status will hold before and after the fourth season.

In the meanwhile, we at Artlist made our own Stranger Things homage with a collection full of synth-heavy ’80s-inspired license-free music that will give your own videos that trendy sound. Check it out here and remember to stay creative.

Artlist Mood of the Month: Mysterious

It’s World Music Day: Here Are the Top Trends of Music in Video for 2021

The Creator Economy Explained: Why You Should Get In on It and How to Do It