This is one of the most significant updates Blackmagic Design has released to date, packed with new features that promise to upgrade and improve the already brilliant Blackmagic software
While the RGB histogram, color channel clipping and false-color guide are very welcome fixes, the autofocus update is somewhat disappointing
Other updates include support for Generation 5 color science, LCD screen dimming option and Q1 and Q3 RAW recording options

Heads up—there’s a new Blackmagic update in town, and it’s a big one.

The last 3 models in the Blackmagic Pocket Cinema Camera series (4K, 6K, and 6K Pro) have all been highly successful on release, managing to hit the sweet spot between quality, features and price.

However, just because a camera looks great on release doesn’t mean the job is finished. Like any respectable manufacturer, Blackmagic has listened to user feedback and continued to research and analyze, refining and making tweaks to ensure their product is even better than when first produced.

This Blackmagic camera update is one of their most significant to date. It comes packed with new features that promise to upgrade and improve the already brilliant Blackmagic software.

This is the much-anticipated Blackmagic Update 7.3.

In a nutshell, these are the major updates and features coming with this Blackmagic Pocket Cinema Camera update:

Below, we’ll take a look at these various Blackmagic firmware update features in more detail.

Blackmagic update 7.3 implements an RGB histogram with added color channel clipping indicators. It’s a very nice upgrade to the original luminance histogram. Now, whenever you over-expose, these indicators will light up to let you know that you’re clipping. It’s a small touch, but we appreciate it.

False-color view was always an option with previous versions of Blackmagic software, but the 7.3 firmware update finally adds a guide. Previously, there was not really any way of knowing what the colors on screen represented unless you understood Blackmagic software on a deep level. This guide is a very welcome (and oft-requested) addition that helps users easily identify and understand what they’re looking at. It’s a little small on screen, but that too has its benefits, as it doesn’t impair your image.

In the Blackmagic update announcement via Twitter, details were a little short, and at this writing, Blackmagic hasn’t provided many more specifics. The autofocus on Blackmagic Pocket Cinema cameras was never great, to begin with, and to be honest, we haven’t been able to tell any difference. Sorry to disappoint here, but we’d still recommend using autofocus only when you’re setting up a static shot and can’t see the screen clearly enough to do manual focus well.

As for lens control improvements, we presume they’ve added compatibility with more lenses, but that remains to be seen.

Similarly, with focus peaking updates, the jury is still out. Users haven’t really noticed much of a difference at all, with some even claiming they preferred it on the previous Blackmagic camera update (v6.9.6).

This is a big one. Many Blackmagic Pocket Cinema Camera (especially 6K Pro) users have found that sometimes, the image on their screen was way off in terms of colors and white balance. It’s commonly called the ‘blue tint’ issue. This BMPCC firmware update doesn’t address the ‘blue tint’ issue directly but instead lets you calibrate the screen as you wish, using the new LCD screen calibration option in the Settings menu.

Using a few sliders on the touchscreen interface, you can get the ‘correct’ image on your LCD screen very easily. For further tweaks in future updates, we wouldn’t mind seeing some numbers on the sliders so that if, for whatever reason, you have to reset the camera or calibrate the screen again, you know the exact settings you’re looking to dial in.

Any previously known issues when it comes to importing LUTs and presets into Blackmagic software should now be ironed out. So far, so good. We haven’t encountered any troubles! 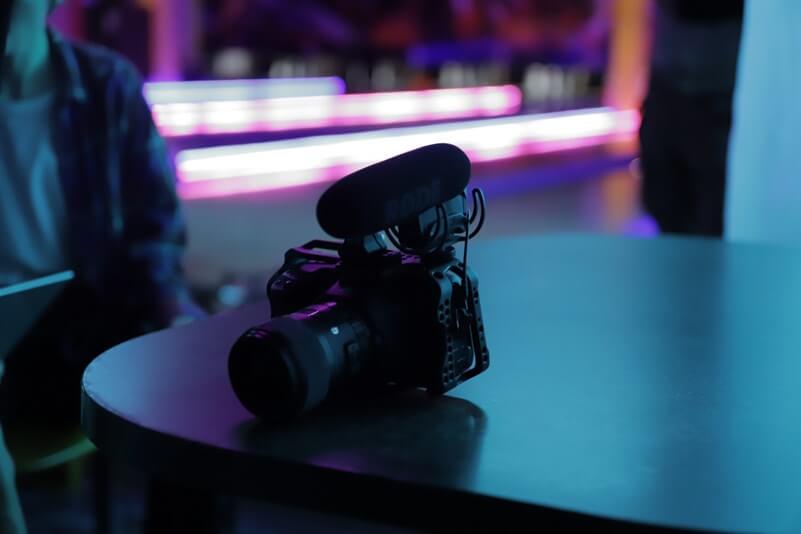 In the Blackmagic Pocket Cinema camera update 7.3, there are some further, much-welcomed features and additions for the older 4K and 6K models. These are as follows:

Yep, this BMPCC firmware update delivers Generation 5 color science—pretty big news if you’re using the BMPCC 4K or 6K! We’ve found that with Gen 5, the log image is a lot flatter, allowing you seemingly get ‘more’ dynamic range. This means more details in the shadows and highlights and, in our opinion, a much smoother highlight roll-off too. All in all, Gen 5 color science means better image quality. If you want to know more about color grading, check out our in-depth article on color correction.

This may not seem like a big deal, but every little thing helps. With the BMPCC 4K firmware update, you can now set your screen to automatically dim after a certain period of time. This applies to the BMPCC 6K firmware update too.

Alongside the Blackmagic camera update, 7.3 also delivers for other Blackmagic software. Here’s what we know so far:

For Blackmagic RAW 2.0, there are several updates.

So, that’s Blackmagic update 7.3! All that remains now is for you to download it and get rolling. To do this, head to the Blackmagic support page to download the Blackmagic firmware update for your specific camera. The download comes with a quick guide, and the steps are all pretty self-explanatory. If you need further assistance, this video should do the trick!

Overall, we think the BMPCC firmware update is brilliant. There’s still some work to be done and a bit of fine-tuning, potentially with a v7.3.1 tweak, but the upgrades and additions are very welcome and genuinely improve the performance of what were already very efficient pieces of gear. It shows that Blackmagic is listening to their customers and user base, and that really matters. Happy shooting!

If you’re currently weighing up a new camera, perhaps our article on mirrorless vs DSLR cameras will help you out.