We continue our series of articles where we look at some iconic in the history of cinema and analyze some of the elements that made them so memorable.

In this post, we’ll take at Joel and Ethan Coen’s dark psychological comedy Barton Fink, which celebrates its 30th anniversary this month and look at some of the elements that make it such a clever and immersive piece of cinema.

Barton Fink tells the story of a bohemian New York playwright (John Turturro), whose overnight success and instant hailing as the new ‘voice of the common man’ leads him to Hollywood. Hired by Capitol Pictures to write a B-movie about wrestling, he checks into a sweaty, rundown, seemingly empty hotel ‘to live among the common man’. There he meets the simple and over-friendly traveling insurance salesman Charlie Meadows (John Goodman) with whom he develops an odd friendship.

Struggling with feelings of being a phony sell-out and suffering from writer’s block, Fink seeks inspiration in vain. Even turning to one of his literary idols, W.P Mayhew (John Mahoney), proves disappointing, as he turns out to be an alcoholic and a hack. Mayhew’s personal assistant/lover/ghostwriter Audrey Taylor (Judy Davis), tries to help the struggling Fink, but that’s where things take a dark turn.

A jab at Hollywood…and at Writers

The Coen brothers wrote Barton Fink while having their own writer’s block working on the mob thriller, Miller’s Crossing. It was a way for them to deal with being stuck, and it proved to be a pretty productive outlet, collecting 3 major awards at the Cannes Film Festival (Palme d’Or, Best Director and Best Actor).

In the beginning, the film seems like a David vs. Goliath tale of a hapless writer who faces Hollywood, an oppressive and omnipotent organization that is basically a factory for formulaic cinema. First, there’s the head of Capitol Pictures, Jack Lipnick (Michael Lerner), who asks Fink, “You want a dame or an orphan?” when discussing who will be the hero’s interest in the wrestling film. In another scene. Lipnick’s enigmatic assistant Lou Breeze notifies him, “The contents of your head are the property of Capitol Pictures.” 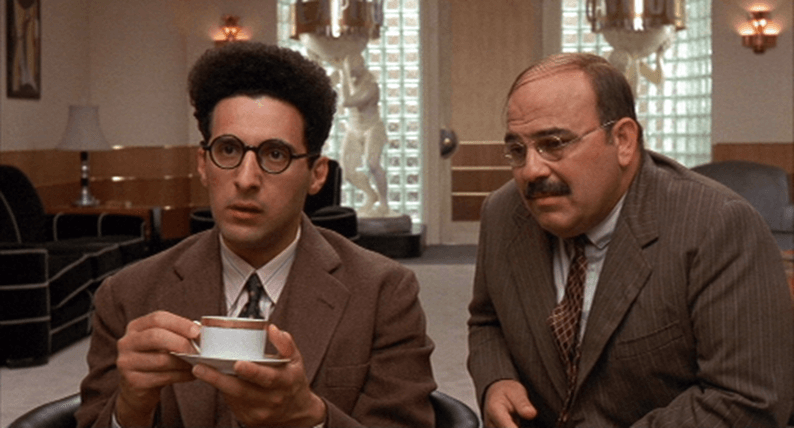 The Coens tell the story purely from the perspective of their protagonist, and there’s almost no scene where he’s not present. This point of view takes us inside the mind of the writer. You experience with him the disorientation he feels when arriving in Tinsletown and the sense of unease, anxiety and uncertainty associated with his writer’s block. 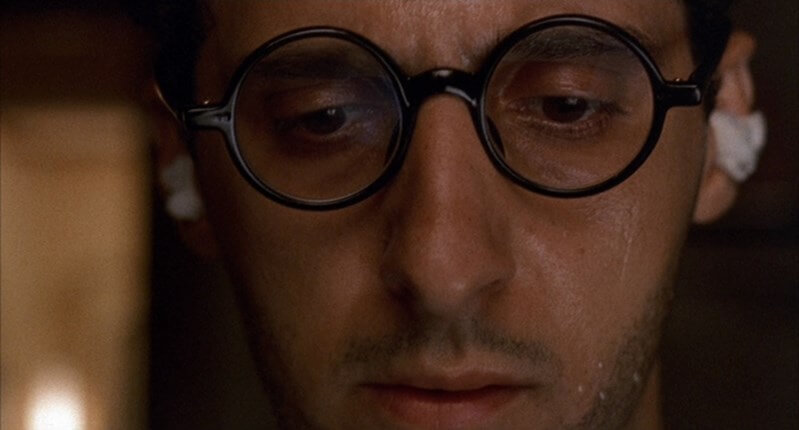 But Fink can’t hide his flaws from us, and they become more and more apparent as the film progresses. His speeches about bringing the theater to the Common Man become hyperbolic and semi-coherent rants. When Charlie says to him, “I can tell you stories,” giving Barton an opportunity to listen to the simple people he claims to represent, he cuts him off. It becomes evident that Fink is a self-absorbed, arrogant and pretentious hack.

A masterclass for writing supporting characters

One of the elements that make Barton Fink so rich and memorable is its collection of enigmatic and eccentric characters Barton meets on his trip. Of course, the obvious main supporting character is Charlie Meadows, who turns out to be serial killer Madman Mundt.

The over-friendly, uneducated and burly Meadows is the antithesis of Barton and his geeky, snobbish and pompous nature, which makes the writer’s character and flaws stand out. The relationship between the two starts with Fink feeling superior to the endearingly overbearing salesman, but the balance shifts when the story takes a dark tone. The hapless writer becomes dependant on Meadows, blindly trusting him with covering up for the crime he might become a suspect of. 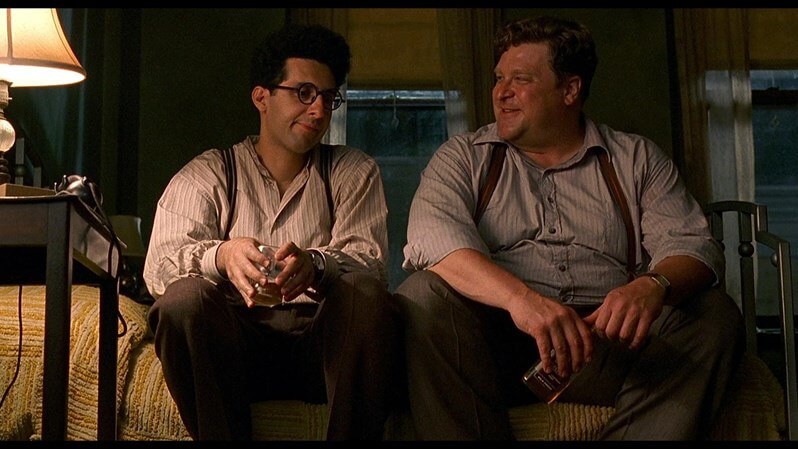 When Meadows’ real identity is revealed, we realize Mundt listened to Fink’s troubles and tried to help him, albeit in a very twisted way. But it worked. Barton snaps out of his writer’s block and goes on a writing spree, completing what he calls “the best work I ever wrote.”

“But Why me?” Barton asks, to which Mundt responds angrily yet to the point, “BECAUSE YOU DON’T LISTEN.” 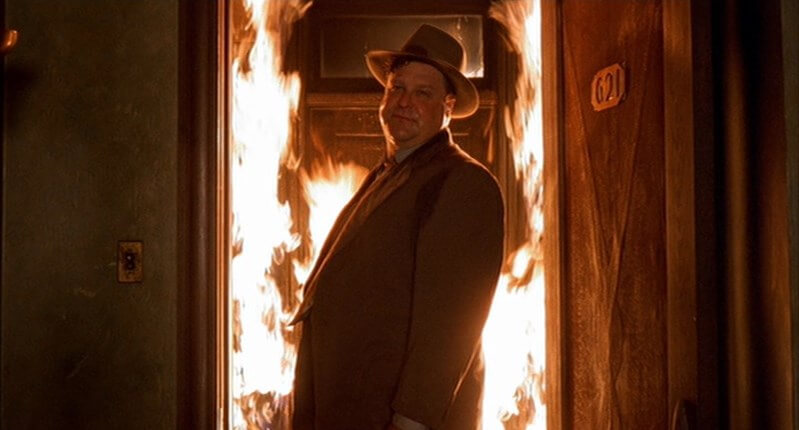 And while the Coens’ recommended method for dealing with writer’s block probably doesn’t include befriending a serial killer and sleeping with your idol’s lover, their main message from this film is that in order to write, you have to stop living in your own mind. You need to open your ears and listen to the outside world.

The Sights and Sounds of The Earle

The 2nd supporting character I’d like to focus on is not human, but the hotel, The Earle, a regal dump that feels as suffocating as it feels vast. Conjuring up The Overlook Hotel from Stanley Kubrick’s The Shining, with similar long empty corridors, The Earle establishes the surreal nature of Barton Fink, and some argue that it represents the writer’s mind and that the whole film (especially the 2nd part) takes place in a dream. 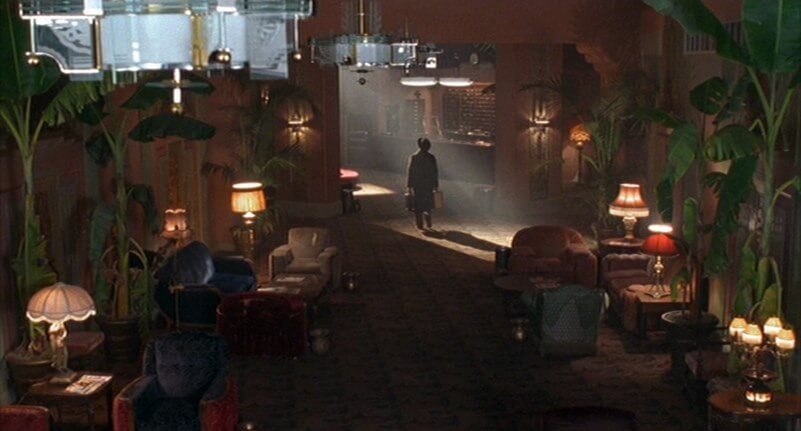 The brown-heavy color palette with touches of green serves to enhance the feeling of dampness and humidity.

Barton Fink is the Coens’ 4th feature, but their first collaboration with legendary cinematographer Roger Deakins, who went on to shoot almost all of their films since. Deakins uses tracking shots along the corridors that again 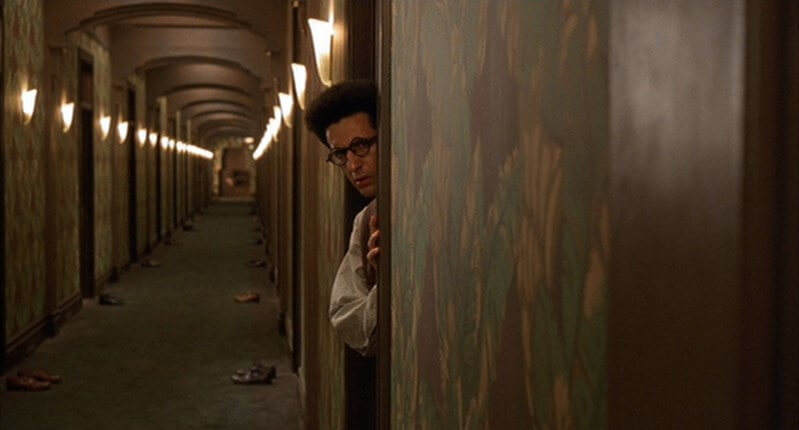 The Earle is also full of sounds, and the sound design beautifully sets the creepy, tense, haunting and damp atmosphere. First, there are lingering sounds that set a general sense of uneasiness, like the service bell whose ring won’t stop and the pestering mosquito whine. Then you have the mysterious events that take place in the other hotel rooms, which are only heard and never seen, adding to the eeriness. Finally, squishy sounds like the wallpaper peeling off the wall give a greater sense of the heat and humidity.

The Coens Brothers’ Barton Fink is a sharp satire that feels very relevant 30 years later. And while it is one of their less communicative films, thanks to a great ensemble cast of supporting characters, strong cinematography and witty writing, it stands as one of their best films to date. If you like the Coen brothers, check out our article celebrating Fargo’s 25th anniversary.

Legally Blonde 20 Years Later: How Does It Stand the Test of Time?

Spec Ads: What They Are, Why You Should Make Them and How

How to Use Stock Footage When Editing Your Videos

How to Add Captions on TikTok: A Beginner’s Guide