The new Zhiyun Crane M3 gimbal is very small and light
It has a vlogging feature and it allows you to lock its axes
The Zhiyun gimbal is great for vloggers, beginners and pros, who use an APS-C camera

Have you ever seen other YouTube videos that have this smooth buttery footage? How do they get rid of all those micro jitters that you see in your own footage? They’re likely using some sort of camera stabilizer, and in this article, we’re going to be talking about one specific type of stabilizer – the gimbal. So say hi to Zhiyun’s newest gimbal – the Zhiyun Crane M3.

We asked our very own YouTube channel host Ezra to try and figure out if this gimbal is good for high-quality content creation. Can it get rid of all the micro jitters you might have in your footage? Will it level up your videos? And most importantly, what you’re all probably wondering, can it vlog?

First, full disclosure: Zhiyun sent us this gimbal for free, but this is not a sponsored review. They sent the gimbal to us as a gift, but we’re making this review of our own volition. We were not incentivized at all to make this video. We just wanted to review it because… spoiler alert – we find it to be a really cool piece of gear.

Now, we did a test to see if it can actually vlog. So you press a button 3 times, and…

This thing is very small, the size of a small water bottle, and super-duper light, weighing around 730g.

You’re probably asking yourself, “Why at all would you want to vlog with a gimbal?” Well, if it’s light enough and it gets the job done, you can have a very smooth vlog with minimal camera shake. Moving on from the vlogging feature…

Check out this b-roll we shot with the Crane M3 to see what you can do with it.

This b-roll sequence not only features Artlist music and royalty-free SFX from Artlist, but it is also intercut with some stock footage. It shows how well the footage shot with the M3 can be cut with high-quality footage like the footage from Artgrid.

If you like what you saw in the sequence and what you see throughout this entire video, check out Artlist and artgrid in the links below.

License this footage on Artgrid here.

License this footage on Artgrid here.

On with the review.

First off, let’s look at the physical attributes of this gimbal. It’s in white matte color, hopping on the recent trend of white-colored cameras and accessories. 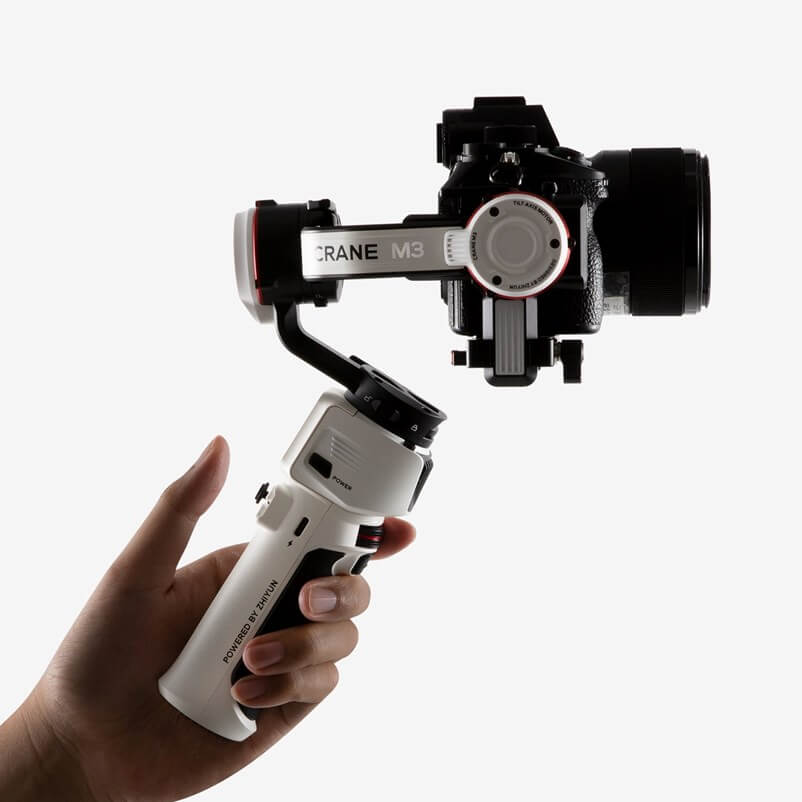 As convenient as it gets

Now let’s examine the size of this thing. The fact that it’s so small makes it very convenient.

Another feature worth examining is the quick release plate, which lets you through it. This plate is very useful because you slide it directly onto the gimbal without having to knock it out of balance when switching batteries or moving it a bit. So while the Crane M3 is a 3-axis gimbal, that extra base plate turns it into a bit of a 4-axis gimbal when you’re balancing it, saving you a lot of time, and that’s awesome.

A feature that many gimbals have these days, and fortunately, the M3 has it as well, is the axis lock system. When you’re trying to balance out your gimbal, you sometimes want to focus on 1 axis at a time. So now you can literally lock every axis separately and focus on each on its own. It makes it a lot easier to customize and really zero in on your balance before you start using the gimbal.

Zhiyun actually sent us the pro kit, which includes, oddly enough, a microphone and a mic setup. It also has the TransMount expansion pack, which attaches directly to the gimbal’s bottom and to which you reattach the legs. This is where you connect the mic. It’s an interesting direction for Zhiyun, but the mic’s quality is out of the scope of this review.

The gimbal also comes with a phone mount, so you can attach your mobile phone to it and be a mobile filmmaker. It’s very strong and sturdy, and we’d trust our phones with this.

How much does the Zhiyun Crane M3 cost?

Who is the Zhiyun Crane M3 gimbal for?

The bottom line is that this is a great go-to gimbal for vloggers who also like to do travel videos.

It’s also great for beginner content creators who use cameras with an APS-C sensor size who don’t want to invest in a big gimbal.

And in all honesty, it’s great even if you’re a professional shooting with an APS-C. It’s super light, very easy to use, and the balancing is pretty standard or even easier thanks to its small size.

Overall the Zhiyun Crane M3 is a pretty awesome gimbal.