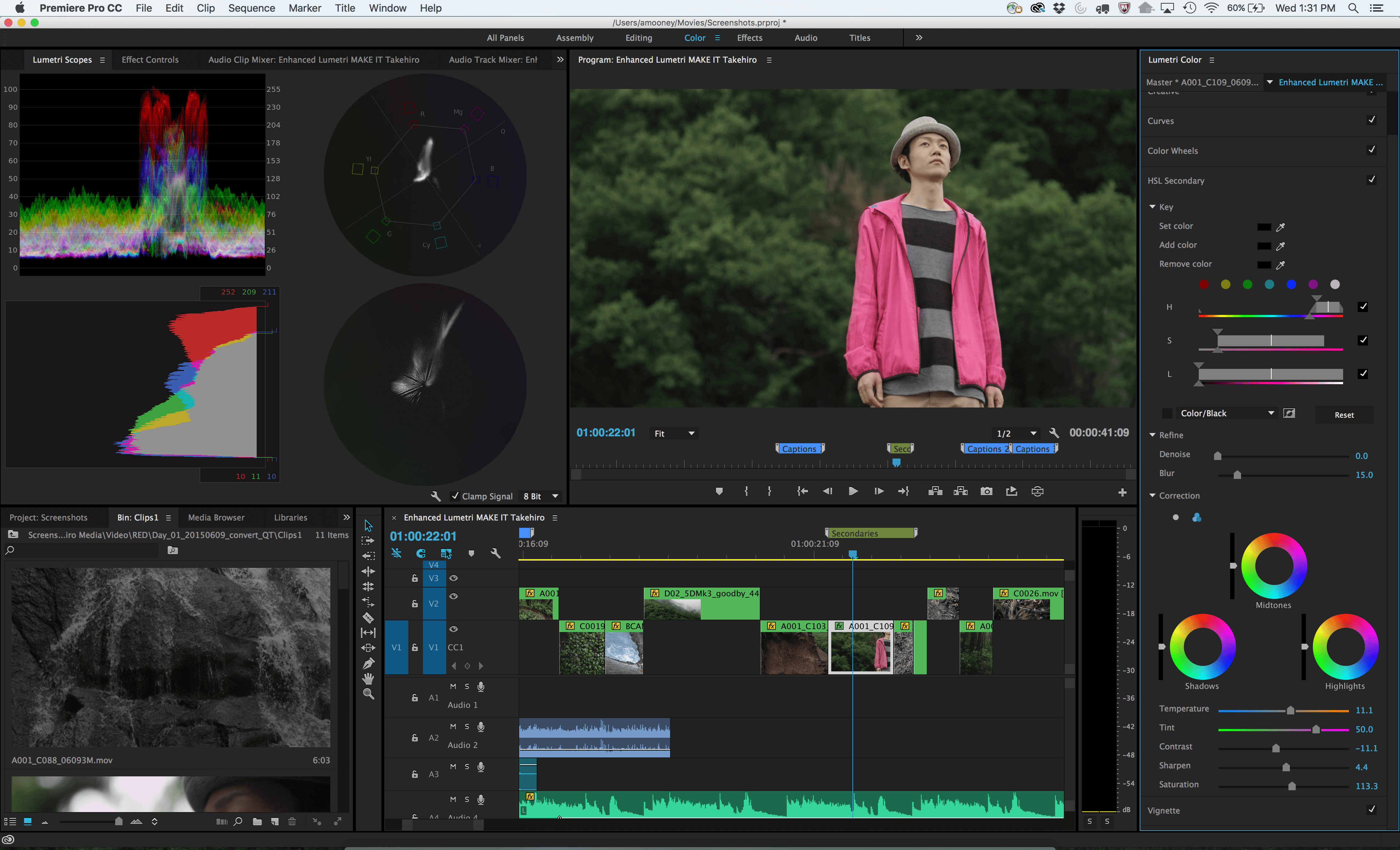 This evening, Adobe unveiled the latest updates to Premiere Pro. With this latest update, the company’s NLE will add native virtual reality workflows, HSL secondaries for more advanced color correction, the ability to automatically create lightweight proxy files upon import, and plenty more. Here’s a rundown of the major features that will be added in the upcoming release.

Though Premiere has always been great in terms of native support for almost every type of media imaginable, many of today’s workflows — particularly with high-resolution RAW media — require proxies for the offline edit to be as efficient as possible. In the latest update, Premiere allows users to automatically create proxies upon the import of media. Even better, even while you wait for the transcoding to finish (which takes place in Media Encoder), you can still edit and work with the original files. Once the transcode is complete, Premiere will automatically switch to the proxy version of the media. Here’s a quick video showing you how it’s done:

Last year, the Lumetri Color Panel was the talk of the town when it was unveiled. Not only did it bring much of SpeedGrade’s power directly into Premiere, but it did so in a way that was incredibly intuitive, and in a way that made getting great results relatively simple. This year, the Adobe team has expanded the Lumetri Panel’s functionality even further, adding in the ability to use HSL secondaries, which give you the power to manipulate certain tonal ranges very precisely. They also improved the scopes and added a plethora of new linear SpeedLooks from the folks over at Looklabs. Here’s the rundown of the new color features in the 2016 update:

Though many of the new features are pretty flashy, the Adobe team has added some features that should appeal to the efficiency freaks inside all of us. Here’s a snippet from the company’s press release about the new features added specifically for making small, often-repeated actions more efficient:

Experience new keyboard shortcuts to add, adjust, and navigate keyframes and zoom in and out of the timeline to view individual frames. A new Range selecting feature lets you automatically scroll the timeline to select additional clips outside your current view while a new Remove Effects command lets you quickly choose to remove a specific effect.

One of the major trends over the past year has been the explosion of virtual reality video. And if I were a betting man, I’d say that trend isn’t going to be slowing down any time soon. For that reason, Adobe has gone to great lengths to add features that make Premiere far more compatible with VR media than it was before. Again here’s a snippet from the press release about the new VR functionality built into Premiere:

VR video mode enables you to work with imported stitched equi-rectangular video to show field-of-view so you know what your viewer is seeing when looking in a given direction. Premiere Pro export will properly flag the file so VR-capable video players, such as YouTube, will automatically recognize it.

And here’s Al Mooney again to show you these new VR features in action:

Like with this year’s new version of After Effects, this is another one of those added feature areas that aren’t all that sexy but will definitely make some people’s lives easier. Here’s the breakdown of what’s being added.

With the explosion of native video on various social platforms (Facebook, in particular, has been killing it in terms of native video), Premiere Pro cc 2016 now has added support for encoding and publishing for specific destinations.

Destination Publishing allows you to deliver video to the most popular social media sites. Twitter has now been added to current support for YouTube, Facebook and Vimeo.

When You Can Expect These Features to Be Released?

Adobe is notoriously tight-lipped when it comes to telling everyone when their major updates will be released. However, if the past few years are any indication, you should expect to see the updates for the Premiere Pro cc 2016 sometime this summer.

Artlist Mood of the Month: Groovy

How to Get Stock Video Footage for Your Project

Why Royalty-Free Chill Background Music is Right for Your Video

An Introduction to the Different Types of Shot Sizes